Microsoft today is rolling out its next feature update version 20H2 called Windows 10 October 2020 Update. Here’s how to get it.

Recently Microsoft started rolling out Windows 10 version 20H2 October 2020 Update. As usual, it is a staggered rollout and starts with compatible devices first followed by more users. Similar to its predecessor, Windows 10 version 2004 May 2020 Update, it is more like a large cumulative update (formerly known as a Service Pack) than a full-blown feature update.

The update does include a few minor improvements and features. Some of the things in the update include subtle UI changes like a cleaner look to the Start menu, the addition of open Microsoft Edge tabs in task switcher (Alt+Tab), and more classic Control Panel items (System for example) moved to the modern Settings app. Here’s how to install the latest version to your Windows 10 system.

The easiest way to get the new update is to manually check for the update under Windows Update. To do that head to Settings > Update & Security > Windows Update and check. If Microsoft’s update system thinks you’re ready for the update it will show up on the screen. Simply click the “Download and install” link. 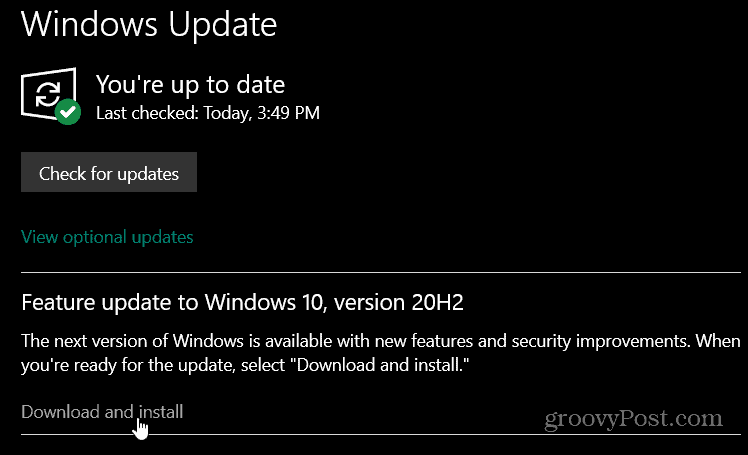 While the best thing to do is wait until Windows Update determines your PC is ready for the update, you can force it. If you are an experienced user and ready for possible stability issues, you can install the update manually. Head to the Windows 10 download page. Then click the Update now button to download the Update Assistant tool. Launch the tool and follow the on-screen instructions.

It will check to see your system’s RAM, CPU, and disk space to determine it is compatible. If everything is good to go (and if you’re running the May 2020 Update it should be) the update will begin. The process is straightforward. Just click a couple of buttons and wait while the update completes.

Again, it is similar to a large cumulative update. Version 20H2 will install on your system. During the update, your computer will need to reboot to complete the process. So make sure to set aside some time during the day or kick it off to complete overnight. Depending on your system and internet connection the process should take around 30 minutes to install.

For best results make sure to back up your most important documents and files. It’s also important to do a full system backup before kicking off the update. That way, if something were to go awry during the update process, you can return to the previous state.