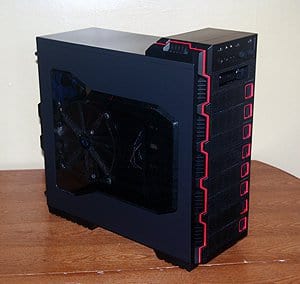 Looking to expand your computer’s hard drive horizons? Installation is easy with just a little bit of knowledge, and you can get it from this guide.

Does your computer need more storage space? Did your hard disk drive (HDD) die? Or are you just looking to upgrade your system to a Solid State Drive (SSD) and use your old drive as a pack mule? Whatever the case may be, the task of installing and moving around storage disk drives is easy after going through it once. And the good news is it’s relatively the same for all computers. Below I’ll show you the ropes. 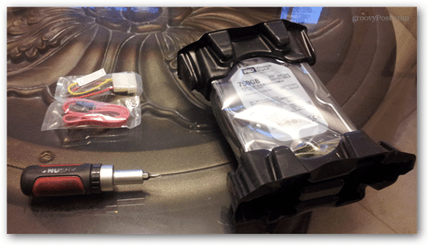 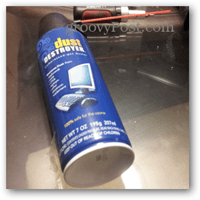 The first thing to do is make the computer accessible. Flick off the power supply switch and then unplug the power cord and everything else. You need to remove the sides of the desktop case. 9/10 times this is done at the rear of the tower. On a typical box there are 4-6 screws overall that hold both side panels in. You want to remove all of these. Depending on the type of screw you may or may not need a screwdriver. 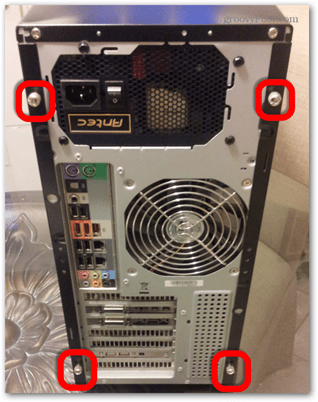 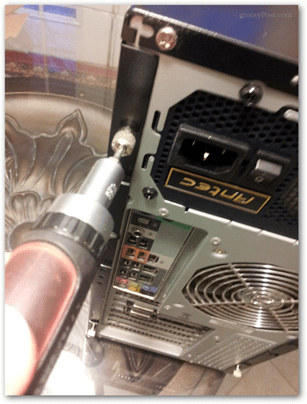 Now with the sides of the case open, the first thing to do is locate your SATA ports. Usually these are easy to spot just by looking for the bright red SATA cables that are plugged into them. On the computer I’m working on in the pictures, the motherboard specs sheet on this computer told me it had 6 ports. The first two were easy to find, but only after moving and removing a few cords was I able to see the remaining 4 ports which orientated in an interesting sideways layout. Also, if you unplug anything while doing this be sure to remember where it goes!

The reason for noting the location of these SATA ports is that you need to make sure the cable you’re going to plug into the new disk drive will have a nice clean path. SATA cords have are ergonomically terrible, meaning they fall out of their ports way too easily if anything bumps up against them or any pressure is put on the cord. 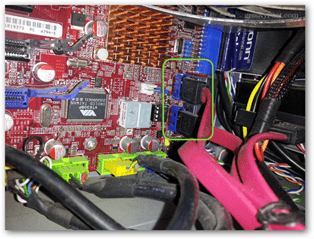 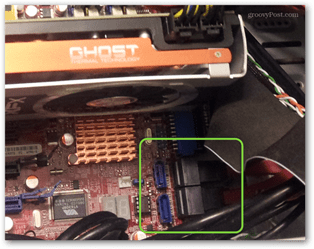 Now it’s time for us to find where the new disk drive will mount. If you’re replacing an old drive it will be obvious to just put it in the exact same spot. However for a new drive there are probably a few options. In this computer I decided to put it below the already installed SSD. 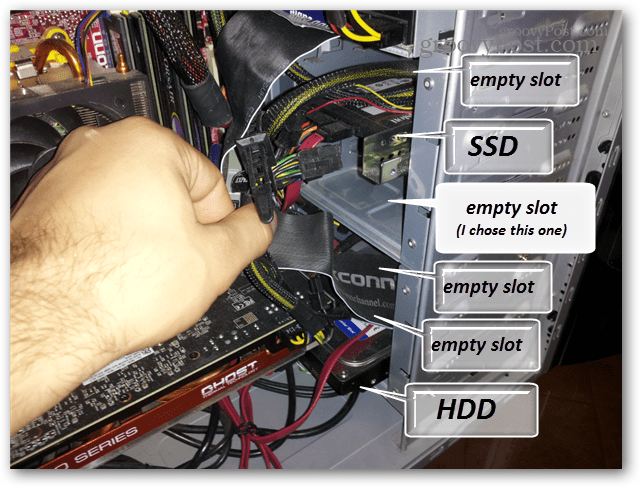 In a typical case the mounting is done by sliding the drive in and then screwing it directly to the holes in the case. Although, the case I’m working with today is not that typical as you’ll see in just a minute. 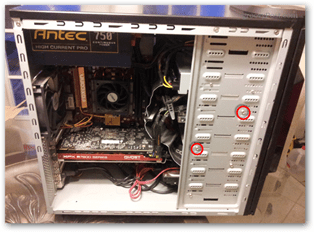 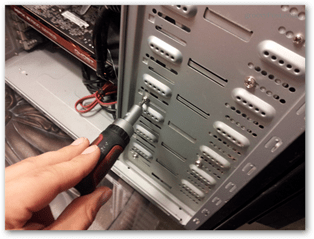 Screws are also located on the opposite side of the case, and should be mounted in at least 4 of the screw holes on the sides of the HDD. 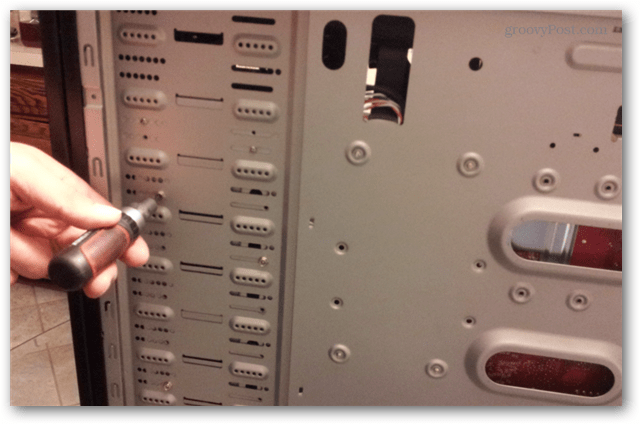 Interestingly, the case I was working with today ended up having drive bay racks inside of it. This meant that I had to remove the rack and then install the new disk drive into while outside of the computer. So at this point, all of the existing HDD’s are out of the computer, and it’s ready for an install. 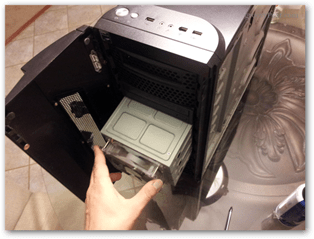 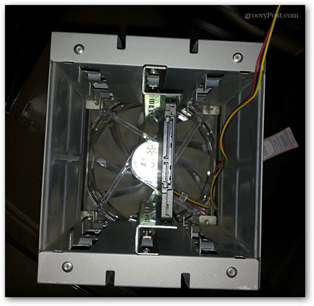 Now is the time to dust out the case. The first things I like to clean are any fan filters, with the compressed air you can thoroughly blow them out. Also the inside of the case and the actual fans most likely need to be dusted. Pretty much everything needs to be cleaned out with the compressed air. If you rinse the filters, be sure that you don’t use water anywhere near the inside of the case.

The reason to wait until now to start cleaning is to avoid blowing a lot of dust around while a hard drive is still in the computer. Dust kills hard drives, so you want them far away from it before you start blowing it around in mass. This only applies to HDD’s, as SSDs don’t have moving parts that can be damaged by dust. If you need to clean a HDD blow dust it separately from the case. 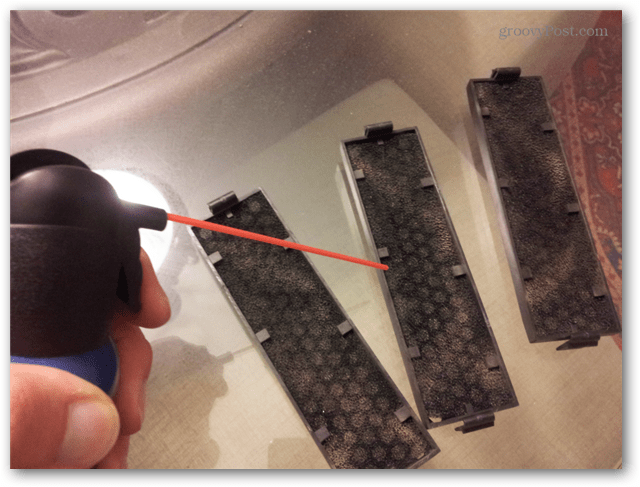 Now that the computer is all cleaned out. Time to install the new drive. In the picture below is a 750GB HDD. As far as orientation goes, you could put it in upside down, sideways, or whatever way you want. The normal way of doing it is either sideways or with the circuit board down, just to help deter dust from building up near cracks that lead to the internal components of the drive.

In this case I mounted the drive in the removable drive bay. I also had to improvise and grab a longer screwdriver as my stubby ratchet couldn’t reach. When installing the screws you want to make sure they are tight, but not overly tight to the point they are straining the drive/case or stripping out the threads. 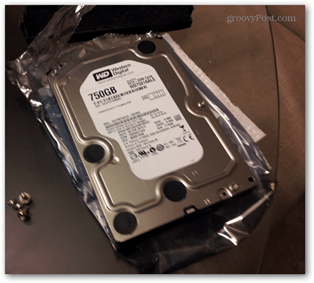 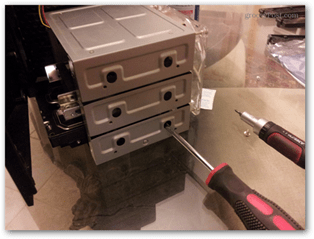 A good way to check if its tight enough is to try to gently try to jiggle the drive with your hand. If it doesn’t move at all, you’re good. Vibration is really bad for a drive, so you want to be sure it’s in there solid. 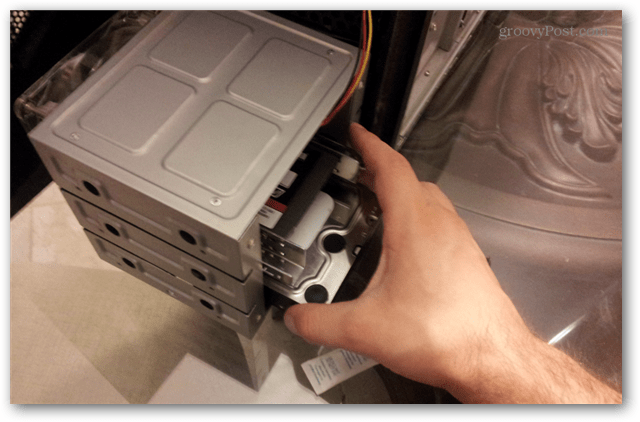 Now just put everything back in, connect the cables, and you’re ready for a test run. Make sure that there isn’t anything pressing up against the SATA cords and that they are completely plugged in to both the motherboard and the drive(s). Figuring out how the SATA power and data cables plug in is really easy – there is only one way they will fit! I suggest that before putting the side panels back on the case that you make sure everything works.

Now just put the computer back in its normal spot at the desk and plug the power, keyboard, monitor, and anything else back in. 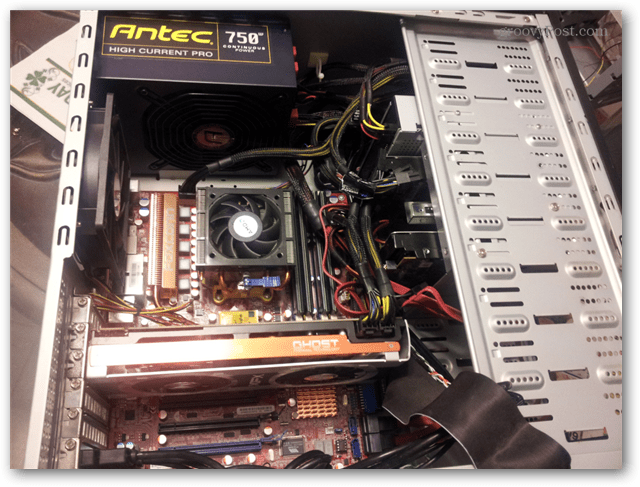 You could boot the computer up into Windows, but its faster to just check the drive from the BIOS. Press the power button and before it begins to boot up Press the F2 or DEL key to go into the BIOS. Once inside, there should be an option for something along the lives of Drives, Storage, or Disks. In the bios pictured the option was called Hard Disk Drives and found under Advanced Bios Options.

If you see the name of the drive showing up in the bios, congrats! This means that the computer recognizes the drive and its plugged in properly. 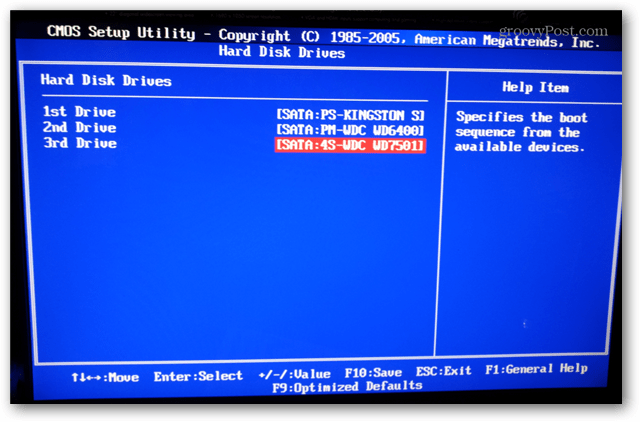 At this point what you do next depends on whether you’re replacing an old operating system drive or just adding a new additional one.

If you boot up your PC with after installing a drive fresh from the manufacturer, chances are it won’t show up as a Hard Disk Drive in Windows Explorer file browser. That’s because it needs to be partitioned.

To start the process open up Windows built-in Partition Manager. This can be done by typing in “diskmgmt.msc” into the search box. (Works the same in  Win8 search). 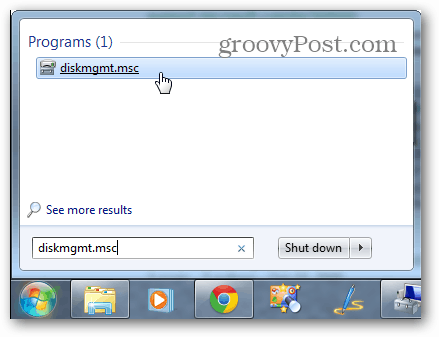 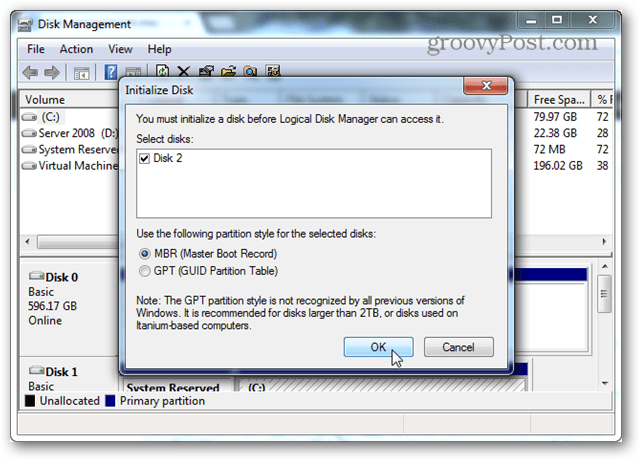 Now scroll down the page to the empty disk. It should have lines going through its space and labeled as “Unallocated.” Right-click the striped area and select “New Simple Volume…” 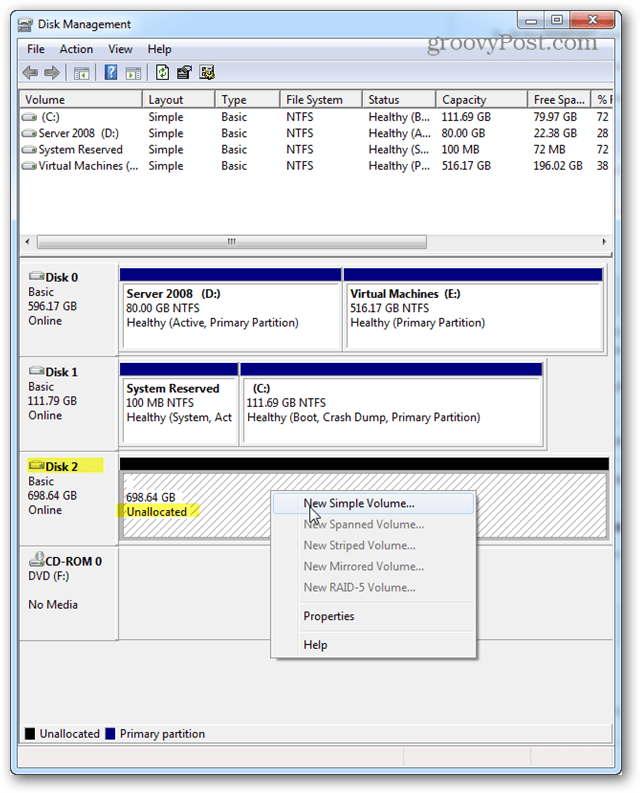 For Volume size it should probably be left at whatever Windows set as the default, which should be the Maximum available disk space listed just above it. Click Next. 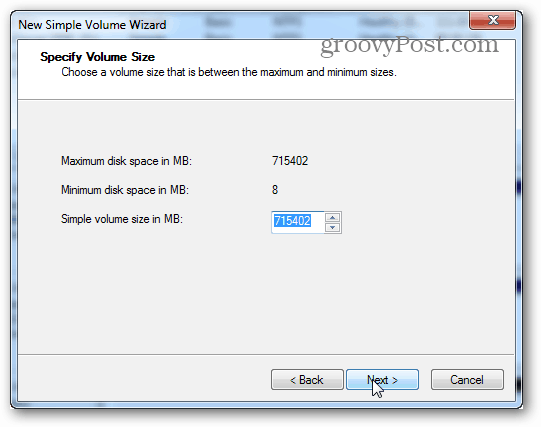 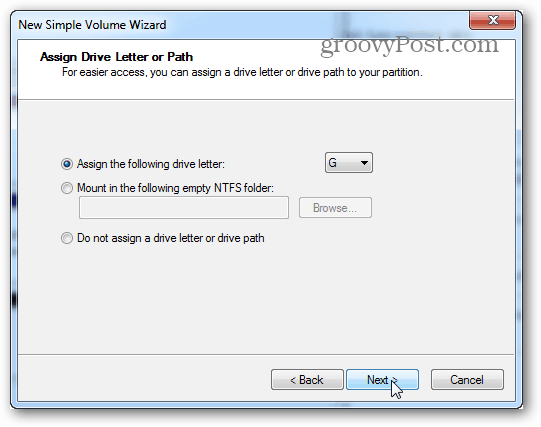 Now for the format screen, the default is NTFS and it should be left there unless you’re planning something special for the drive. Same goes for allocation unit size. The volume label is the drive name and can be whatever you want. Set it to “perform a quick format” and click Next. 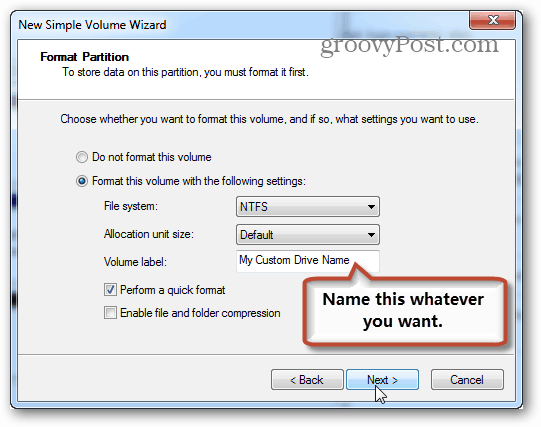 Once the format is done the drive should show up in Windows Explorer and is ready for you to start saving things to it. All done! 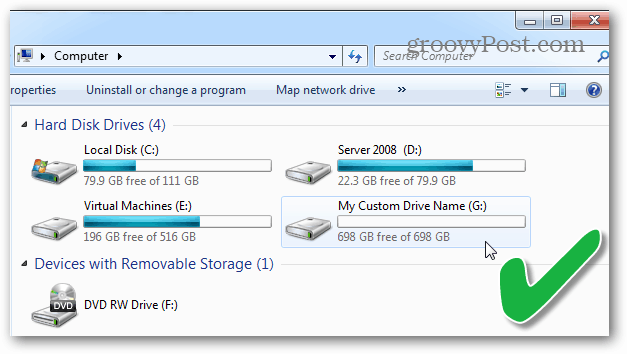 Did you just finish installing the new drive and now the computer won’t turn on? Is it not even showing a bios screen or responding to the reset button? This is actually a fairly common issue, which is easy to fix if you’re lucky.

If you have any comments or questions, please leave them below and the groovy team  & community will be happy to answer them!