How to use MSConfig to remove an OS from a dual boot configuration.

Update: Windows 7, XP, and Vista are no longer supported by Microsoft. For the latest, make sure you are running Windows 10 or above. For more, check out how to dual boot with Windows 10.

A few weeks back I explained how to install Windows 7 in a Dual-Boot Configuration using a VHD file like the Windows 7 System Drive. A few days later I explained how to make Windows 7 in a Dual Boot scenario the primary boot OS. Now after receiving about 20 emails on the topic from readers, I guess it’s time to explain how to undo or delete the Windows 7 Dual Boot configuration. My guess is the testing is done and they are going to wait for the gold bits for Windows 7.

So, let’s get right to it. For your convenience, I’ve included not only the step-by-step instructions but also a how-to video.

1.   Boot into the Non-Windows 7 OS (original OS before you installed Windows 7 as a dual-boot).  For most people, this would mean booting into your Vista install however I’m going to guess there might be a few who set up a Dual-Boot config with Windows 2008 also (me for instance).

2.   Click the Windows Start button and type msconfig and press Enter (or click it with the mouse) 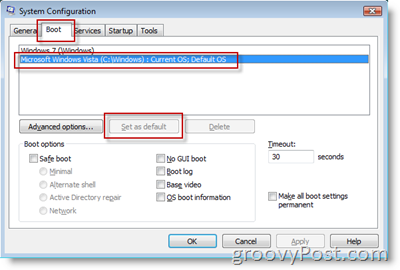 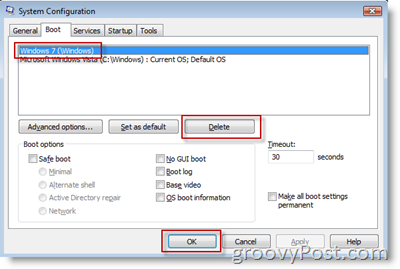 What you just did was remove Windows 7 from the Windows Boot manager so now it will no longer show up when you boot the computer.  Essentially, the computer is no longer a Dual-Boot System (2 Windows Versions installed).

The next steps are to just simply delete the Windows 7 VHD file. 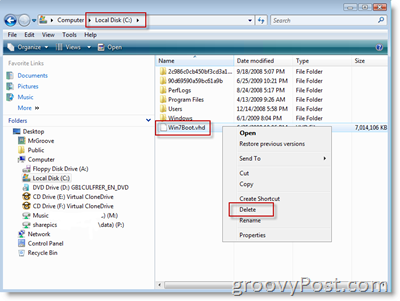