Earlier we covered Bing’s 3D Maps feature and Bing’s Virtual Earth which was very similar to Google Earth. We could probably even call it Google Earth in a Browser.

Now Google Maps got a feature which is almost like a blatant copy of Bing Maps’ Birds Eye View.  I guess I can’t blame them; it was only a matter of time before Google added the technology to their famous Map site.

Google decided to get even with Microsoft and this Friday they announced the release of a new Google Maps feature – the overhead 45-degree view. This feature started out as an experimental feature that Google began developing all the way back in December 2009. 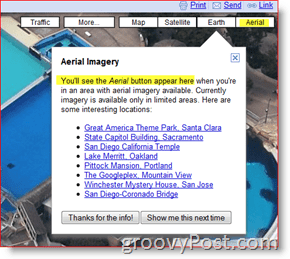 The feature is currently open to the public, but available only in parts of California, Southern Africa, and Europe.  Google says they will expand their coverage in the upcoming months and hope this will be a good addition to Google Maps.

For now, keep an eye on the Google Maps Toolbar/Options for the Aerial Button to appear as this will tell you that the new view is available on your map.