Google recently introduced a new shortcut you can use to create a new document, spreadsheet or other file in Google Drive.

This past Thursday, Google rolled out a very cool time-saving trick for users of Google Drive. Now, instead of going into Google Drive and clicking your way to a new file, you can use Google’s “.new” domains to create the type of file you need. If you are a heavy user of Google Docs and its other productivity apps in Google Drive like Sheets or Forms, this is a real-time-saver. Here is a look at what it is and how to use it.

Instead of going into Google Drive and clicking through the process to create a new document, just type: doc.new into the browser’s address bar and hit Enter.

You will be taken directly into Google Drive and be staring at a fresh new document. If you’re not logged into your account, you will be prompted to log in first. However, once you are logged in, you can simply type in the .new domain shortcut for whatever type of file you want to create. 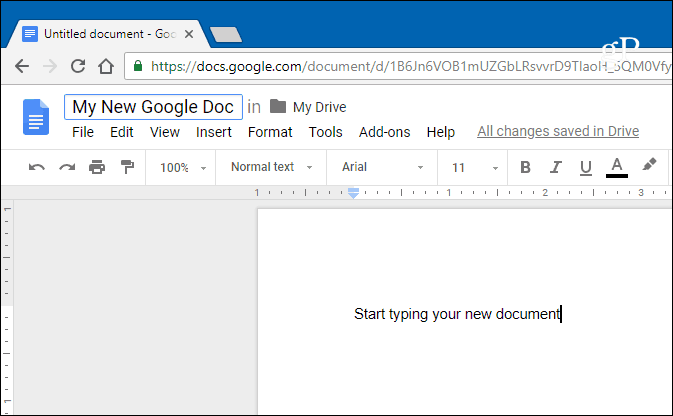 You can use the .new domain to create Slides, Sheets, Sites, and Forms. Although “site.new” only works with Chrome, Firefox, or Safari, it works on any browser. You can even bookmark domains to use as shortcuts so that you can get to a fresh document with one click. Or you can create desktop shortcuts or even send them to the Quick Launch bar on Windows. For example, here, I created shortcuts in Microsoft Edge to each of the .new shortcuts that were announced.

Google actually announced this shortcut on Twitter this past Thursday that displays a GIF you can play, which shows what you can type in to create a new file. It also shows you variations on the commands like spreadsheet.new, for example.

Introducing a ✨ .new ✨ time-saving trick for users. Type any of these .new domains to instantly create Docs, Sheets, Slides, Sites or Forms ↓ pic.twitter.com/erMTHOsdyH

By the way, lots of users are asking for even more shortcuts like “email.new” to open up Gmail to compose a new message. However, that doesn’t work – I tried. Still, I wouldn’t be surprised if Google were to add it and other domain shortcuts for its other services in the future. This is a welcomed new trick if you work out of Google Drive all day or just want an easier way to start a doc.