Here’s a look at how you can manage the music playing on Spotify through Xbox One from your Android or iOS smartphone or tablet.

Microsoft is killing off its Groove Music streaming service this year and pushing users to Spotify. So, it’s important that, after a long wait, the Spotify app came to Xbox One this past summer. Here’s a look at how you can manage what’s playing on Spotify on Xbox One from your mobile device.

With Spotify Connect technology, you can cast music from the other connected devices in your home to the Xbox One console. You can also control playback of the music from your phone or tablet. With the Xbox One app, you can use your phone to control your music playback while you’re playing games or using other apps on the console.

Note: You need to subscribe to Spotify Premium ($9.99/month) to take advantage of Spotify Connect. To get things rolling you will need the Spotify app installed on your Xbox One and your Android or iOS phone or tablet. Also, both devices need to be connected to the same Wi-Fi network.

Control Spotify on Xbox from Smartphone

Launch Spotify on your mobile device and start playing a song. Then tap Devices Available at the bottom of the screen and on the next screen, you will see a list of available devices on your network — select your Xbox One. If you don’t see your Xbox listed, make sure your box is turned on, open the Spotify app on the console, and restart the app on your mobile device. 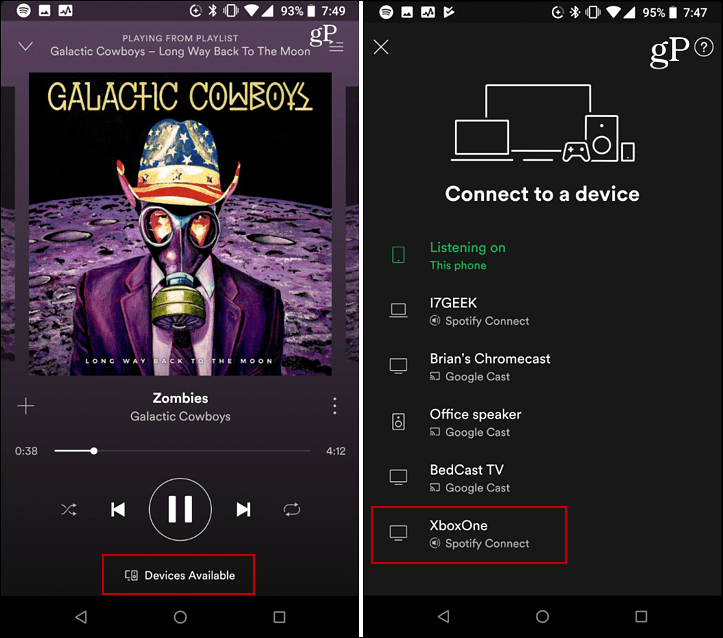 The Spotify Connect feature allows you to cast music from your computer, too. For example, on Windows, launch Spotify and click on the Devices Available link in the lower-right corner and choose your Xbox One. 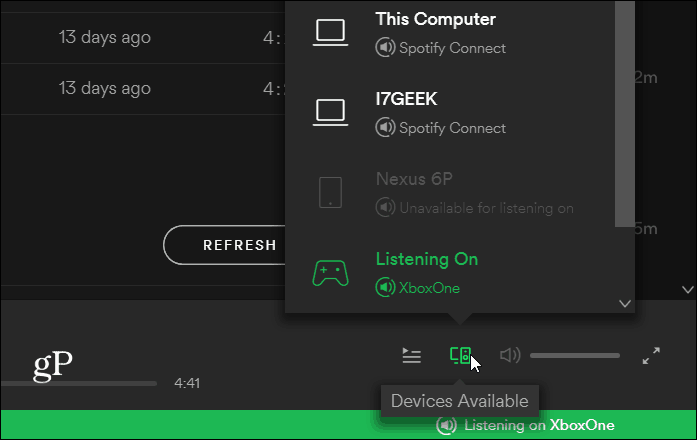 Whether it’s on your mobile device or PC, once the handoff is made, your music will start playing on your Xbox over the TV or connected stereo receiver. You can then choose songs and control playback from your device or computer. The other cool thing is that while your music is playing, you can do other activities on your Xbox as well.

Have you made the switch from Groove Music to Spotify on Windows 10? Do you like the experience with Xbox One? Let us know in the comment section below. Or, for all things Microsoft and troubleshooting advice, head over to our Windows 10 Forums.