Apple Music offers 60 million songs and counting. Here are some Siri shortcuts you can use to make the experience more enjoyable.

Siri Shortcuts remains one of the best features of iOS and iPadOS. Initially launched in 2018 with iOS 12, Siri Shortcuts let you perform everyday tasks (or a series of functions) with your voice or a simple tap or automatically at a specific time or arrival at a location. Some of the best Siri Shortcuts relate to Apple Music, as you’ll see below.

Each Shortcut includes a specific task or multiple actions that get automatically combined into one job. Not all Shortcuts have been designed for manual triggering using a voice or a tap. Instead, these shortcuts start automatically based on location, time of day, or other circumstances.

Some Shortcuts run best as a widget, which you activate directly through the app or from notifications from your device. Others are ideally suited for use on Apple Watch. To use a Shortcut using your voice, you’ll be asked during the install process to record a phase. Moving forward, you activate the Shortcut by saying, “Hey Siri,” followed by the phrase.

Most Shortcuts are found directly in the Gallery section of the Shortcuts app. You can also install Shortcuts by tapping a provided link from a supported device.  Once establishing a Shortcut, it becomes accessible across all of your supported devices.

You’ll find links for every recommended Shortcut below. Tap “Get Shortcut” for the ones you want to get started, then tap “Add Shortcut” or “Add Untrusted Shortcut,” depending on whether the Shortcut was created by a third-party.

The following Shortcuts make it easier to enjoy your favorite tunes on Apple Music and find new songs with less hassle. All links must be clicked on your iPhone or iPad.

The soundtrack of our lives tends to change often. And yet, the old standbys always bring a smile to our face. These Shortcuts are a great way to mix your new and old favorites.

How many songs have you saved on Apple Music? If you’ve lost count (and you should), it’s time for any of these playlists that bring order to your library. 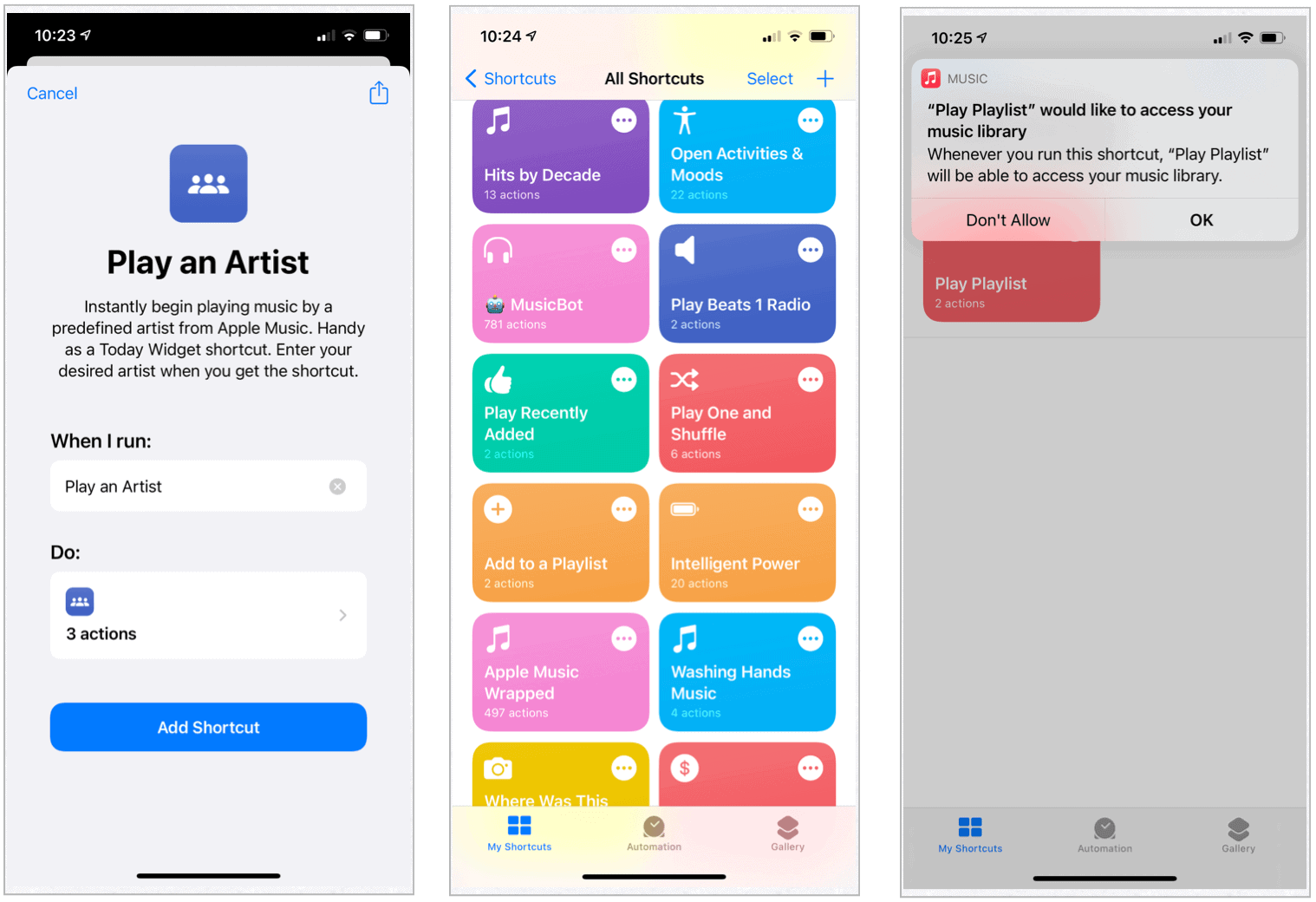 It’s About the Radio

Apple Music continues to add new radio stations to the mix. With the following Shortcuts, your favorites are just a tap away. 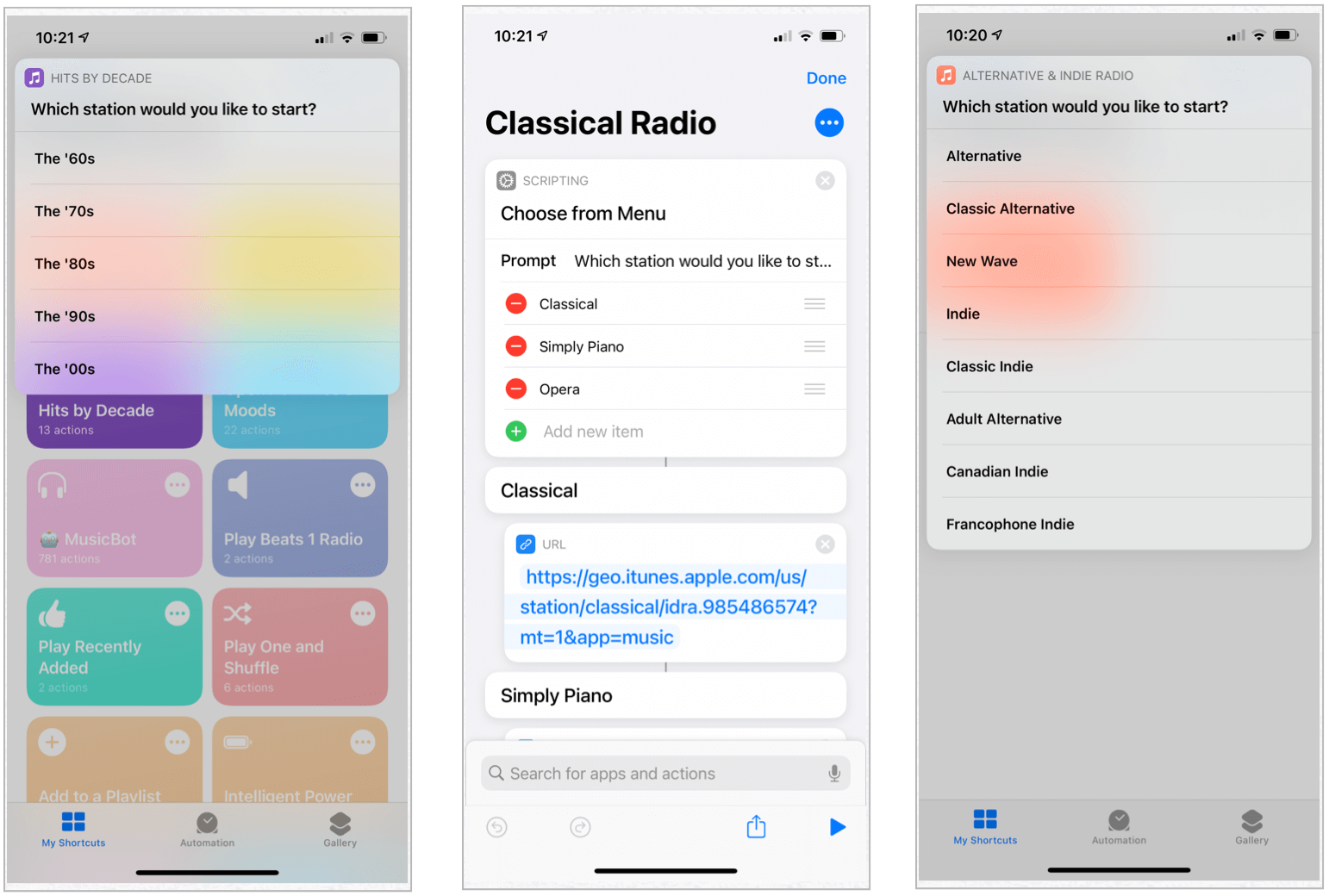 With any of the following Shortcuts, you can add songs and albums to your Queue, so the music never stops playing. 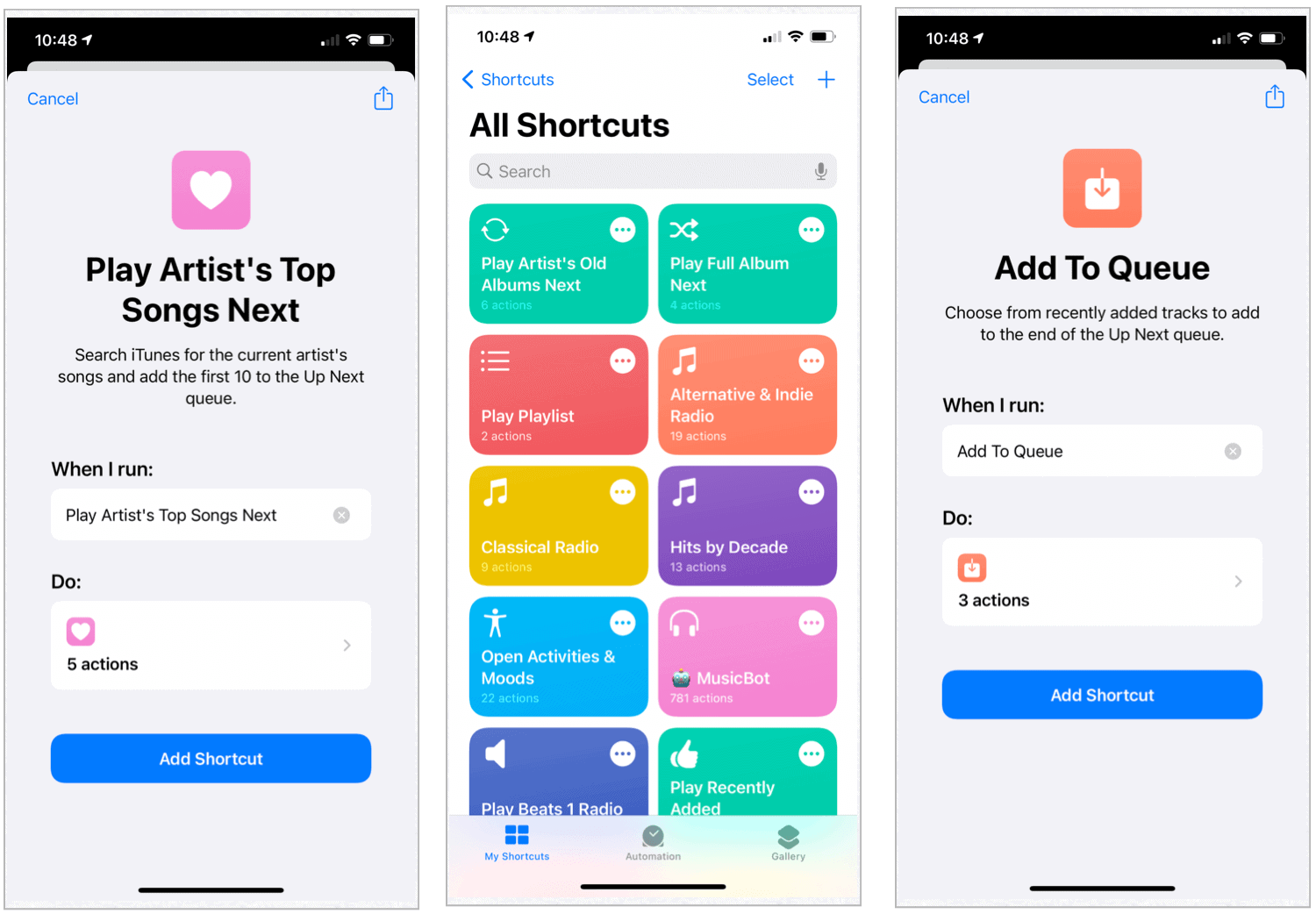 Music is meant to be shared, and that’s where the following Shortcuts come in. Use them to motivate others to listen to the songs you love the most or have just discovered. 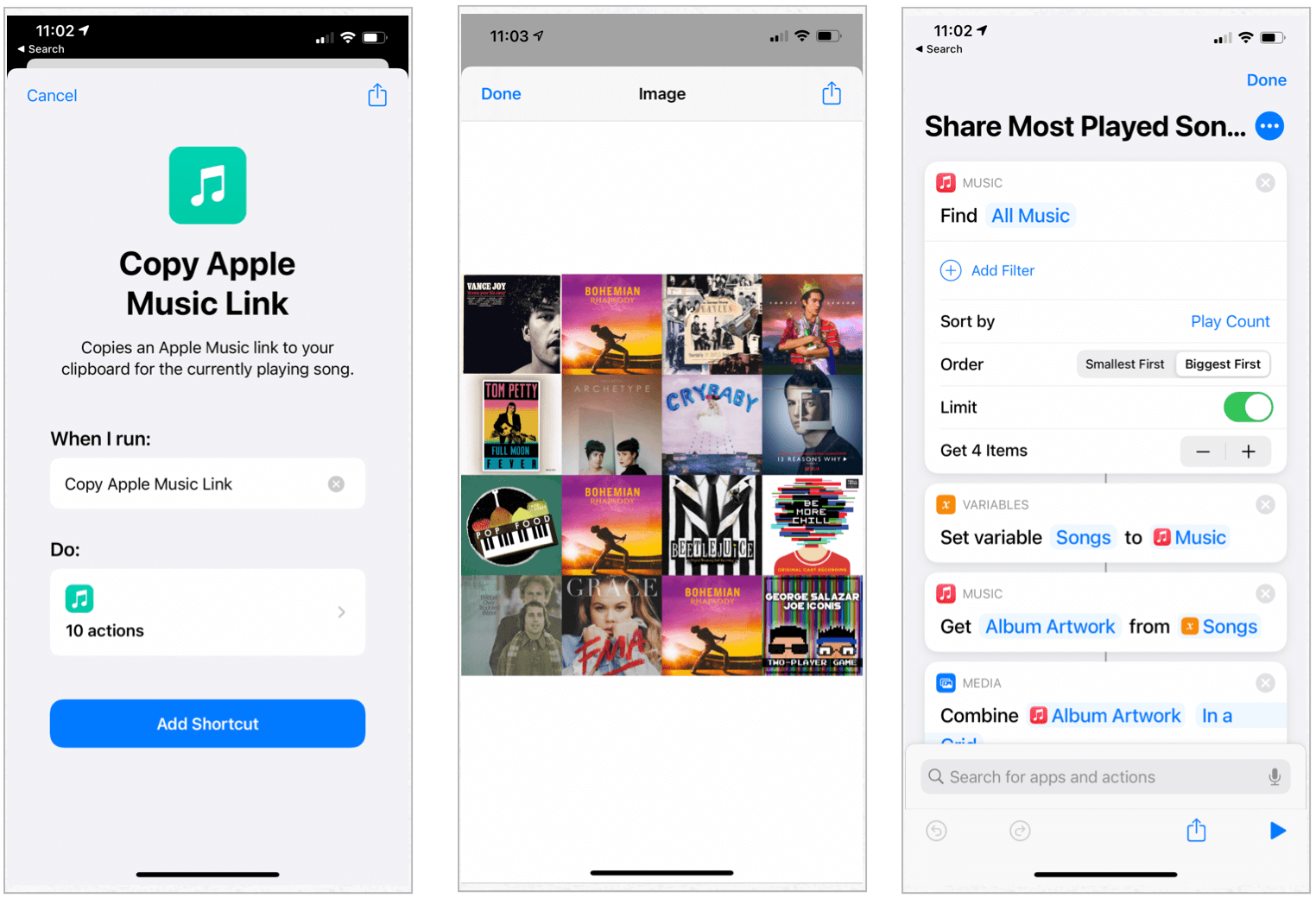 If you’re looking for something extra special, consider the MusicBot Siri Shortcut by MacStories. The Shortcut, which includes over 780 commands (!), is an Apple assistant on steroids. When tapped, MusicBots takes the guesswork out of navigating Apple Music’s sometimes confusing interface. By doing so, you can get to the songs and albums you want to listen to much quicker. The best part about MusicBot? It’s free. 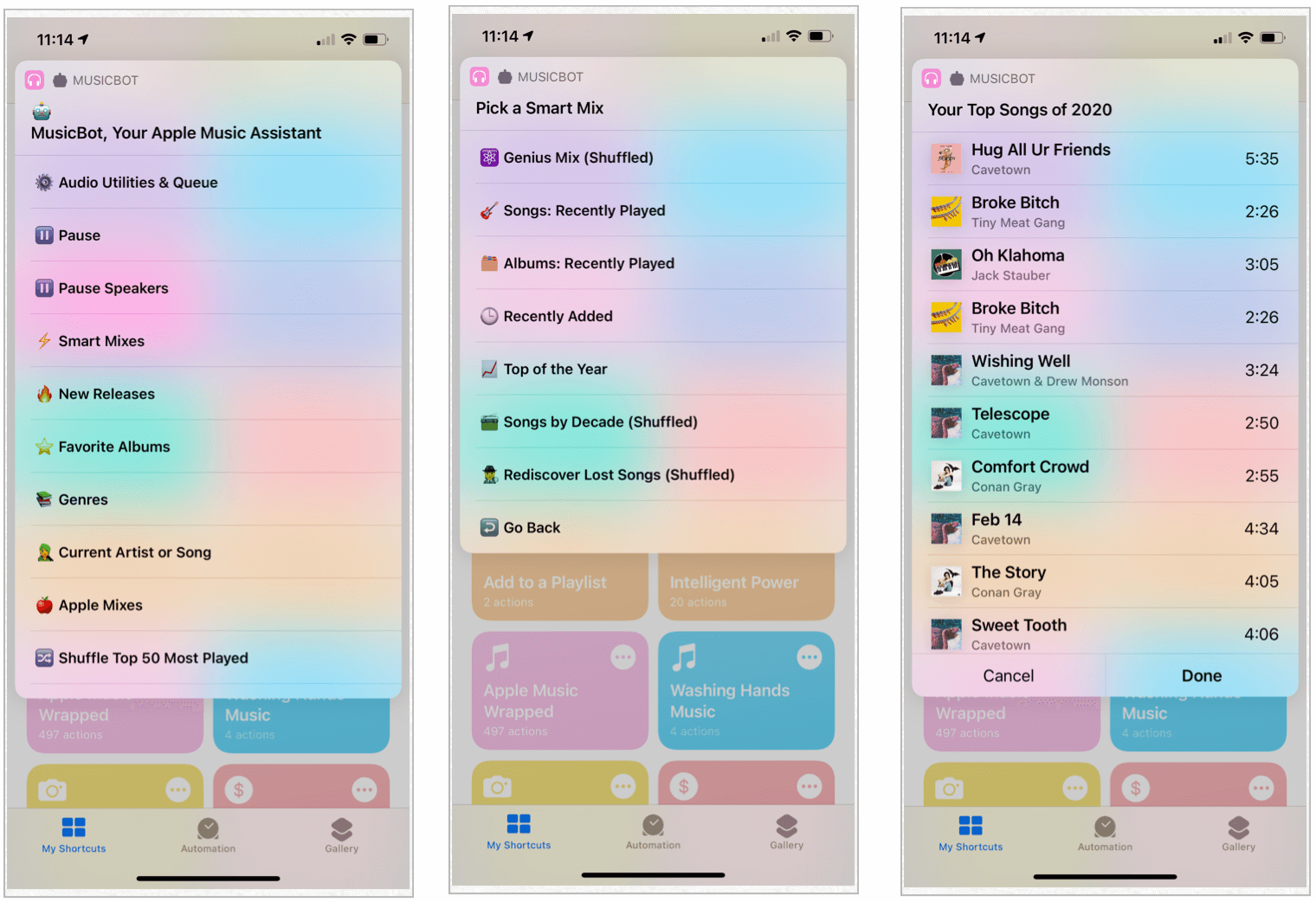 Apple Music offers 60 million songs and counting. It’s currently the largest music streaming service in the United States and second in the world after Spotify. Use any of the Shortcuts above to make your listening experience better than ever and enjoy!