Actions are the building blocks for Siri Shortcuts and take many forms. In this article, you’ll learn more about Actions and how to add them to new or existing Siri Shortcuts.

What Are Siri Shortcuts?

As previously noted, beginning with iOS 12, and extended with iOS 13 and iPadOS 13, Apple introduced the ability to use shortcuts to perform everyday tasks on iPhone and iPad. Appropriately called Siri Shortcuts, these tasks, once created, are initiated either through a tap on the screen or by using your voice.

The Siri Shortcuts app is, not surprisingly, the best place to get started with Siri Shortcuts! It’s here where you can create all-new shortcuts or grab existing ones in the Gallery.

Think of the Gallery as an App Store for shortcuts. On this screen, you’ll find a broad selection of free, recommended shortcuts and automation. Some of these are based on your digital history, while others come from installed apps. The Gallery is also where you find new and featured shortcuts recommended for all iOS and iPadOS users.

For example, let’s take a look at the section in the Gallery called Wonderful Widget Shortcuts. In this section, you’ll find shortcuts such as Open App on Apple TV, Browse Top News, Play Entire Current Album, and more. With the first one, you can wake up your Apple TV and open an app of your choosing. 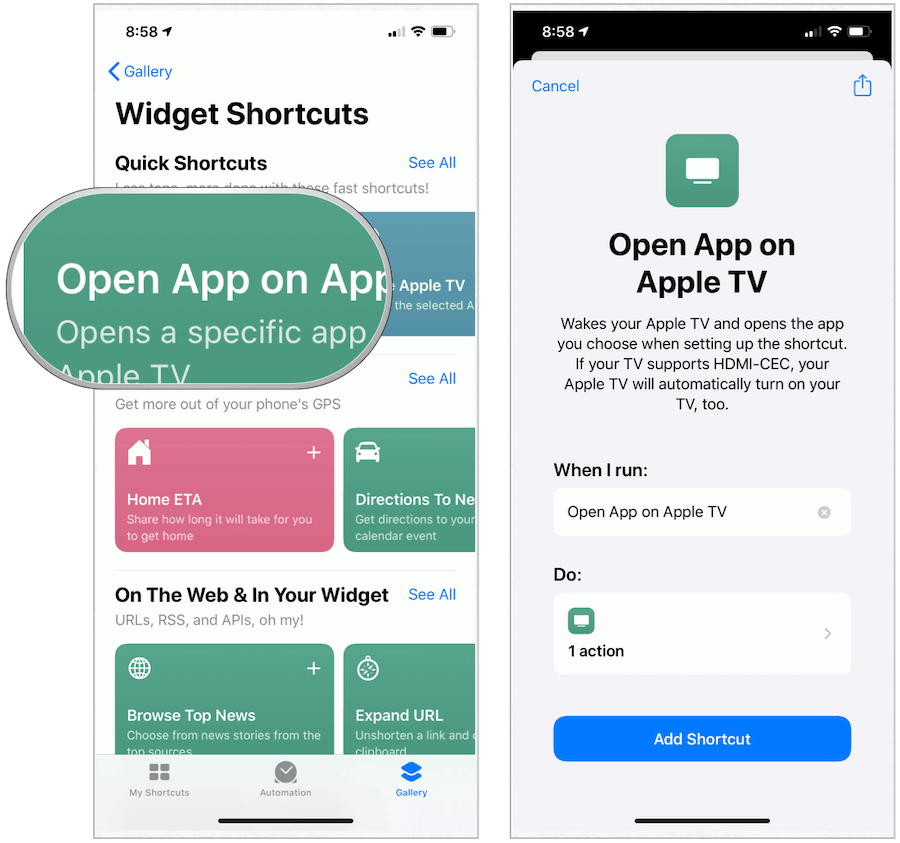 How about a Siri Shortcuts Action?

Actions are single steps in a task. You can mix and match actions to create shortcuts that interact with the apps and content on your iOS or iPadOS device. Actions can also interact with content and services on the web.

To create a new, custom shortcut using the Shortcuts app for iPhone or iPad: 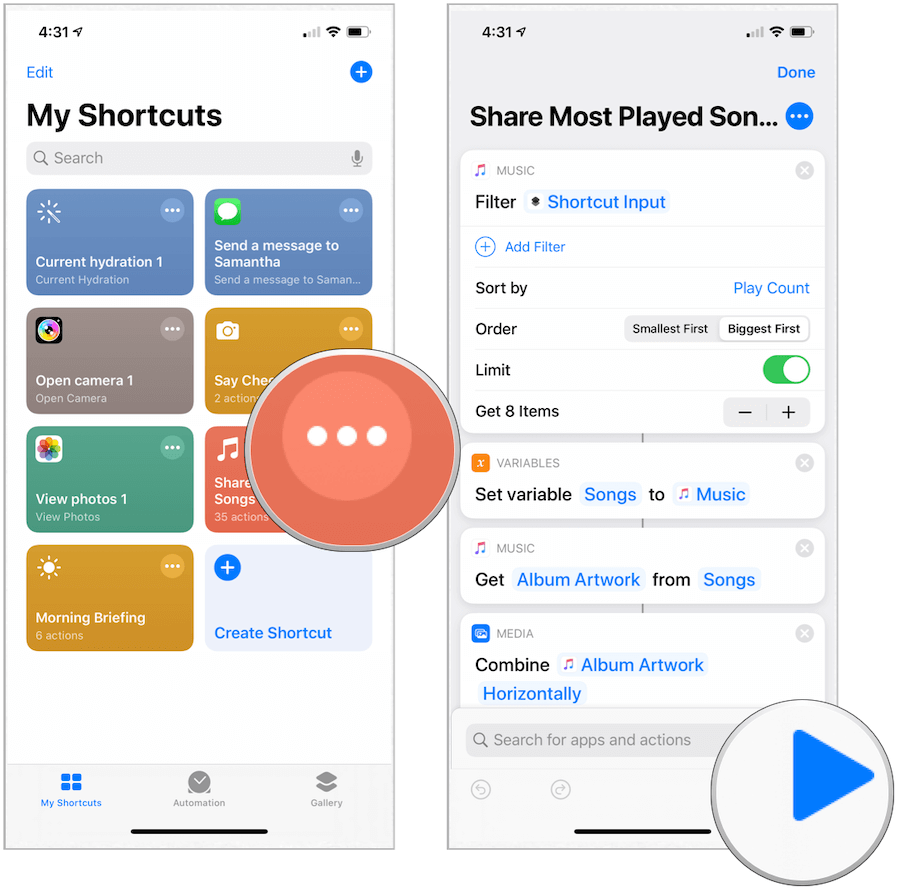 Drilling down, let’s take a look at how to navigate action lists in Siri Shortcuts. To do so, we’ll take a look at a Siri Shortcut called Dinner Time, which is available in the Gallery. The simple shortcut includes four actions and alerts your family members when dinner is ready by playing music to a device or speaker and sending them the message, “Hey! It’s time for dinner!”

Viewing Information About An Action

Editable actions are noted in blue as you can see below. In the following example, two changes have been made. First, the playback destination went from iPhone to Bedroom Apple TV. Second, a new contact email has been added. 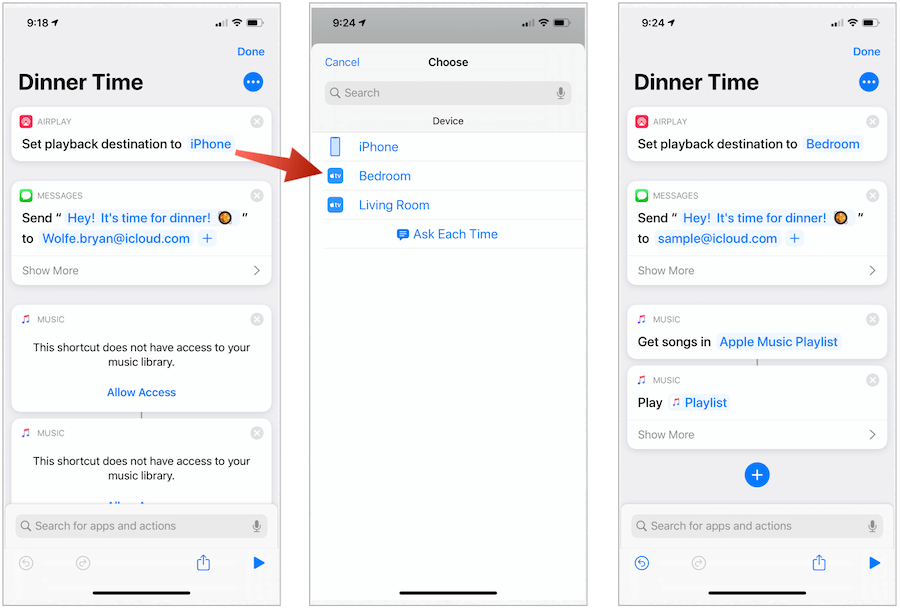 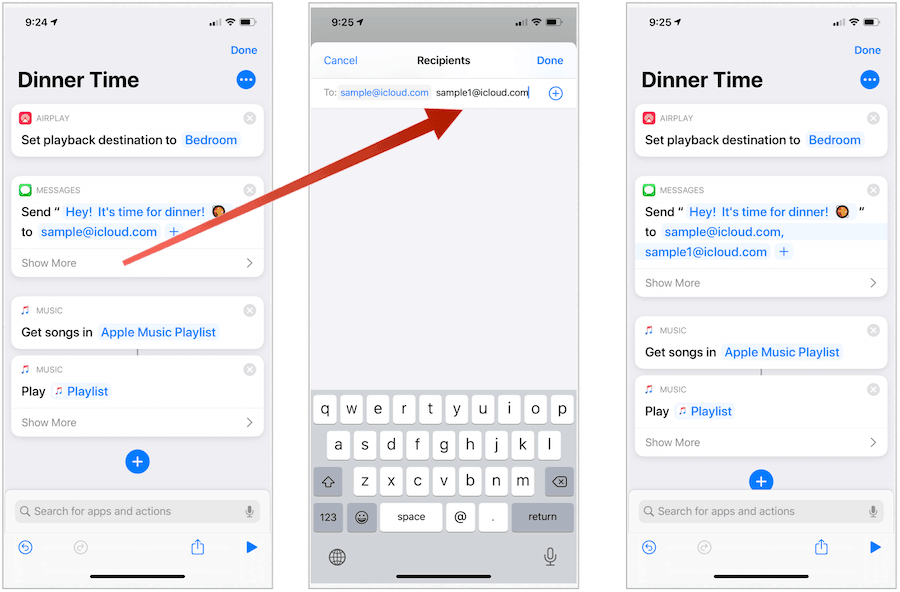 You can add further Actions to Siri Shortcuts at any time. You can find these by tapping the search box at the bottom (iPhone) or left side (iPad) of the app screen. These are organized by various categories. You’ll also see a list of suggested Actions. 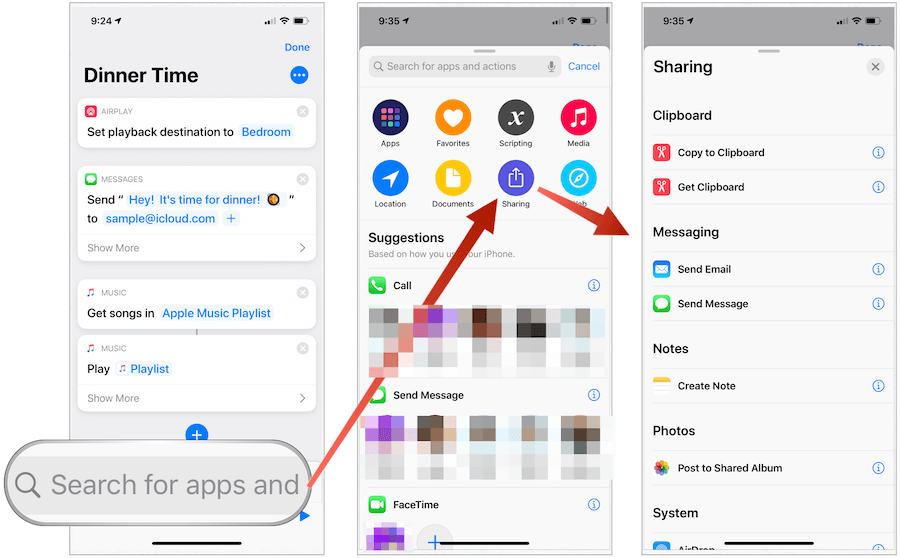 Actions are available in various categories. These include Apps, Favorites, Scripting, Media, Location, Documents, Sharing, and Web. To add an action to your existing Siri Shortcut, simply click on it. 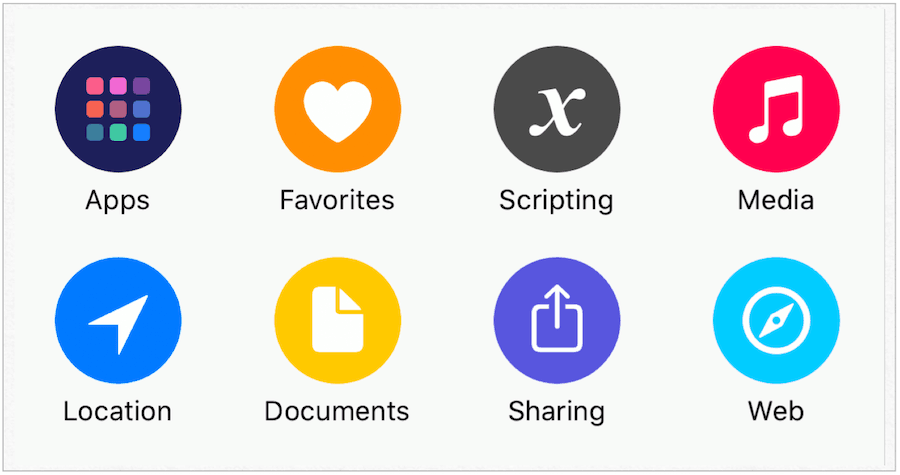 Apps: Developers can include Actions in apps. When they do, they show up in the Siri Shortcuts app. Native apps also include Actions. In the following example, an Action from the third-party Carrot Weather app has been added to the Dinner Time shortcut. 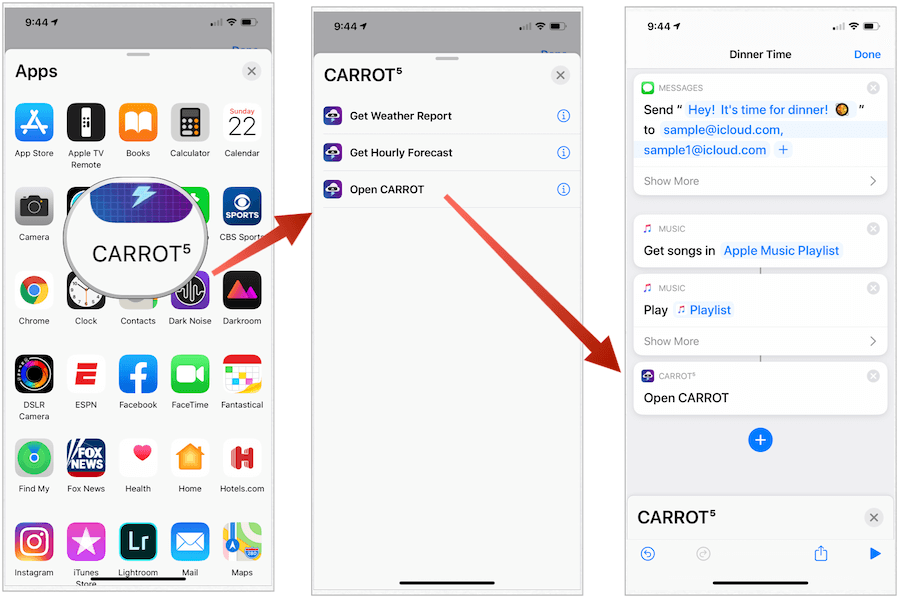 Favorites: You can designate an Action as a favorite by clicking on the information icon next to it. Favorites are listed in this location. 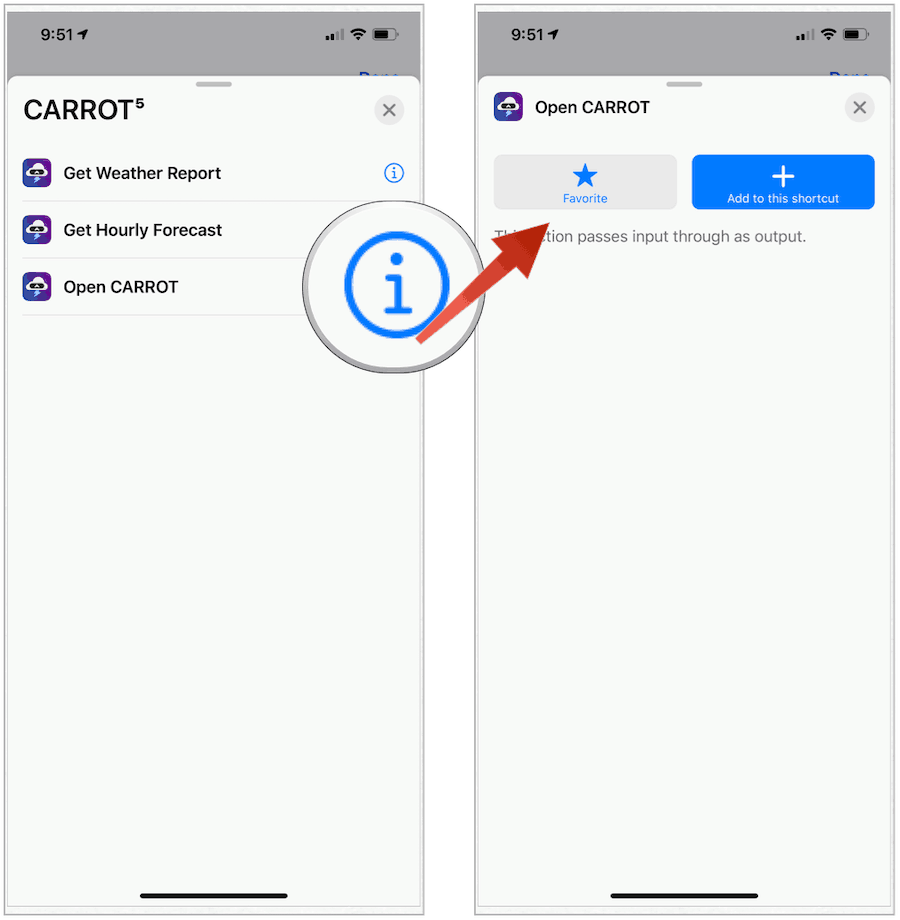 Scripting: Under this location, you’ll find a hodge-podge of Actions that take various forms, including control flow, device, notification, numbers, and more.

Media: Under this location, you’ll find actions for audio, camera, GIFs, image editing, and much more. These Actions are both enjoyable and useful and can save you a lot of time, depending on the Action(s) you select.

Locations: From here, you can activate Actions based on addresses, routing, maps, weather, and more. For example, you could add an Action that shows you a direction to a location or finds your current location. Another example: Actions that generate travel time to a location or an automated search for local businesses.

Documents: These Actions are all about folders, files, notes, text, and more. You can also use Actions that print a document or make a PDF.

Sharing: Running Siri Shortcuts is always better after sharing! Use these tools to send something through email, Messages, or AirDrop, or post a message to your favorite social networks, such as Instagram, Facebook, or Twitter. Third-party apps are plentiful here.

Web: These Actions, finally, are all about articles, Safari, URLs, etc. For example, you could use an Action to automatically open a website on your iPhone, such as weather.com, during a storm. Or run a JaveScript on a website you own.

Siri Shortcuts are highly intuitive and generate suggestions based on the apps on your device. Instead of selecting a category to search for new Actions to add, you might be better off looking at the list of suggestions.

In the example below, you can see that my suggested Actions largely focus on communicating with friends and family and playing podcasts or music. There are also suggestions for sports-related and weather apps. 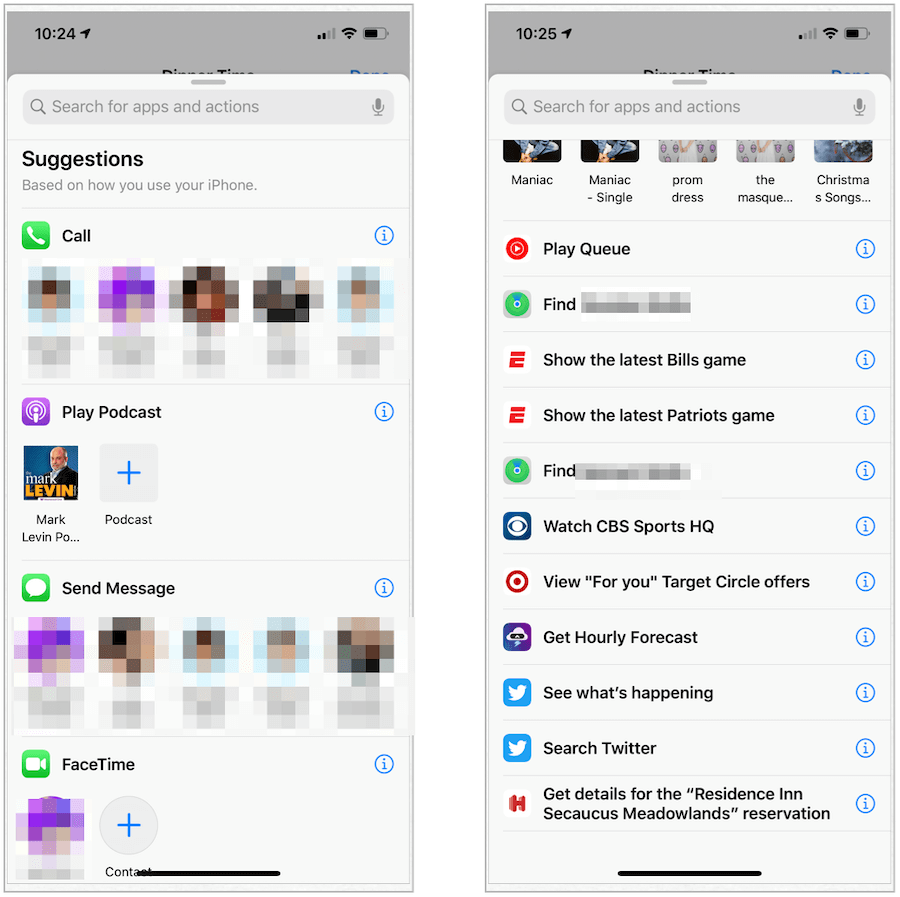 It’s All About Testing

For many, Siri Shortcuts might sound scary and difficult to use. Because of the complexity of some Siri Shortcuts, this type of concern is warranted. However, Apple has made it relatively simple to activate and use Siri Shortcuts. Better still, the Siri Shortcuts app is highly personalized, which makes it that much easier to find shortcuts that will appeal to you.

Shortcuts in the Gallery have been designed to work “out of the box.” However, as you add new Actions to your shortcuts, problems might occur. For example, you might have added an Action that’s incompatible with a certain app or process, or maybe there’s a typo. Regardless, you can discover and correct problems by running tests on each shortcut.

To test a shortcut: 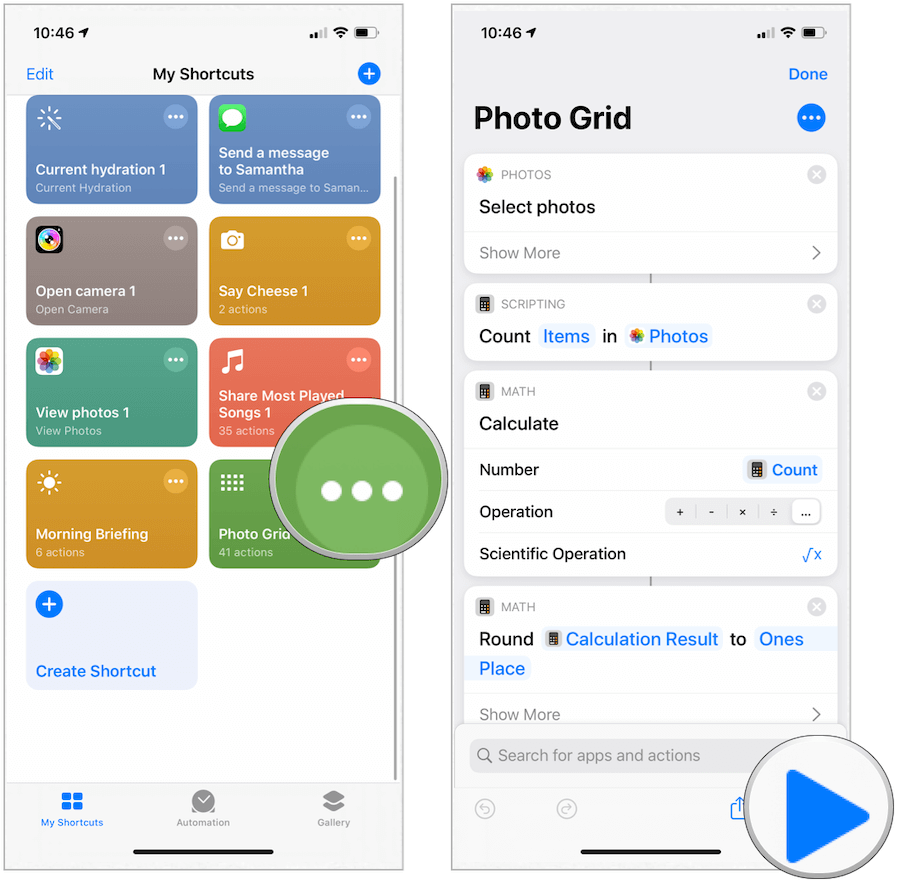 If there’s an issue with a shortcut, you’ll see an error message pop-up and recommendations to find the problem. When in doubt, you can always delete a shortcut and start again.

Siri Shortcuts aren’t going anywhere and are almost certainly set to expand in the future. When used successfully, they can make your life easier by automating tasks on your iPhone or iPad that you were already going to perform anyway.

The best advice about using Siri Shortcuts is this: Take the time and learn how to use them, even if it’s through baby steps only. Your Apple device is a powerful tool; take advantage of that power through this impressive tool.