Facebook may be the best social media platform for advertising, but advertising on Twitter shouldn’t be entirely ruled out either. Turn tweets into cash!

When it comes to online advertising, Facebook is generally considered to be the best platform. After all, every man, woman, cat, and a dog has an account there. Google is a close second for advertising, and bringing up the rear are Instagram and Twitter. Instagram is steadily eating into Google’s advantage, but that doesn’t mean advertising on Twitter should be entirely discounted. As of 2018, there are estimated to be around 335 million active users on Twitter.

Let’s take a look at how you would get started advertising on Twitter. It’s easier than you think. 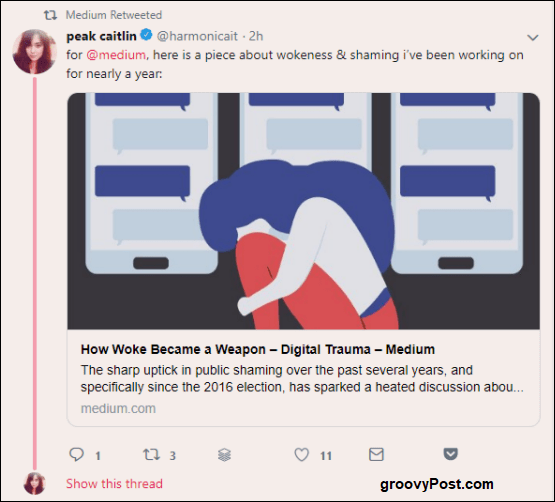 The picture in the tweet above is a card, and this will form the main part of your advert. Like all memorable advertising, it all comes down to the imagery and how to catch the eye of a prospective customer. If someone is following hundreds or thousands of people, you only have a few seconds (at most) to get their attention. Then you will disappear for good into the Twitter black hole.

So designing a captivating and converting card is an absolute must. Luckily, Twitter gives you the tools to make one.

First, go to Twitter’s Ads Manager, and at the top, you will see the option “Creatives.” Drop that menu down and choose “Cards.” 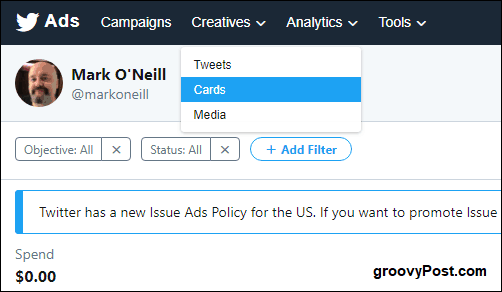 This brings you into the Cards library. There are two I made for previous campaigns, but for the article today, I will start one from scratch. So click the “Create card” blue button in the top right-hand corner. There are four options, but we will stick with the simplest today, which is the “website card.” 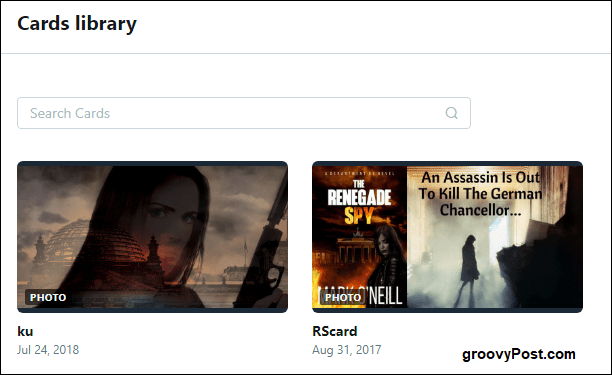 A sidebar will now shoot open on the right-hand side. It will ask you to upload your card image, a title, a URL you want to send the Twitter user to, and a card name (for your internal use only). Twitter gives exact specifications about the size of the image, the image types accepted, and the number of characters allowed in the headline.

Be sure to double-check you’re complying with all of that. But you can preview your work-in-progress at any time and make changes accordingly.

So here is a rough thing I just threw together for a curated email newsletter I have just started. 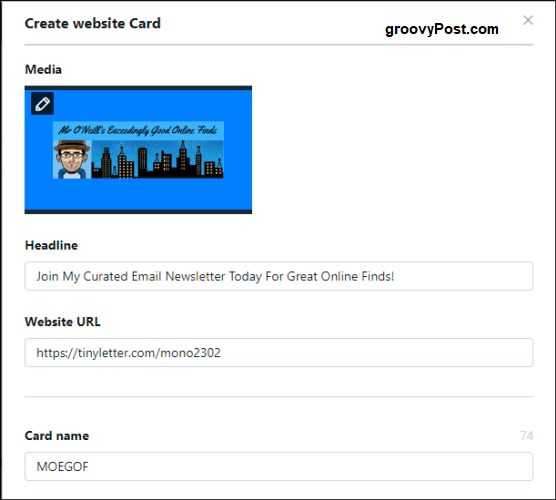 The preview button shows that I am way off with the title. As you can see, you can see what it will look like on iOS, Android, and Desktop. Considering a lot of internet browsing is now moving to mobile devices, you must make sure everything looks perfect in the mobile view. So we need to shorten that title. 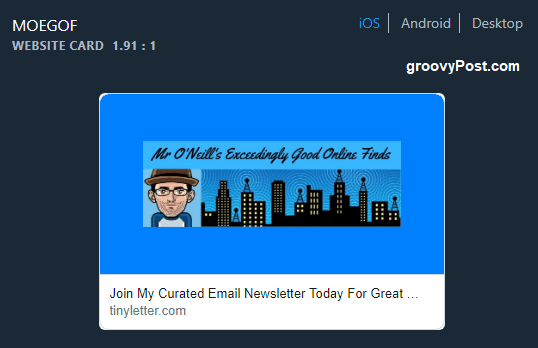 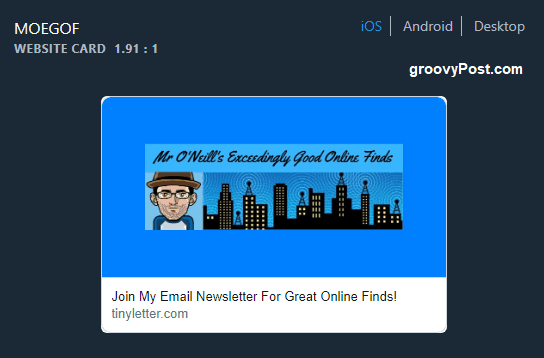 When you are happy with the card, click “Create” at the bottom. The card will now be saved to your Cards library. 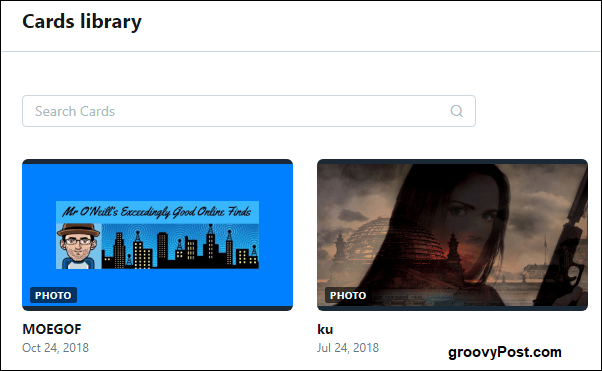 Tweeting Out The Card

I know a lot of people who merely use the Ads Manager for card-making tools and not for actual ad campaigns. If you mouse over the newly created card, it gives you a “tweet” option. Choosing that, a new tweet window opens with the card pre-populated. Add your message in the tweet box, and off it goes, free of charge as a normal tweet. 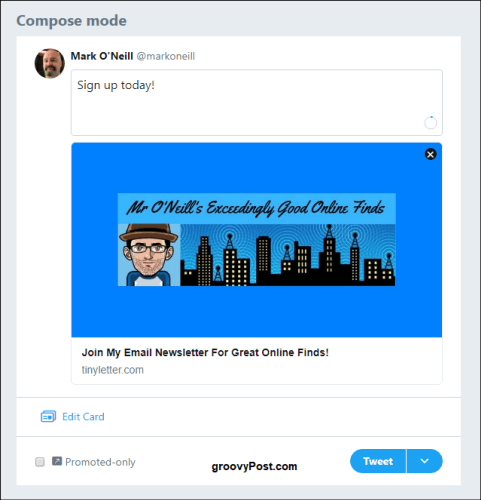 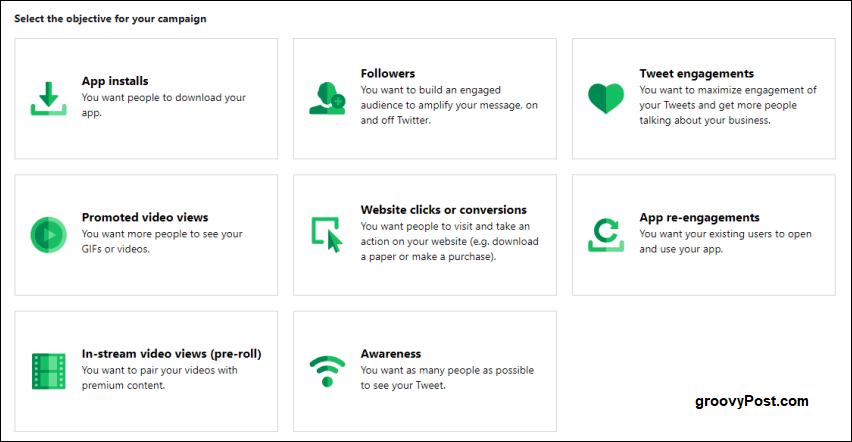 If, on the other hand, you want higher visibility on Twitter, you need to go the paid route with your ad. People I have spoken to about Twitter advertising have reported mixed results. Some have declared it a huge success while others have grouched about the total waste of money. I guess it all comes down to your ad design and what you’re promoting. As with Facebook advertising, you can set a daily spending limit, so you don’t end up with horrendous bills.

However, this is an area that I am still exploring in-depth, plus the actual process of setting up a paid ad is rather long and laborious. So I am not in a position to advise you on what is best and what isn’t. So I will save this for part two in the future.

For the moment, practice making Twitter cards and tweet them out for free. You will soon see more engagement as everybody likes eye-catching visual candy.