Buy a new car these days, and you’ll find an array of ports and audio/video interfaces at your disposal. Here are four groovy uses for them that you may not have thought of.

My family is growing. So, this Father’s Day weekend, I bought my first new minivan. I know this isn’t the kind of topic our readers expect from a “check out my groovy new gadgets” post. I admit when I first became a motorist about 13 years ago, I couldn’t imagine a vehicle more uncool than a minivan (the Segway hadn’t hit the market yet.) But now that I actually am a minivan owner, I have to say that there’s some cool stuff inside. 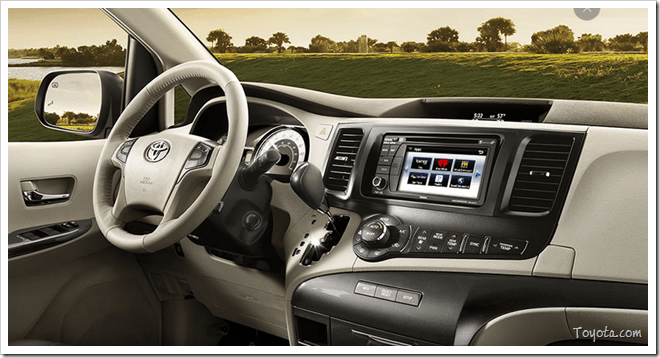 This is the first time I’ve purchased a new vehicle, and I was pleasantly surprised to see quite an array of ports, plugs, and interfaces for various gadgets. Of course, this means plugging in your smartphone to listen to your music or make hands-free calls for most people. But after a bit of tinkering, I found four additional groovy uses for the 16.4-inch color display, RCA jacks, two 120V AC power outlets, DVD player, USB port, and wireless headphones that come with my new Toyota Sienna’s Dual-View Entertainment Center.

It turns out you can plug more than just your phone into your car. Here are a few gadgets you should try:

A USB Drive Full of MP3s 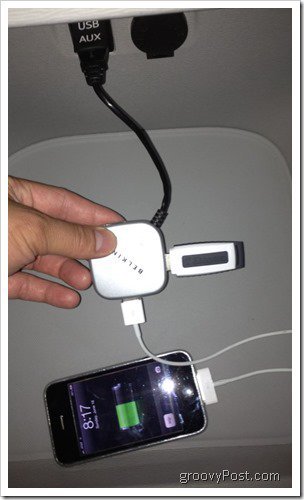 Almost all new cars today will come with a USB port “for your iPhone,” say all the ads. But, of course, what they really want you to do is sign up for their paid subscription-based “car apps” service, which lets you use things like Pandora and OpenTable from your dashboard (instead of just using your phone.) Toyota’s version of that is called Entune. Honda has HondaLink and Ford has Ford Sync. But what the ads don’t usually tell you is that you can use that same USB port to plug in any mass USB storage device and play your MP3s right off of that. Just load it up with properly tagged music files and plug it in.

The functionality of using a flash drive for music in your car isn’t much different from using a smartphone. You’ll be able to browse by artist and album and view song information. But there are a few benefits to using a USB mass storage device instead of your iPhone. First, it frees you up from having to tether your phone to your car – or worse – eat up your battery sending audio over Bluetooth. Second, you can usually cram a lot more onto a 32 GB flash drive (which you can get for under $10) than a smartphone since you won’t be competing with apps and videos for space. Overall, it’s a much more efficient way of playing MP3 files (or M4A or WMA) through your car stereo.

When I discovered the first trick, I felt pretty smart. But then I realized that there was no USB port left to charge my phone. So, I tried something: I took an old USB hub and plugged it into the USB port on the console. Then, I plugged my phone and my USB drive into the hub. As expected, both the phone and the USB powered up. But to my surprise, the car detected both the phone and the contents of the USB storage. Although I could only play songs from the USB storage, the phone’s data connection with the Toyota Entune app still worked.

Your mileage may vary depending on the type of USB hub you are using. I used a Belkin USB 2.0 4-Port Ultra-Mini Hub that I bought over five years ago, and it works fine. The only caveat is that the phone will probably charge more slowly than if you plugged it indirectly. But for long car rides, this should be a non-issue. And as a bonus, there are additional ports to charge other devices.

My Toyota Sienna XLE has a split-screen rear entertainment system. You can play a DVD on one side and then input from another A/V source via RCA jacks. This system is consistent with a few other minivan rear entertainment systems I looked at as well—one DVD player and another auxiliary video input using the red, yellow, and white RCA plugs. The intention is for you to plug in another portable DVD player or a video game system, like an Xbox or a PlayStation. But the reality of the situation is that modern console gaming systems are pretty power-hungry. Even the 120V outlet on a minivan may not be a good enough power supply for a console due to lack of wattage. Overloading the outlet may cause damage, overheating, and personal injury. Consider yourself warned. Plus, there’s the obvious issue of bumps in the road causing problems with your discs (built-in CD and DVD players are usually designed for minor shocks—but an Xbox, Wii, or PlayStation were never meant to be played in motion.) 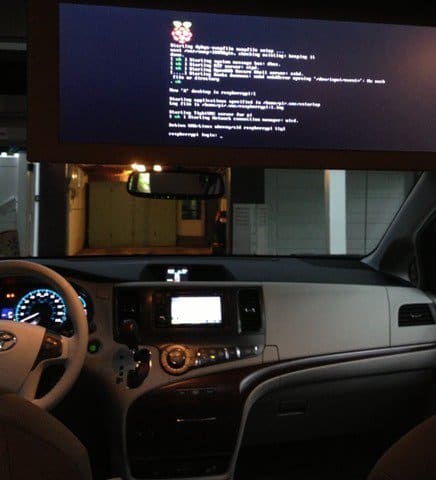 But when I saw those RCA inputs, it made me think of one thing: the RCA video out on my Raspberry Pi. The Raspberry Pi, a credit card-sized $25 ARM-based Linux computer, takes as much power to run as your cell phone does to charge. And because it runs off an SD card, there are no moving parts. So I plugged mine in, and it fired up on the split-screen just fine. Of course, to get audio, you’d need to use a 3.5 mm mini stereo plug to RCA cable. But after that, all you need is a USB gamepad and RetroPie, and you can play your favorite NES, SNES, and other retro console games. 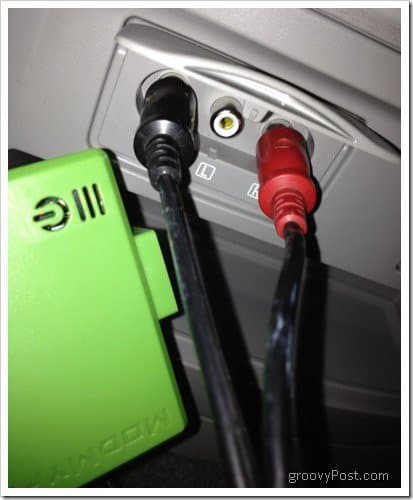 Of course, you can also use your Pi to play videos, music, and other multimedia you have preloaded onto an SD card or USB drive. Try Raspbmc for that one. 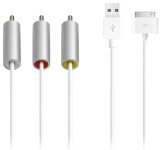 Don’t want to go through all the DIY hackery of a Raspberry Pi? Your iPad or iPhone can also play audio and video to the RCA input on a rear entertainment system. You’ll need the Apple Composite AV Cable, which will set you back around $39.

If you have a spare iPad or iPhone, this is a good way to play videos back for the kids, especially if you don’t have them on DVD.

The big caveat: starting with iPhone 5 and the 4th generation iPad (including the iPad Mini), the composite AV cable no longer works. That’s because the TV out adapter now goes to HDMI instead of composite plugs. Certain iPod touch models work but check the compatibility listing on the Apple product page before buying.

I’ve owned this minivan for all of two days, and I still haven’t taken it on a road trip with kids old enough to appreciate the multimedia overload yet. But I see lots of geeky potentials here, not just for minivans but also for all cars with USB connectivity, AC outlets, Bluetooth, etc.

Got a groovy car gadget tip? Please share it in the comments.