Liquid Crystal Display (LCD) panel technology typically falls into three categories: IPS, TN, and VA. Each of the different LCD types varies by feature set and target audience. Here’s a brief look at each and who should use them. The oldest of the LCD panel technologies, TN stands for twisted nematic. In TN displays, the liquid crystal molecules get controlled by voltage, changing their alignment. When there is no voltage, the molecules get twisted 90 degrees, allowing lighting to get through. With voltage, the crystals become untwisted, thereby blocking light.

When you’re looking for an inexpensive display solution, go with TN liquid display crystal technology. These require inexpensive manufacturing requirements, making them an affordable choice for consumers. Another advantage is TN displays can operate with low voltages, including batteries. You’ll also find an impressive refresh rate and response time.

TN displays have many advantages to consider, including offering a poor viewing angle and often inferior color reproduction. The quality of TN displays also varies by manufacturer, with some better than others.

Who Should Use TN Panels: Because of the high refresh rates, TN panels are well suited for gamers, especially those using multiplayer games.

The biggest drawback to VA display technology is its high latency, which can cause motion blur and ghosting. Additionally, colors on a VA display can fluctuate wildly depending on the brightness level, which many will find unacceptable.

Who Should Use VA Panels: If you’re looking to save money but want to use a technology newer than TN, choose a VA display. 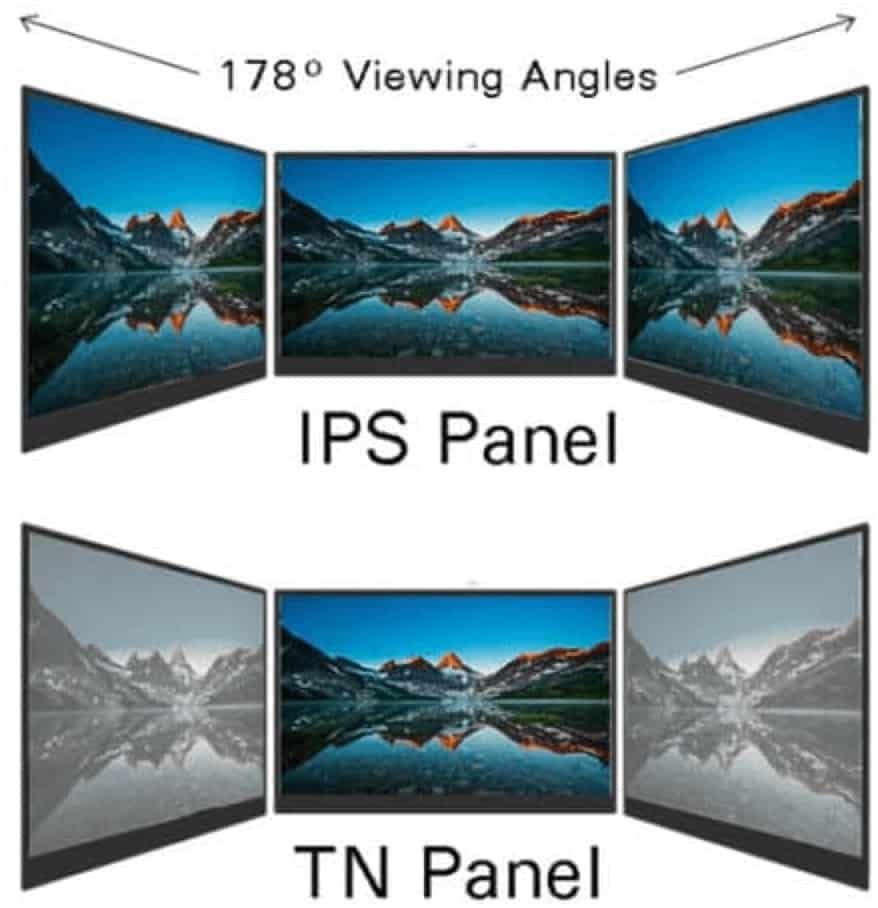 Short for “in-plane switching,” IPS displays use liquid crystals arranged in rows between two glass surfaces to produce rich colors. In addition, the liquid crystal’s ability to shift horizontally allows for impressive viewing angles where the colors don’t change. Because of this, IPS displays are suited for those seeking color accuracy and consistency with super-wide viewing angles.

Besides offering consistent, accurate colors from various view angles, IPS display technology is for eliminating the tailing when touched that’s associated with twisted nematic (TN) LCDs. The advantage is why touch-screen devices, including smartphones and tablets, have switched mainly to IPS panels. These panel types also offer clean images and stable response times.

On the reverse are a few disadvantages to consider. IPS display technology is ultimately more expensive to produce than TN and vertical alignment (VA) panels. It also requires more power. Response time is also ever-so-slightly longer than TN panels. However, on this point, there has been much improvement — especially those who value image quality over response time.

Additionally, IPS panels are sometimes subject to backlight bleeding, including light leaking around the edges or corners. Luckily, the defect is fixable in some cases. Additionally, watch the price. IPS displays are more expensive than both TN and VA display panels.

Who Should Use IPS Panels: Of the different LCD types, creatives love IPS displays, especially those in the arts and who deal with graphics because of the excellent image quality associated with the technology. Business folks will also enjoy using these types of monitors. Although IPS displays for gamers now exist, those folks are still probably best served with TN displays. For general usage, you might want to consider VA display monitors, which are the least expensive on the market.

The folks over at DisplayNinja said it best when comparing the different LCD types.

For TN displays, it explains: “All in all, if you’re a competitive gamer and don’t care much about image quality, TN monitors offer the most responsive gaming experience at lower prices than the competing fast IPS models.”

Further, “For color-critical work, we highly recommend IPS monitors. When it comes to VA vs. IPS, there’s no obvious ‘better’ or ‘wrong’ option here. Some users prefer the higher contrast of VA panels, others would rather have more consistent colors, so it’s up to what you prefer.”

In other words, the choice is yours.