Chromebooks aren’t just for kids or your parents, but are versatile an inexpensive laptops that do most of what you need. Here are the benefits to consider.

As a technology expert, I get lots of trash talk about my preferred mobile computer, a Chromebook. If you approach it correctly, this device is not a toy but a versatile tool.

That was the primary attraction of getting a Chromebook. Many of them are less than $200 when you buy them refurbished. I got mine on a special deal when Microsoft’s support for XP ended. With a cheap computer like this, I take it much more places. I’m not worried about leaving it in the car, bringing it to the gym, or taking it to a bar. If it gets damaged, I’m not out a ton of money. I think it’s the perfect laptop for kids for just this reason

It Keeps Me Focused

Unlike my laptops running macOS or Windows, the Chromebook doesn’t let me easily multitask. I can’t write, check Facebook, get Twitter notifications, and play a game simultaneously. Each of these sites could exist in a tab, but they aren’t immediately grabbing my attention with menu bar icons or invasive windows. To check Facebook, I need to switch over to Facebook. Some consider it a bug not being able to multitask, I consider it a feature. Sure I could pull out my phone and distract myself, but the Chromebook keeps me focused. 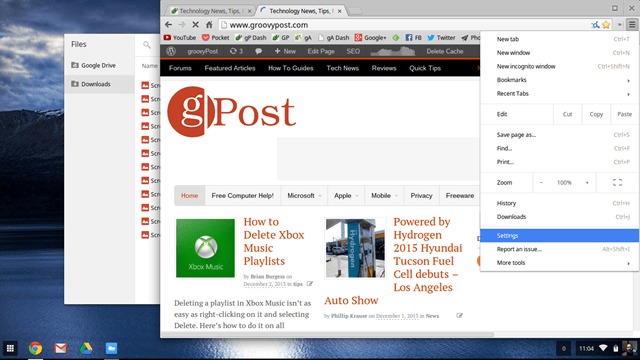 My biggest complaint is, “It’s useless if it isn’t online.” This is a myth I’m happy to dispel. Just like a Mac or PC, a Chromebook loses some functionality offline. You can’t check your email if you aren’t online. That doesn’t mean you can’t work on other stuff. The Chrome App store has hundreds of apps that work offline. Gmail and Google Docs work without an Internet connection (it syncs up when you get back online). I use Pocket to load reading materials before jumping on a plane, just in case they don’t have Wi-Fi.

It Runs Some Android Apps

Google is allowing some Android apps to run on Chrome OS. The most popular one is Evernote. If you’re adventurous, developers can use the App Runtime for Chrome (ARC) to port other apps to the Chromebook.

The Storage is Expandable

Chromebooks have a USB port and an SD card slot. That lets you move data on and off the device. If I go on a long trip, I’ll load an SD card with a few movies or music. The Chromebook supports a few different torrenting apps that download to external storage.

It Has a Crazy Long Battery Life

On average, I get about eight to ten hours of battery life from my Chromebook, which ranks up with the MacBook Air. I know a few tweaks to extend the battery life when I’m running low. This is one of the other reasons I’m able to take it more places. I never have to worry about finding a charger.

Chromebooks usually have an HDMI out port. That makes it easy to do presentations with audio and video. Most projectors have an HDMI port. If not, I carry an HDMI to VGA adapter, just in case. If you have a Chromecast, just hook it up to any TV and cast your presentations. The long battery life and small footprint let me present anywhere. I don’t have to worry about someone tripping over the power cord. Best of all, the presentations work fine offline.

Malware is Rare and Easily Removed

Since Chromebooks are based on the Chrome browser, they can get malware infections. They won’t do the damage they do on a Mac and PC. Mostly the malware is adware with annoying popups. To remove them, you can disable the extension. If the malware is invasive, you can erase and recover a Chromebook in about 15 minutes with a fast internet connection.

Overall, I think the Chromebook is an incredible value, and it’s my go-everywhere device while my old iPad and Android tablet sit on the shelf unused.