An Apple Watch is elegant in design, so to many people a protector seems repugnant. There are good reasons to get one, and here’s a look at some options.

An Apple Watch is elegant in design, so to many people, a protector seems repugnant. Who gets a protector for a watch? You wouldn’t put a protective case on expensive watches like a Rolex. However, with an Apple Sport Watch designed for active use, there are some good reasons for the added precaution of a case.

Watches trap oils and bacteria, so it’s no surprise some people are getting rashes from an Apple watch. Other people react to the metal. While the Apple Watch didn’t give me a rash — my Fitbit sure did. A watch protector can help some people with rashes. The protector shields the skin from most of the metal parts (except for the parts in the band). It also prevents the watch from moving around and causing friction with the metal. Without bordering on TMI, when I started wearing a protector, my wrist wasn’t as funky. Washing the protector was a breeze, too. 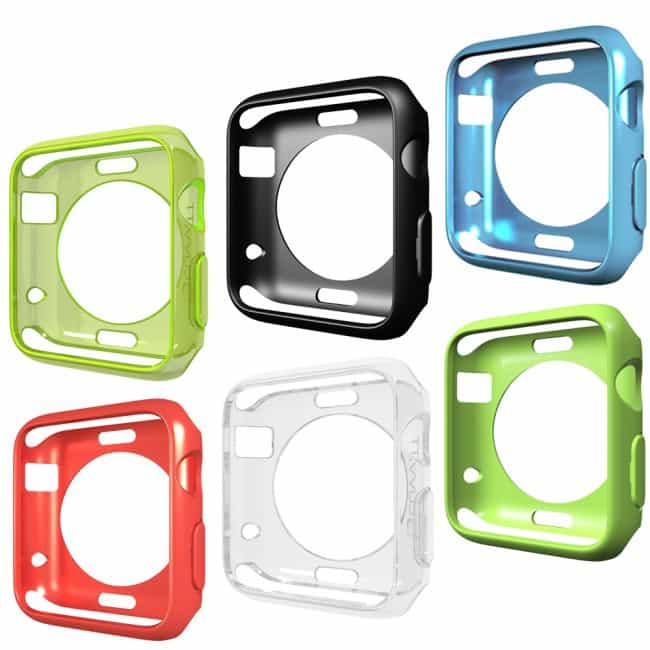 Apple limits the colors of the bands and the watch cases. For the sport, it’s just silver or black metal for the watch. You can pay $49 for a different band, but that won’t change the watch’s color. If your family has more than one watch, you don’t want to pick the wrong one. Just like an iPhone case, a protector adds a little individuality. My preferred protector turned my silver Sport Watch into a black one. I’m a big fan of black and green.

The obvious reason to get an Apple watch protector is to protect it. You can get Apple Care for $49 and then pay $69 to replace the glass. That coverage doesn’t include scratches — I tried, and it only includes breakage. I realized how my watch was getting scratched: on the treadmill. Moving my arms back and forth caused my wrist to brush the sides of the equipment. The other cause was my workout gloves rubbing against the surface. The rubberized protector created just enough of a barrier that it rubbed against those surfaces instead of the watch face.

Speaking of those gloves, they constantly hit the digital crown or side button. That was quite frustrating during working out. My protector fixed that problem, but I had to find the right one.

A slippery wrist caused the watch to move with the heart rate monitor, which affected the readings. The protector keeps the watch more in its place and prevents sliding, as mentioned under hygiene.

After a few weeks, I found the place I got the most scratches was when I’d irresponsibly put my Apple Watch on the table with the face down. The protector lifts the glass just enough off the table that I didn’t scratch it as easily. Early reports say, for some users, the back of the Apple watch is wearing off. I don’t have that problem, but I’m confident a watch protector would prevent that.

Although I didn’t test them all, I took a good survey of the field. Apple Watch cases are a moving target, so that the specifics may be quickly outdated, but cases fit into three basic categories. 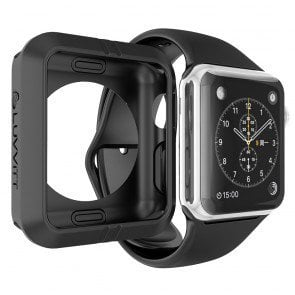 Most of these are under $10. I tried the Poetic’s Turtle Skins protector, and it was $5.95 with free Amazon Prime shipping and a three-year warranty. It completely got the job done for me. I liked the $9.99 Luvvitt Ultra Armor case slightly better because it had a digital crown protector. 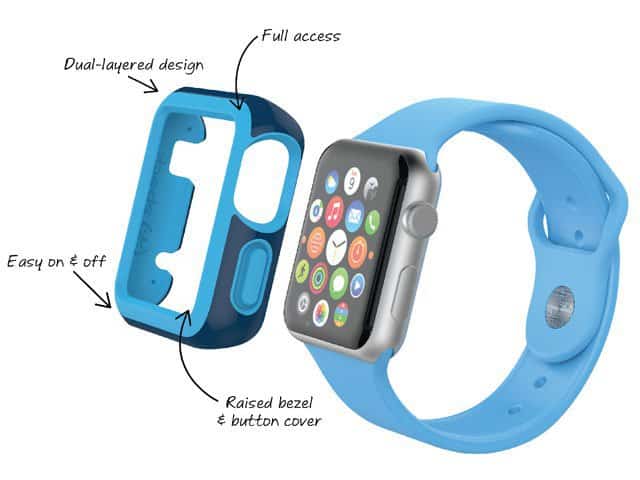 Companies like Speck make protectors that include some hard plastic along with the basic bumper material. I tried CandyShell, and it was a great protector. But I didn’t like the bulk it added to my watch.

Companies like Lunatik ($69.95) and Poetic ($24.95) sell Apple Watch bands that include an integrated case. These let you completely change the look of your Apple Watch and give it some extra protection. I didn’t try these cases because I like my green Sport Watch band. I’ll probably try one of these cases when I get bored with that green. However, they are more expensive than just a simple protector.

Some caveats to an Apple Watch Protector

Most of these plastic covers are thin and flimsy. I couldn’t test long-term, but I think they’ll break down easily with oils and sweat. I don’t expect mine to last more than a year or so. By then, my watch will probably be an antique compared to newer models.

One annoying problem I saw with all the cases is the watch didn’t always sit on my charger correctly. I’d have to position it just right on my charger; otherwise, I’d wake up in the morning with a Power Reserve greeting.

Cases aren’t for everyone, but fortunately, most cases are cheap, making it easy to try one out. If you want to keep your watch in pristine condition or you want to avoid potential skin problems, check out a few of the ones I researched.

If you use a watch protector, let us know your thoughts on how it worked (or didn’t work) in the comment section below.