There are plenty of free Office utilities out there. But in this article we’ll look at commercial licenses that still exist as both perpetual and subscription.

For home use, the Microsoft 365 suite is currently available in three varieties, including a Family, Personal, and Home & Student plan. The first is $100 per year (or $10/month) and includes Word, Excel, PowerPoint, OneNote, and Outlook for Mac, and is useful for up to six users. The Personal version is for one person and is $70/year or $6.99 per month. The student plan is a one-time purchase of $150 and includes Word, Excel, and PowerPoint.

Business users can select from Basic, Standard, and Premium plans, starting at $5 per user/month.

Perpetual Versus Subscription to Office

It is amazing to witness dramatic changes in the software industry over the past five years. With the rise of active players such as Google and Facebook, the way we compute has changed significantly. Microsoft, being the defacto standard for office productivity suites for nearly 25 years, has been challenged by the dynamics of the Cloud and how software is acquired, delivered, and used. The Office tools that Microsoft continues to charge for are free from Google, Apple, and even Microsoft, too.

I remembered 15 years ago, and our family invested in an upgrade license for Office 2000 Premium; at the time, the cost was $350. Keep in mind, this was an upgrade, not a full license, and it was only for one PC. This meant you needed to have a qualifying previous version of Office or a competitive suite such as Lotus SmartSuite or WordPerfect Office. Thankfully our IBM Aptiva had Lotus SmartSuite 9, which was used for the eligibility check. A year later, Microsoft released Office XP, for us being naïve and enamored with having the latest and greatest spent another $330 just for the Professional edition. That was near $700 spent in just one year on Microsoft Office suites. No wonder it became Microsoft’s biggest cash cow.

Fast forward to 2015, you can now pick up an Office 365 subscription for just $7 (per month), but it’s interesting how much Microsoft is making Office even more accessible by making it affordable and easy to get, whether you are running OS X, Windows or even just a web browser. If you don’t need all the whizz-bang features of the suite, you can settle for the free Office Online, which includes essential features. The focus of this article, though, is not the free version but commercial licenses that still exist as both perpetual and subscription. First of all, let’s define the two:

Perpetual – also known as a one-time purchase. Before Office 365, this is how everyone acquired a license for Office. You bought the suite from a brick-and-mortar store or an online merchant website such as amazon.com, which came in a shrink-wrapped box containing install media, a license, and a thick user manual. You inserted a disc and installed the suite and used it forever on that computer, or if the computer died or you got a new one, you transferred the license to that machine and continued using Office. You can still get Office this way, but it’s becoming the least preferred route.

Plan – With Office 365 in 2011, Microsoft introduced a subscription model for the Office suite. The company has played with the idea of a subscription for Office as far back as Office 11 but never brought it to market until now. Subscriptions work like most utilities; you pay for the service for a certain amount of time. You can purchase a Microsoft 365 on a monthly or annual basis. 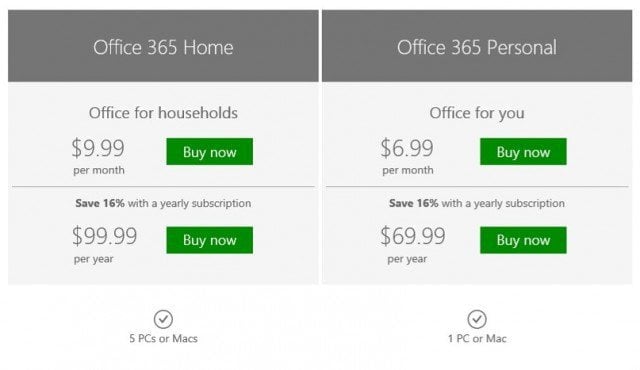 Office 365 is available in eight editions, but we will focus on the core versions available to consumers that include the following:

For the perpetual license (one-time purchase), Office is available in the following editions.

Fifteen years ago, when we purchased Office 2000 Premium for our IBM PC at home, that was the only computer we had in the house until we got a donated Zenith GT workstation. I had to lie to Microsoft Product Support to get Office 2000 activated on that second PC (product activation was not introduced into Office 2000 until Service Release 1).

My brother, who was away at college, had to depend on his old trusty Office 97 Professional license. My other sibling had to purchase Office 2000 Professional for his family PC at the time. For many families or households, this remained a reality for a long time. I should note; Microsoft introduced a Teacher and Student edition with the release of Office XP in 2002, which included rights to install on 3 PCs within the same household, but this was a complicated version requiring appropriate verification to qualify and did not grant upgrade rights to future revisions of the suite.

Today, it’s not surprising for a single person to own multiple computing devices such as a desktop, laptop, tablet, smartphone, and something in between. If you were to purchase an Office perpetual license for all those devices, it would probably be so overwhelming that it could push you to consider piracy. I am sure Microsoft does not want that, and they don’t want you using free alternatives either, which is a good enough option for many. Microsoft doesn’t want you to run older versions on your devices either. It was a standard approach for users such as myself to hand down versions of Office to another computer if we had more than one device.

This is where the value of Office 365 subscriptions comes into play. Instead of making Office more expensive and hard to choose, Microsoft makes it easy to install on multiple devices and maintain the latest version across all of them. Another significant difference is support for non-Microsoft platforms such as OS X, iOS, and Android. If you own an HP computer, MacBook, iPad, and a Samsung Galaxy Note, you could purchase an Office 365 Home subscription and have Office on all those devices. With a license to spare for just $10 per month or $100 per year versus paying $400 for a single Office Professional license and having it stuck on one PC. In contrast, a perpetual license would limit you to a PC-centric device only. We all know that’s not the reality of how we compute; it’s not surprising for households to have a mix of platforms in their home too. Managing Office 365 licensing is much easier. With Office 365, users have a portal where they can assign and revoke the license from machines installed on, which removes the chore of product reactivation. 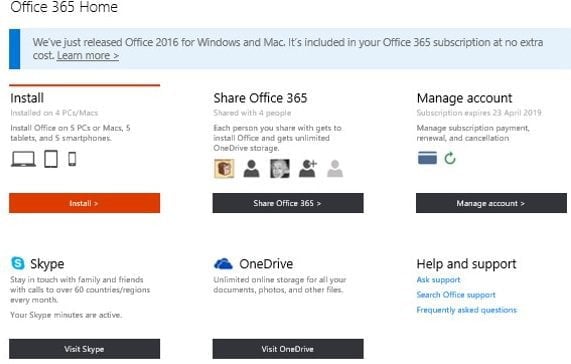 Another significant aspect of Office 365 is the cloud. Although one-time purchase Office provides access to cloud services such as OneDrive, the real value is the ability to store more. With an Office 365 subscription, every device gets up to 1 TB of storage while perpetual Office tops out at 15 GBs, which is still significantly a lot for some users. Then again, Microsoft had to throttle the service after a user abused its unlimited plan by storing up to 75 TBs of data, which would prove persons are embracing the cloud. I love using OneDrive and having access to my files anytime, anywhere, on any device. Skype is also another benefit that Microsoft adds to Office 365, giving users 60 minutes a month of free calls for each user.

Probably the greatest value Office 365 over its perpetual counterpart is that it’s a living suite. You are always up to date and are entitled to the latest versions of Office when they become available. Microsoft revises perpetual versions of Office every 18 to 24 months. Office 365 gets features the minute they are available. So a perpetual license user would have to wait two years and purchase another full license to get new features that an Office 365 user would have gotten within two years of being on a plan.

The cost is also upfront; remember I mentioned our situation when we bought Office 2000 in 2000, then ended up having to purchase the latest version of Office XP a year later. With Office 365, scenarios like that do not happen. Everybody gets the latest version and latest features. Regardless of these valuable benefits, is there any value at all of still choosing perpetual Office?

One immediate advantage is the licensing scheme (if it even matters at all). Office 365 subscriptions are licensed for Home Use only unless you move up to one of the business plans where it starts getting expensive, and you don’t even need those versions because of the features they carry. Office 2016 Professional can be used for both home and business purposes. I honestly don’t see Microsoft coming to your door to find out if you are compliant with how you use the suite. I am not saying you should ignore it, but it’s something to keep in mind. If you do end up running a small business, you probably will see the value in moving up to one of the business plans, which adds support for Microsoft’s business mail server software.

If you are a user who does not like the upgrade treadmill and likes to stick with a version much longer, then a perpetual license remains the best option. Microsoft will usually make significant changes to functions in the suite with certain versions. This can be a limitation for users who have developed an inside/out knowledge of using a suite version. Internet connectivity is also another aspect of owning and using Office 365; to get those regular updates, you need to have a decent Internet connection. For someone such as myself living in a rural area, updates can be a pain with Office 365 but not significant enough to make it a deterrent.

Those are small trade-offs, though, and it’s clearly evident, Office 365 is the future of Microsoft Office. Microsoft’s CEO Satya Nadella described Microsoft 365 as the company’s most important API. The subscription is growing each quarter, too, with more and more users opting for it; as of October 2015, there were an estimated 18 million subscribers. Overall, I think the best way to choose is based on pricing, paying $400 upfront versus $70 for a one-year subscription? You could get four years’ worth of subscription with access to new revisions and features as soon as they become available and still have change left over. It does not get any clearer than that.