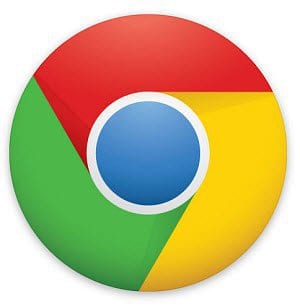 Google Spaces could be a Trojan horse that might become an alternative to what Facebook has become more of lately, a news feed aggregator.

Sometimes even the biggest companies can create stuff that makes you wonder what they were thinking. Google, in particular, is a strange case, knowing the wealth of talent working at the Googleplex. The company’s latest app for iOS, Spaces, feels like a 20% experiment that probably should not have left the labs. Spaces make an attempt to salvage whatever is left of the company’s social network endeavors. Facebook has pretty much won that race, but sometimes I feel like Google is still in denial. The company has a voracious appetite for information and Facebook keeps a lot of it under lock and key in its “Internet 2” type social platform.

Spaces could be a Trojan horse that might somehow either become an alternative to what Facebook has become more of lately, a news feed aggregator.

Google Spaces requires iOS 9.0 or later and works on iPhone, iPad and, iPod Touch. Google Spaces is a free download for iOS from the Apple iTunes Store.

Spaces is built on several platforms: Google Search, YouTube, and your Photos. You can also publish personal posts on spaces you create. The concept of the space is to organize content to specific interest. You can have a space for YouTube videos of vintage technology, your garden photos, your everyday thoughts or interest you find on the Internet using Google search. You can even mix and match content. It actually does have some attractive qualities in how it tries to build a personal social network on top of platforms we use almost use every day. 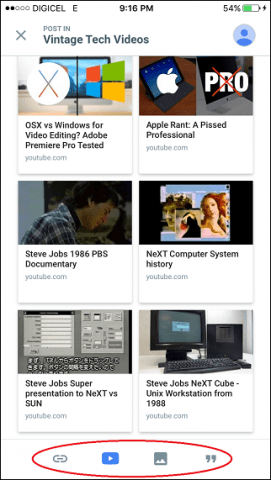 After launching Spaces, select or add an account to begin using the app. A Gmail account is required of course. 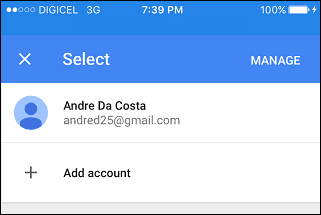 The spaces interface consists of a search bar for searching existing Spaces and a new Space tile. Click on Create a Space tile to begin. Whenever you create additional spaces, to start adding content to it, click the middle arrow button at the bottom. 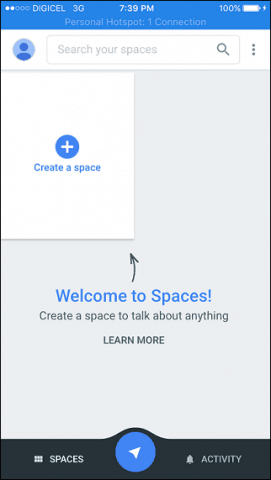 Enter a name for the space you are creating. You can edit this at any time by clicking on the edit button in each space. 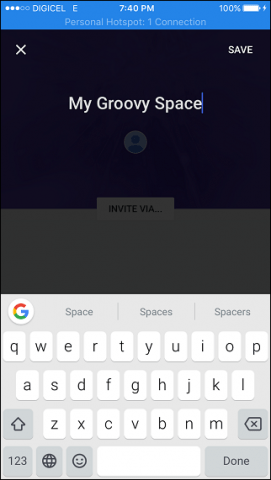 The first example of using Spaces is the Google search engine, which is built into the app. You can perform a search from within the app and even browse the content of links. If you find something of interest while browsing a site, click the blue circle at the right-hand corner to send it to the space you just created. 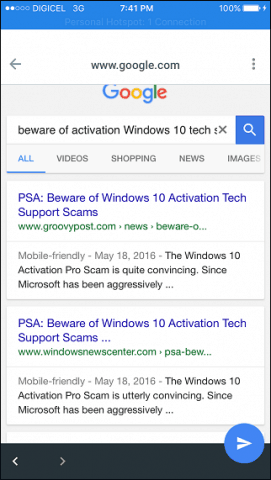 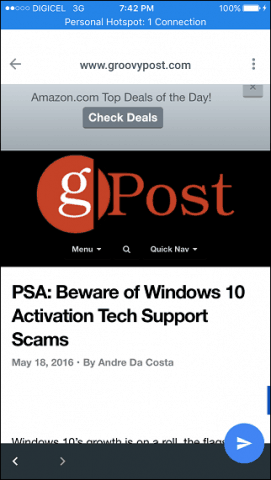 You can add commentary about the article you are about to add to your space, then click the blue button to publish. 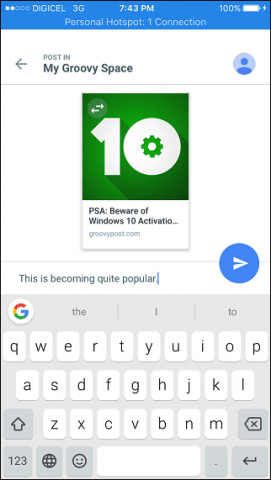 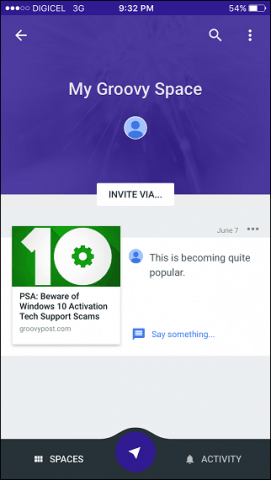 It does get quite lonely after a while, but I believe that’s an option of Spaces. It can be an aggregator just for you or others as well. Each space offers the option of inviting a friend. This is not exclusive to the Google accounts. For instance, I can use the share sheet in iOS to invite friends from popular social networks such as Facebook, Twitter or Instagram or using basic email. 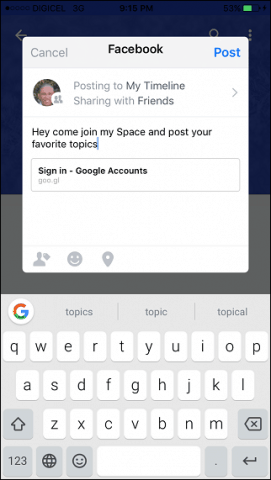 Each space can be personalized, just click the three dots at the top right-hand corner, then choose from a list of options which include: add background covers, edit the name, mute, invite members or delete the space. 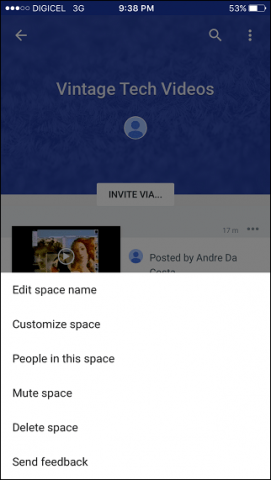 Customizing the background cover for each space is limited. I could not browse beyond a certain point in my photo library. Maybe this is just a bug Google isn’t aware of, but if you are taking a lot of screenshots, those will be your only choices of photos to use for your space cover. You can add a bit of pizzazz by modifying the background color of the cover. 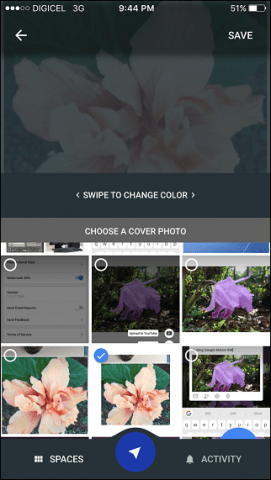 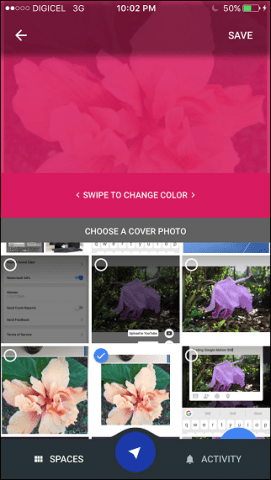 Beyond leaving it up to the user to create the type of social network they want, Spaces feels like another idea in the sea of things the company imagines each day. The social networking arena is a difficult battlefield to be in. Veterans such as Twitter are trying to stay relevant with new competitors such as SnapChat, which is extremely popular among teens. Spaces feel like it’s asking a bit too much of users. Facebook and Twitter may take the work out of building and managing a social network, and focuses on the key thing to share. The worst part is the need to invite others, I think those days have long past where you invite friends to a social network. Spaces probably would have been cool in 2008, but today, it’s asking a bit too much of the user.

Spaces feel like it’s asking a bit too much of users. Facebook and Twitter may take the work out of creating and managing a social network, and focuses on the key thing to share. The worst part is the need to invite others, I think those days have long past where you invite friends to a social network. Spaces probably would have been cool in 2008, but today, it’s asking a bit too much of the user.