Recently I found my system running a little slow and found a servicer running called WWAHost.exe. What is it? A virus or a normal Windows service? Let’s take a look.

You’ve probably landed here because you’ve found WWAHost.exe running on your computer and you’d like to know why. Fear not, it is not a virus. Microsoft intentionally put WWAHost.exe in Windows 8 as an executable necessary for certain Windows Apps. Read on for more details.

If you take a look at the description of WWAHost.exe in Task Manager you’ll see it says “Microsoft WWA Host.” If you think that’s a bit vague, you’re right! Microsoft is saying that the WWAHost process is a WWA Host… OK… that explains it right! Sarcasm aside, here’s what it does.

Windows 8 uses Javascript to execute some Metro apps, and WWAHost is the process that hosts this. Because any Metro apps are written in the same fashion as web apps, several of them need to run interchangeably within Internet Explorer. With that said, Microsoft explains WWAHost as “an Internet Explorer-based rendering platform.”

A look at WWAHost on my Windows 8 test system using Process Explorer reveals that it is currently hosting the platform that the Bing Weather app is running on. 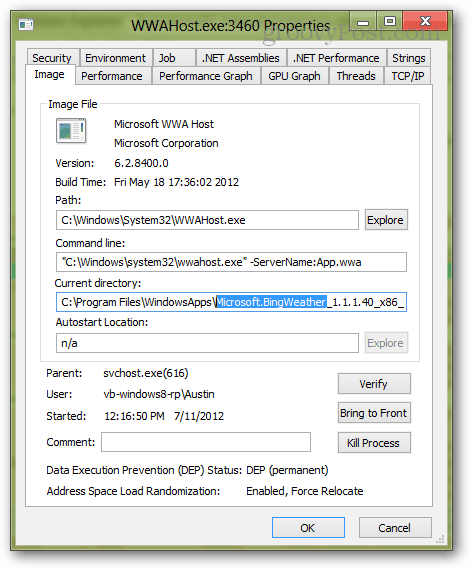