Typing without digital crutches increases your speed and makes you a better human (sort of).

A while back, everyone was complaining and/or joking about the existential iOS autocorrect bug that prevented you from typing “I.” At first, I had no idea what everyone was talking about. I hadn’t been experiencing the bug at all. But then I realized why. I disabled autocorrect about two years ago. And I don’t miss it one bit.

This is a hilarious iOS 11 bug pic.twitter.com/TXFXbvgaqO

Do I make typos? Of course, but so do you and with your autocorrect. Do I type faster? I think so when you factor in the overall words per minute.

See, there are two things that I always hated about autocorrect and autocomplete.

Typing with autocorrect is like bowling with bumpers. After a while, it’s an entirely different game. Instead of trying to bowl straight down the lane, you learn to bounce off the bumpers in expected ways. iOS learns to compensate for your sloppiness, and in turn, you adapt to typing sloppily. If your text fixes itself, why bother being more accurate?

If you think about how often you type on your phone, that means hours and hours of practice. Every single day, you’re practicing typing. If you practiced piano or unicycling that long, you’d be a world-class expert.

But most of us don’t. Primarily, we practice sloppy typing. So, we never get better. The technology gets better, so our output improves, but our typing skills don’t.

This, of course, isn’t a big deal. No one’s going to win a Nobel Peace Prize in iPhone typing.

But I think you should try it out, just for fun. Turn off autocorrect for a week and see how it goes. See what life is like when you’re responsible for fixing your own mistakes.

How to Disable Autocorrect in iOS

Go to Settings, then General, then Keyboard. Then, disable Auto-Capitalization, Auto-Correction, Predictive, and any other digital crutches you want to shed. 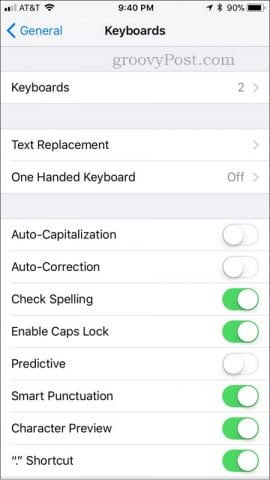 I’ll give you one tip as you embark on this challenge: take your time.

Instead of trying to type as fast as you can, try to type steadily. Type on a beat, with rhythm, like your fingers are marching along with the keyboard.

I do this, and it helps me immensely. It slows me down, so I make fewer mistakes, and it activates my muscle memory as I go. It’s like learning a song—once you become familiar with it, you’ll be able to play it at a faster tempo. This is better than blasting through the words you can type effortlessly and then stumble when you get to the hard words.

Keep it steady, accurate, and on a beat.

Let me know in the comments how you do. Or, if you’ve already turned your back on autocorrect, let me know why and how.