The OnePlus 6T is a premium flagship quality Android phone which sells at a discount versus the Apple iPhone, Google Pixel 3, or Samsung Galaxy S9.

In the market for a new quality smartphone? In addition to the usual suspects like Apple iPhone, Google Pixel, and Samsung Galaxy, you might have heard rumblings about the OnePlus 6T. It, too, is a flagship quality phone with more hardware under the hood that provides comparable performance and a premium experience. And the best part – it’s half the cost of the other guys. Here is a look at some of my first impressions of the OnePlus 6T and some of what you can expect.

Introduction to the OnePlus 6T

OnePlus is a Chinese company that focuses on phones that have the same features as higher-priced phones. It started just a few years ago when it unveiled the OnePlus One in 2014. The first phones were intended to be developer-friendly and originally shipped with the Cyanogen OS — a variant of Android. The company has since rolled out several models and now comes with OxygenOS, a customized version of Android. Its current flagship model is the OnePlus 6T which we’ll take a closer look at here.

Each phone has a 6.41” Optic AMOLED display with a resolution of 2340×1080 pixels and 402 PPI, 16+20 MP Dual Camera, and a Snapdragon 845 Qualcomm processor. The current phone is the OnePlus 6T which comes in a few different configurations, which include the following at the time of this writing:

It runs the OxygenOS based on Android Pie, the closest thing to pure “vanilla” Android compared to other phones like the Samsung Galaxy. It’s easy to set up out of the box and includes a lot of settings for customizing the look and feel of the phone.

One of the unique features of the OnePlus 6T is the in-display fingerprint reader. It’s the first phone in its class to offer this. Now that it is the first go around, it’s what you would expect from a first-generation…it doesn’t always work the best. Still, after configuring it a few times, I have had good luck with it, and you can add multiple fingers if you want. Plus, it still has the Face ID to unlock if the fingerprint doesn’t work. Or, you can always use the standard PIN if you need to.

The phone comes with a 3700mAh battery that should last you all day on a full charge with regular use. While it doesn’t support wireless charging, the included charger will quickly give it a full charge. Something else you can do to ensure you’re getting the most out of the battery is to enable dark mode on the OnePlus, as Google has confirmed dark mode helps prolong battery life on phones with OLED screens. For more, check out our article on how using dark mode on Android and your installed apps improves battery life.

It has what the company calls a “Teardrop notch” for the 16MP front-facing camera. But it’s nowhere near the size of the notch on the Pixel 3 or iPhone XR. There is also a setting you can configure to hide the notch if you’re annoyed by it. Personally, the notch doesn’t bother me much, but I do prefer to hide it. 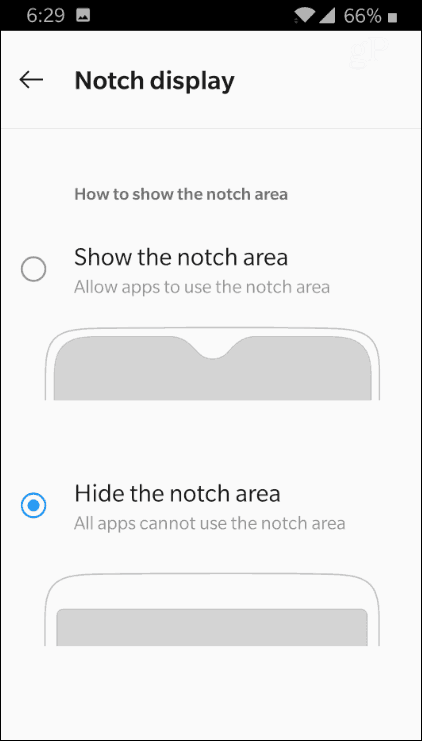 OnePlus is a company to keep an eye on. The company is manufacturing premium flagship phones at a fraction of the cost of the competition. Yet, no phone is perfect, and there are some areas where the OnePlus 6T falls short. First off, there is no headphone jack. This is the first OnePlus phone not to have one. It does come with a USB-C headphone adapter, but headphones are sold separately. If you’ve used that type of setup before, you know why a headphone jack would be preferred. It just adds an extra complication, the adapter can come loose, and you have to worry about losing the adapter.

Also, there is one external speaker that faces down that doesn’t get very loud. When you turn it up to high, there is a distorted sound with no base or crisp, clear audio. The headphones sound fine, but the external speaker leaves much to be desired. Also, when it comes to the camera, the shots are comparable to the Pixel 3, but image stabilization is not very good when doing video.

You might think the amount of RAM and storage space is a bit ridiculous for a phone. You can get a phone with 6GB of RAM and up to 10GB. The Pixel 3 comes with 3GB of RAM, and the iPhone XS has 4GB. However, the OxygenOS seems to make good use of it as I can run many apps at once, and it doesn’t stutter or skip a beat. 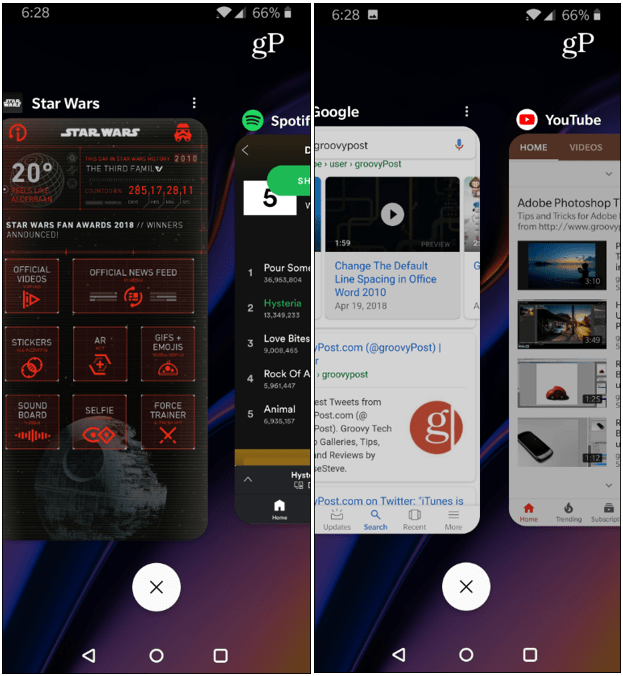 Still, if you can overlook a few minor flaws with the phone, you’re going to get a great phone with a battery that should last all day. Also, you’ll have OxygenOS, which is a clean and responsive version of Android Pie that takes advantage of the powerful hardware under the hood. The display is crisp and comparable to the more expensive flagship phones.

I’ve been using the OnePlus 6T for about a week so far and have been impressed. Of course, I will cover it in more detail in more articles in the coming weeks. Leave a comment below and let us know your thoughts on this phone or any other flagship phone you prefer.