Samsung’s Galaxy Note 10.1 tablet brings its already large Note line of phones to an even bigger from factor. And it offers more features that the smaller phones lack.

The Samsung Galaxy Note 10.1 has the hardware needed for high end Android tablets. But still, with so many more tablets currently on the market, choosing the right one involves a great amount of research deliberation, so let’s take a look at what this package from Samsung has to offer.

When it comes to buying any expensive electronic device, the first thing I’m interested in what it offers in terms of raw computing power.

Here’s what’s under the hood. 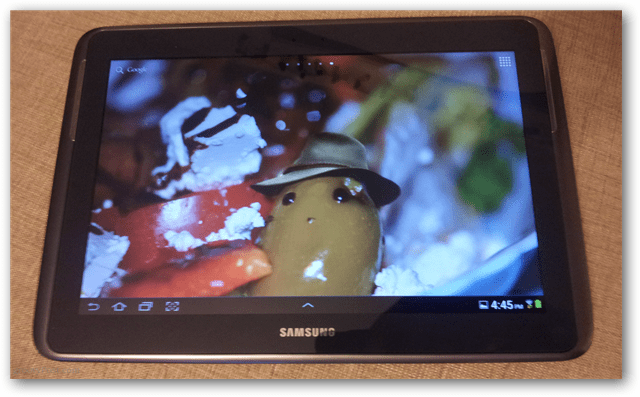 The Power and Volume buttons are located at the top of the device on the starboard side, while the S-pen has a rather uncanny bay at the bottom of the same side of the tablet. The USB port is located at the bottom-center. There are no ports on either landscape side-edge of the 10.1 Note. 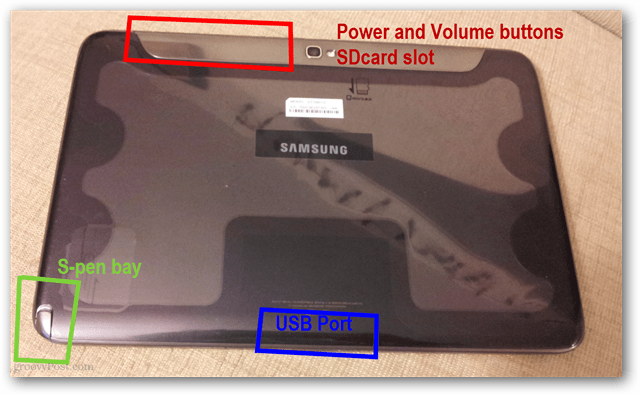 On the top rear of the tablet the 5 MP main camera makes its appearance. And while it’s on subject, the camera leaves much to be desired of. Picture taking with the Note is slow, and there seems to be a random amount of delay attached to the digital shutter lag. Photos also appear to be processed automatically be the tablet’s camera software with a slight blur and color corrective filter seemingly applied. While the tablet can take photos or videos when you’re in a pinch, it won’t work as your primary camera by any means.

Measuring at 8.9mm deep, the Note 10.1 is very thin. As you can see in the images below, it gives a standard mechanical pencil a run for it’s money. This sideview also gives you a good view of the charging port, which is Samsung proprietary, which I have a little rant reserved just below a bit.

The Micro USB slot on top is easy to access, and the volume rocker and sleep/power buttons are also conveniently placed and firm enough that accidental presses shouldn’t occur often. 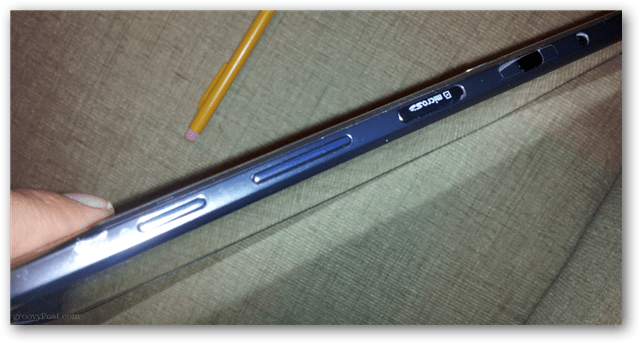 This is the charging cable. I’m not sure which bigwig thought it was a good idea to create a proprietary cable for a tablet, but this is probably the most frustrating part of the entire device. There is no micro-usb port anywhere to be found, just this clunky Apple-ish looking port that resembles a mislaid attempt to copy the previous generation iPhone 30-pin connector. If you’re looking for a reason not to buy the Note 10.1 this isn’t exactly a deal-breaker, though it’s certainly worth considering.

I’ve been using capacitive touch-screen tablets and matching styluses for a while now, and I have to say the S-Pen included in the Note 10.1 was impressively accurate. Writing with it feels natural, similar to writing with a pen and paper. This isn’t because of the S-Pen alone, but because this tablet has under the hood a Wacom digitizer that precisely tracks movements of the stylus. On the pen there’s also a button that for me appeared to capture screenshots.

One feature I liked about the S-Pen is that is has a built-in sensor that detects when it’s pulled from its bay and automatically launches an action-menu (if you aren’t busy in another app). This menu presents you with seven tasks specifically optimized for the S-pen. While that isn’t necessarily a lot, there’s dozens of apps available that are designed to work with the pen and digitizers coming to future Android devices.

Onto the software side of the device, the Note 10.1 has a groovy Multiscreen function that allows you to use two apps at once in a split-screen position. This doesn’t work the same way it does in Windows as there isn’t much customization to be had. Each app open in Multiscreen mode is assigned exactly 50% of screen real estate. You can switch which side an app uses, but other than that they are stuck in place. 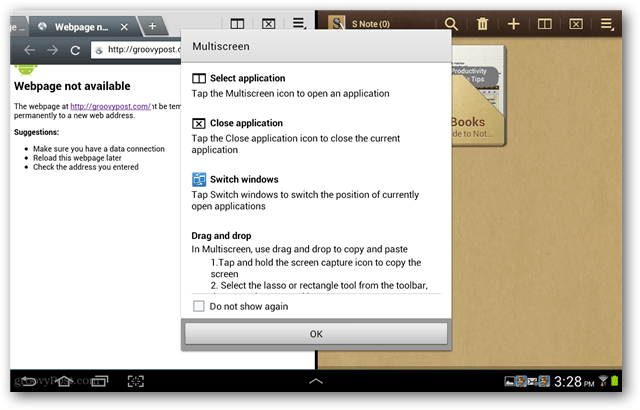 The Multiscreen mode only worked with six of the built-in apps. More are on the way or already available, but not many. I felt this Multiscreen feature was one of Samsung’s top selling points, but it left me disappointed that apps had to be specifically optimized in order to function with it. That means many will never be used in multiscreen mode, at least not in the Note 10.1 or in this year’s lineup of Android. 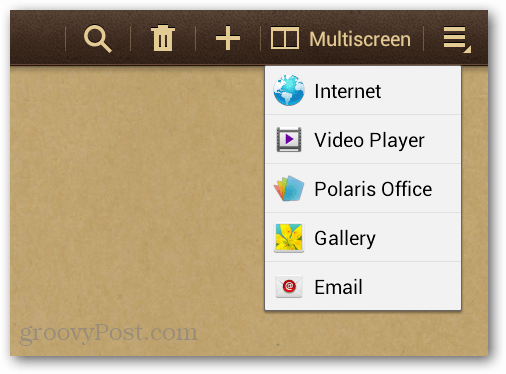 Aside from the built-in pen settings and 21 baked-in paidware apps, the overall Android interface was left only lightly touched by Samsung’s TouchWiz skin that it recklessly applies to many of its other Android victims. This leaves us with a close-to-stock Android experience – not quite what you would see from a Nexus, but better than previous Android releases from Samsung. 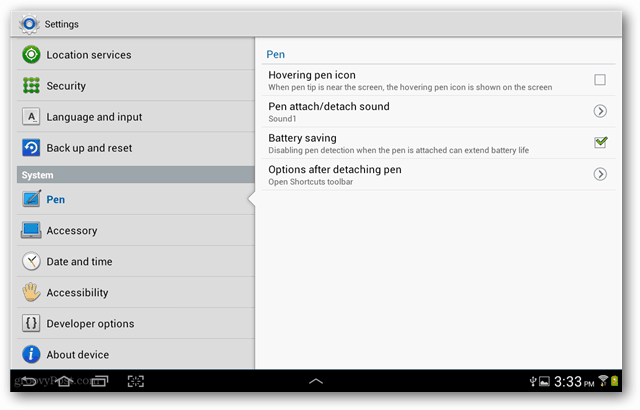 While I’m not a fan of TouchWiz overall, Samsung does include a rather nice Task Manager as part of the TouchWiz skin. It allows you to force kill apps, manage downloaded apps, and manually clear out RAM. 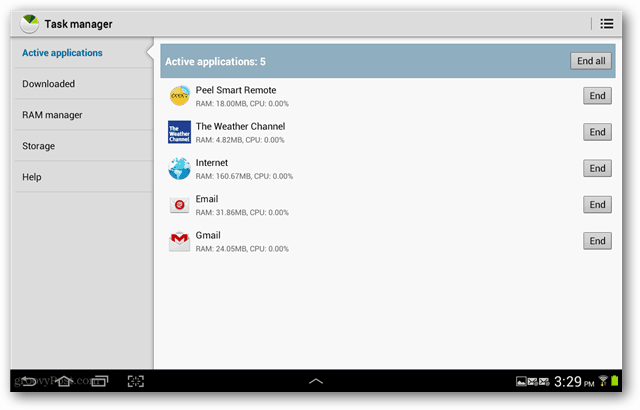 With a few tests of opening up 20+ apps and then running 720p video playback, I didn’t encounter any lag or stuttering. It appeared that Android and the quad-core Eynos processor were able to handle the multiprocessing load, but the 2GB of RAM certainly played its part after taking a look at the maxed RAM tab in the Task Manager. I ran a few games through the device as well, including Minecraft: Pocket Edition and experienced nothing but smooth performance. Battery life while video streaming seemed to be at about seven hours, and simple web browsing brought it up to 11 hours.

Starting at $449 (16GB model from Amazon) the Samsung Galaxy Note 10.1 isn’t the cheapest, nor necessarily the fastest tablet on the market. However between its S-Pen, sturdy specs, solid build design, and array of utility features it is impressive. If you can get past the annoyingly short proprietary charging cable, the Note 10.1 is an appealing tablet that offers the only enjoyable digitizer pen experience presently on the market.