For $3/month, you can protect your privacy from marketers, hackers, and other snoopers. Let’s discuss why a VPN is totally worth it and who we recommend.

Occasionally, there are moments when niche tech topics spill over into public awareness. For me, that usually comes with a feeling of excitement and vindication, like when the Serial podcast exploded, and everyone was like, “Oh, you can have stories play in your head no matter what you are doing…” and I was like “Yes! This is the ‘podcast’ thing I kept pushing on you ten years ago!”

Next up on the horizon in terms of tech-trending-to-the-mainstream: VPNs. A virtual private network, or VPN, is basically a proxy that prevents others from tracking which sites and services you access on the internet. And the reason we are talking about VPNs right now is because of a Congressional Review Act (CRA) resolution signed in April 2017 that rolled back a privacy rule created by the FCC last year. The FCC rule was supposed to regulate the ability of ISPs to collect your internet browsing data and sell it for marketing purposes.

The rollback of that FCC rule is controversial, of course. But what I think really struck a nerve with the public is this realization:

“What? My ISP can see and record what I’m looking at on the internet?”

Yes. They totally can. And this has been true since the dawn of the internet.

The technical aspect of this shouldn’t be a huge shocker. It’s not much different than your phone company knowing what phone numbers you are dialing. They kind of need to have that information in order to provide you service. But the thought of an ISP actually tracking and analyzing your internet activity probably never crossed your mind.

So, whether you are for or against the regulations barring ISPs from collecting your data for profit, the fact stands: ISPs can and do watch where you go on the internet.

That is unless you use a VPN.

What is a VPN and What Does It Do?

A VPN is an effective and legal way to obfuscate your internet activity.

Without a VPN, your ISP would essentially have a log of all the servers or websites you access. They know which websites you visit and how long you spent visiting them. They can see that you were on Netflix or Hulu or that you visit the FarmersOnly.com dating site every day on your lunch break or ShadyOffBrandDrugStore.com when your kids are sleeping. 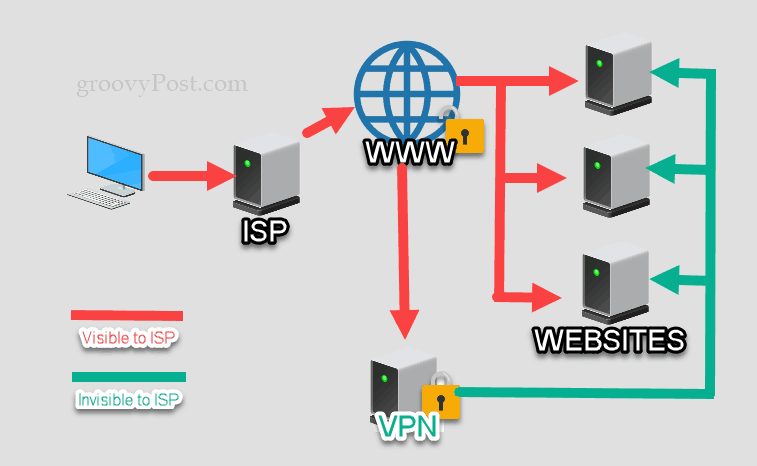 With a VPN however, all your ISP would see is you accessing that one VPN service. After that, they have no way of knowing where you went. The VPN serves as a proxy between you, your ISP, and the internet. The traffic that gets passed between you and your VPN service is encrypted, so only you can see what’s in it. And if you choose a quality VPN provider, they don’t keep any logs of your connection or web traffic history.

This is called an encrypted tunnel.

When you use the internet through an encrypted tunnel, your ISP can’t see where you go on the internet anymore. For example, imagine your ISP as a surveillance helicopter watching you walk the streets of New York. They could see every building you go in and come out of. But imagine if you went to a subway station and then began traveling underground. All they would know is which subway station you entered. The VPN is the subway station. The subway is your encrypted tunnel. 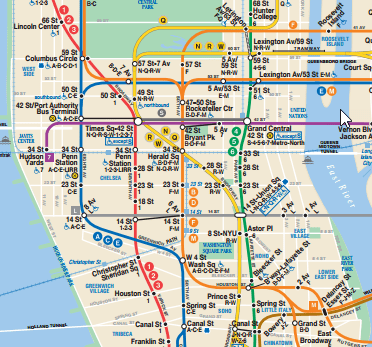 Should I Be Using a VPN?

Should you be using a VPN?

My answer would be yes. Like you, I’ve been using the internet without VPN protection for years. But I’ve started using one recently. I’m using a VPN now for two big reasons:

It’s a little bit like wearing a seat belt. Just because you’ve been riding around without a seat belt on and haven’t been in a fatal car accident doesn’t mean seat belts are unnecessary. It means you’ve been lucky.

Or, when it comes to abuse of your personal internet usage data, it could mean that it’s been happening and you just don’t know about it.

The fact is, browsing the internet is unsafe at any speed, in terms of privacy. A VPN is no guarantee of privacy and anonymity. But it’s one layer of protection that you can control.

Now that you know, you should do something about it.

Which VPN Should I Use?

The VPN service we recommend at groovyPost is called Private Internet Access or PIA for short. It’s kind of a boring name, but that’s not a bad thing: it does exactly what it says on the tin. It costs me about $2 a month and I get to use it on all my devices: Windows PC, my wife’s Macbook, my iPhone, my Chromebook, etc.

PIA isn’t the only game in town however, there are many private proxy services, web browsing anonymizers, and personal VPN services out there. Some are paid, some are free. Another good option is NordVPN, which is available for $2.89 a month on a 2-year plan.

It’s in your best interest to shop around a bit. As you do, though, I want to caution you against one thing: avoid the free VPNs.

I know, I know, it seems unjust to have to pay yet another monthly bill for something you’ve been doing free for years.

But hear me out.

The thing you should know by now is that nothing on the internet is truly free. Whether it’s Facebook, Google, or a free VPN proxy service, these companies aren’t providing these services out of the goodness of their hearts. They need to make a profit somehow, and collecting and analyzing your browsing data is how most of them do it.

If you use a free VPN, know that it’s highly likely that they are collecting and selling your data. This is obviously no better than your ISP doing it. In fact, it’s probably worse, because at least you know who your ISP is and at least you have a phone number where you can reach them. The same can’t be said for some dude in eastern Europe who coded that free VPN application that you just installed on your PC. (See also: This investigation from Motherboard which uncovered a fake VPN scam.) Trust me, don’t use a free VPN service. It’s not worth the disaster that could become your life. 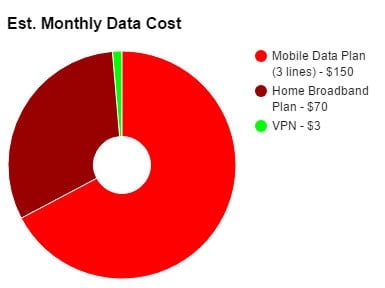 It’s a minimal price to pay for the privacy I deserve on the internet.

Oh, and one other thing: free VPNs can be monstrously slow. When you use a VPN, you are bouncing your traffic off another server somewhere in the world. Your internet speeds are bottlenecked by that proxy server you are going through. With a paid VPN, they’ll usually advertise a specific upload/download speed that you’ll get with their service and work to meet it. With PIA, however, they have over 3000 servers in over 25 countries. It’s extremely fast and secure. No shocker they are the leader in the industry which is why we recommend them to our readers.

So, if you’re looking for a list, here’s the VPN services I’ve reviewed and don’t have a problem recommending for my readers.

Okay, just kidding, I know this is starting to sound like a sales pitch. That’s not my intent here. This isn’t about convincing you to sign up for one VPN or another. The thing I’m trying to get across is that you should use some sort of VPN or encrypted tunnel. It’s a very small shift in the way you use your tech, but it has some real benefits. Before I wrote this article, I talked to Steve—who is something of an internet privacy fanatic—about if and why he uses a VPN and he unleashed a torrent of reasons why everyone should install a VPN today! It goes beyond internet privacy, but that’s obviously numero uno.

Top Benefits (I could think of…) of Using a VPN

A quick caveat to some of the tips above: If you do use VPN with location-based services, make sure you’re not in violation of your terms of service—some companies specifically bar this practice.

Why Not Just Use Incognito Mode?

Incognito mode or private browsing mode doesn’t come close to the same level of protection that you get from a VPN. If you’ve ever read the disclaimer on the Google Chrome incognito tab, that explains it:


Pages you view in incognito tabs won’t stick around in your browser’s history, cookie store, or search history after you’ve closed all of your incognito tabs. Any files you download or bookmarks you create will be kept.


However, you aren’t invisible. Going incognito doesn’t hide your browsing from your employer, your internet service provider, or the websites you visit. 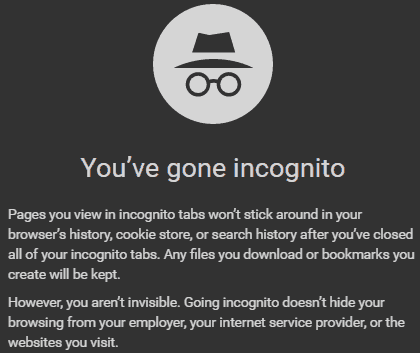 In other words, incognito mode is great for hiding your browsing history from people who use the same computer as you. And it also helps keep the clutter out of your search history and browser history (for example, if you want to let someone use your computer for an afternoon and you don’t want them overriding all your saved passwords and frequently visited websites). But it won’t stop your ISP or employer from spying on you.

Again, the notion of paying for a service to basically give you what you always thought you had (privacy on the internet) doesn’t sound like much fun. But it’s an excellent habit to get into. The landscape of internet privacy rules and regulations and marketing tactics is changing quickly. It’s changing faster than any of us can keep up with. It behooves you to add best practices for protecting your personal and private information, your financial information, and your family’s privacy as you become aware of them. Just like you’ve been slowly trained to use strong passwords and enable two-factor authentication, using a VPN will soon be one of those common-sense practices used by all prudent internet denizens.

I highly encourage you to start using a VPN today. Sure, we like Private Internet Access from our personal testing, however, there are many players out there. Just stay away from free…

Having trouble with your VPN on Windows 11? You’ll need to troubleshoot the problem before you subscribe to a service.