Some more interesting stuff for tablet fans. If you’re interested in getting an accessibly-priced tablet, Samsung has one for you. Of course, it’s not as cheap as the ZTE Optik. It will first be released in the UK, in March. 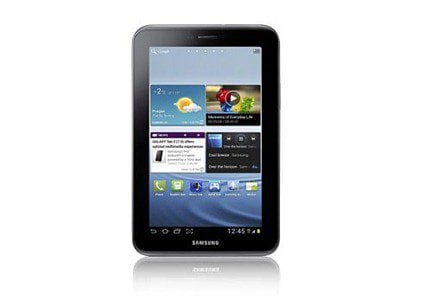 The CPU is a dual-core one, running at 1 GHz, and you also get a 3 megapixel main camera, as well as a VGA one on the front, for video chatting purposes.

Now, I’m not going to compare the Galaxy Tab 2 with what’s probably the most important Ice Cream Sandwich Tablet on the market now, which is the Asus Transformer Prime, as they’re in completely different product classes (the Asus has a quad-core CPU, as well as a 10,1 inch display at a 1280 x 800 resolution, plus a keyboard including an additional battery and so on…), but I’m going to say that this one has something that even the Asus tablet doesn’t have – a version featuring 3G connectivity.

Different versions will be available on the market at the same time – with Wi-Fi, as well as with both Wi-Fi and 3G.

And there’s another point where this tablet will sound tempting to many people – its pricing. According to Sammy Hub, that lists the prices for Scandinavian countries, the tablet will cost somewhere between $419 and $463 – Wi-Fi, and between $523 and $568 – Wi-Fi and 3G (a $712 price is listed for this version in Denmark, but they say it’s probably just a typo).