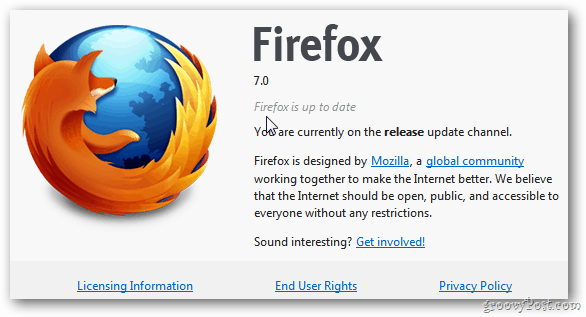 Mozilla today released Firefox 7.0 for Windows, Apple OS X and Linux . In a surprise unveiling today — the upgrade arrives just a month after Mozilla’s Firefox 6.0 major release — Firefox 7 via Mozilla is out. Mozilla promises a range of security, performance, readability and stability enhancements. We’ll bring you continuing coverage — expect our groovyReview team’s Firefox 7.0  first look, an in-depth analysis, plus tips, how to galleries and more advice and commentary in days and hours to come.

Mozilla has posted a full list of updates and fixes covering performance, stability, security and readability. This so far looks like a beefy upgrade.

According to the install guide, here are some of the highlights to expect.

Regarding Telemetry, watch groovyPost for our upcoming piece on how to opt out of this system data sharing system with Mozilla.  It’s a quick tweak so stay tuned. If you have tips and tricks you want to share with groovyPost readers on this new upgrade, send them in — just email me.

Thanks to JustJonjon1 for the following quick video tour of Firefox 7.0. Groovy.