In a push to better serve the planet, Apple has decided to no longer include power adapters in the packaging for its top-selling product.

In a push to better serve the planet, Apple has decided to no longer include power adapters in the packaging for its top-selling product, the iPhone. And yet, that’s not necessarily the biggest surprise you’ll soon discover if you plan on purchasing an iPhone 12 in the coming weeks.

In announcing the iPhone 12 mini, iPhone 12, iPhone 12 Pro, and iPhone 12 Pro Max, Apple also noted the 2020/21 handsets would no longer ship with a power adapter or Earbuds. New packaging for the previously released iPhone SE (2020), iPhone XR, and iPhone 11 will also come without the accessories.

Customers already have over 700 million Lightning headphones and many customers have moved to a wireless experience with AirPods, Beats, or other wireless headphones.

There are also over 2 billion Apple power adapters out in the world and that’s not counting the billions of third party adapters. So we are removing these items from the iPhone box which reduces carbon emissions and avoids the mining and use of precious materials.

Both statements are correct and make sense from an environmental perspective. When the biggest company in the world decides to no longer ship accessories with its best-selling product, fewer materials are used. Ultimately, that’s great for planet Earth. And yet, in an interesting twist, these products will now ship with a speedier USB-C to Lightning Cable, when previously they came with a Lighting to USB-A Cable. Meaning, most of the 2 billion Apple power adapters Jackson mentioned won’t work with the newer cable. So instead of having unused Earbuds and power adapters, we’ll now have unopened USB-C to Lightning Cables. 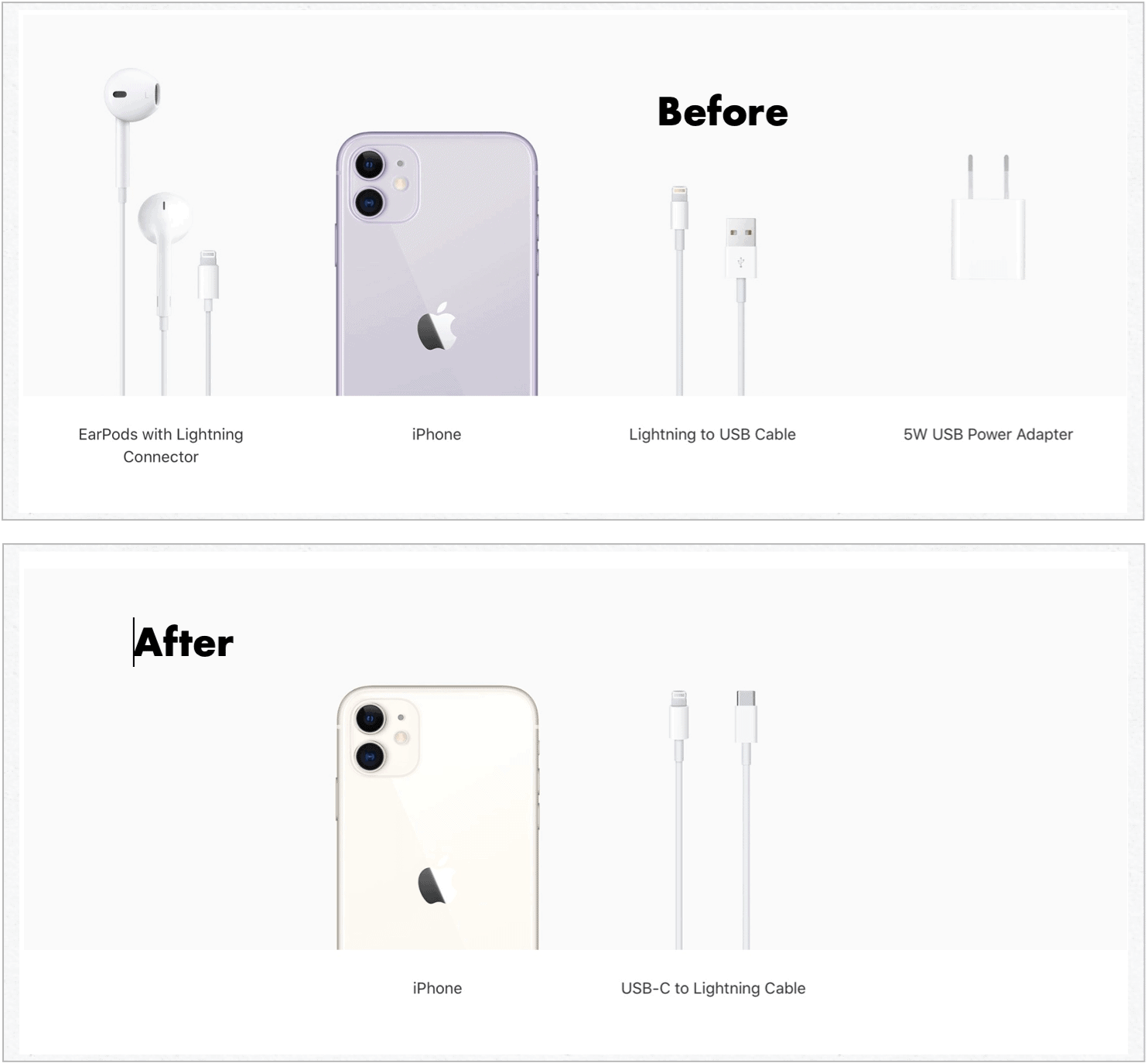 It’s the switch to a newer (and better) USB-C to Lightning Cable with the iPhones that could cause some short-term headaches for iPhone buyers who aren’t necessarily in the know or have various other Apple products around the house. Recall, the MacBook family now uses USB-C, as does the iPad Pro and upcoming iPad Air (2020).  These products ship with USB-C power adapters. The iPad mini (2019) and iPad (2020) still come with USB-A power adapters.

What Can You Do?

If you’re buying a new iPhone, there are different paths you can take when deciding how to charge your new device, including the following:

Apple’s decision to remove both Earbuds and power adapters from iPhones is the right thing to do in the long-term. It helps the planet and, in a small way, eliminates some clutter in most of our homes. And yet, the decision might cause short-term headaches for some iPhone buyers who might not be aware of the change. My advice: If you need an adapter, buy it alongside your new iPhone. You can buy an official USB-C 20W power adapter for $19 or find a third-party solution.