In a video game market where independent developers are finally able to break free from big studios, Humble Indie Bundle brings them together to promote…

In a video game market where independent developers are finally able to break free from big studios, Humble Indie Bundle brings them together to promote sales, charity, and freedom from DRM. This weekend Humble Bundle launched its fifth iteration, and it’s featuring some of last year’s top sellers. To consumers, this is a groovy opportunity to grab some great games at a steep discount.

This Humble Bundle includes five, best-selling games by independent development studios. Each copy is redeemable on Steam as long as you pay at least $1 for the bundle. Here’s what games this bundle includes, and you can click each one for a YouTube video that introduces each title.

You can pay whatever you want for the pack of games, and you can see what other people have been paying by looking at the on-page analytics. The top 10 contributors are also featured with a link to their twitter.

The only thing to lookout for is the overall average purchase. With this Humble Bundle you have to pay above the average price if you want the Bastion game to be included. On the payment screen you can also customize where your money goes; charity, game developers, or the humble bundle itself. 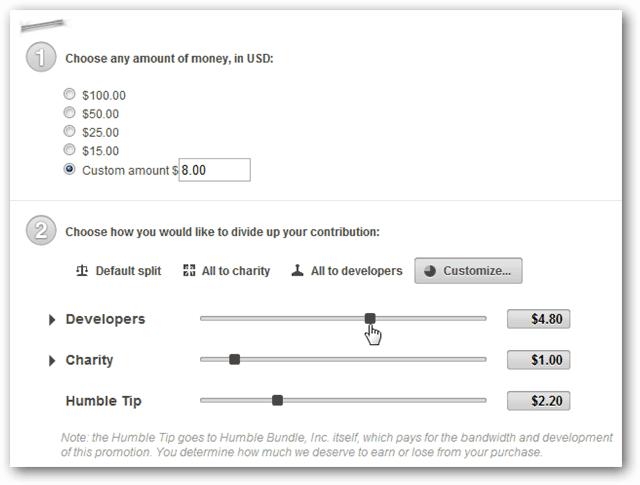 via – The Humble Indie Bundle