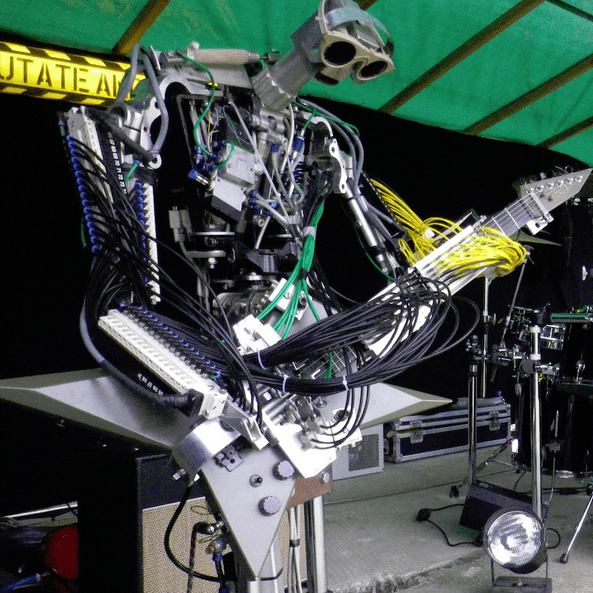 Do you like Metal and robots? Why not Metal playing robots made out of metal? Meet Compressorhead: A robotic heavy metal band made out of real metal.

A lead guitarist with 78 fingers, a drummer with 4 arms, and a solid metal kick. Compressorhead is a metal band that is literally made out of metal. The band is comprised of three robotic members that play with high precision., attitude, and 6 tons of rocking metal. Each band member is appropriately named; the lead guitar is called Fingers, the drummer Sticks, and the bass player is known as Bones.

Each robot can play in ways that wouldn’t be possible for a human. This is due not only to extra limbs and fingers but because of flawless precision and timing. And while the band may not have many personalities, it has the animatronic moves and style to mimic it. So, in case you’re worried about these metal musicians taking over the world and destroying humanity, you have excellent reason to be. But, there’s a slim chance of that happening without real AI built-in. These robots have to be programmed to play each song, which brings a unique perspective to the culmination of each musical piece. And no matter how you look at it, this band is certainly an accomplished feat of modern technological engineering.

The band has a series of videos up on YouTube that you might find rather impressive. Here’s one of them:

Compressorhead started in 2007, but back then, it wasn’t called Compressorhead. Stickboy (the drummer) was the first robot to be created, and he started out playing solo for gigs with Robocross Machines. In 2009 Fingers (guitar) was created and started picking up hard rock and heavy metal in 2011 when he got together with Stickboy to form the band known today.  But, it was just last January (2013) when Bones (bass) was born and completed the band. While not all of these robots were made by the same people or simultaneously, all of these robots know how to rock, and together they rock even harder. Just make sure they have a human sound guy because robots don’t hear the same as we do.

The cool thing about this band is, they can’t ever be accused of being “starving artists!”