iOS 11.2 includes new features and fixes such as wireless charging and online payment. But why hasn’t Apple released security update details yet?

It was a brutal week for Apple on the security front. First, the company’s desktop operating system, macOS, got a sudden wake-up call when a researcher exposed a bug found in the latest version, High Sierra, that allowed anyone to log in as the root user. The bug was immediately fixed, but it caused further problems preventing access to network shares. While the fix was immediate and flawed, it certainly caught the iPhone maker off guard, a company that has prided itself on the secure foundation of macOS for the past 15 years.

That said, iOS is the company’s crown jewel, and the latest version got a surprise 11.2 update over the weekend, fixing several bugs discovered in version 11.1.2 and adding new features and functionality such as Apple Pay Cash and faster wireless charging for the newer iPhone X and iPhone 8 devices. But, we always ask, should you upgrade? You might want to wait—read on to find out why.

What’s New in the iOS 11.2 Update and Should You Upgrade?

The iOS 11.2 update is a massive one, coming in at 325 MBs for devices such as the iPhone 5s and later, iPad 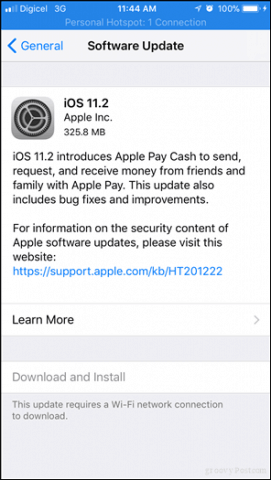 If you picked up an iPhone 8 or X recently, you will now be able to charge your device even faster using the 7.5w charging speed. This is a little bit faster than the standard 5w plug-in charger included in the box. If you own one of the new iPhones, this will probably be a welcome feature for you if you have been contemplating getting one of the Qi-based compatible pads or own one already.

Apple Pay Cash competes with similar services such as Square or Venmo. The service utilizes the built-in Messages app so you can easily make peer-to-peer payments. Of course, the rollout is limited to select countries, so I personally shouldn’t count on it reaching Jamaica in my lifetime. Nevertheless, I think Apple developing their own payment service is good since this only helps to increase competition resulting in better quality services and more value for customers.

There are, of course, the usual bug fixes, but strangely enough, we cannot go into the details at this time. Why? Well, Apple still has not published them on its security web page; instead, informing users details will be available soon. When they are ready, we will update this article with the details. Here are the full details of improvements and fixes in the new update.

Apple Pay Cash (US Only)
Send, request, and receive money from friends and family with Apple Pay in Messages or by asking Siri

Some cosmetic changes and a better understanding of the functionality, such as the new Bluetooth and Wireless Control Center toggles. Last month we detailed the changes introduced in iOS 11, which we came to understand doesn’t actually turn them off when you think you have done so. Instead, they are passively disabled to support functionality such as Airdrop, which doesn’t support Personal Hotspot when enabled. In addition, the control Center now lets users know when Bluetooth and Wi-Fi are disabled temporarily.

A couple of other important bug fixes users will find in iOS 11.2 include a fix for the Calculator app, resulting in numbers and symbols being ignored when entered in rapidly. Part of the fix required Apple to disable animations in the calculator app to allow quicker calculations. In addition, the 11.1.2 release introduced a bug that triggered crashes after December 2. Apple says local notifications cause the problem, and the workaround, for now, is to disable Notifications then install the 11.2 updates.

Users annoyed by the recent bugs discovered in iOS 11.2 should upgrade immediately for instant relief. But, with such massive changes, I wouldn’t be surprised if some new ones are ready to be found. But that’s the reality of software, especially a major release such as iOS 11. I have been monitoring social media over the weekend and several forums and haven’t come across any issues from users who have taken the plunge, but it doesn’t hurt to back up just in case.

Have you updated? If so, let us know in the comments what you think of the new features and improvements.