As if the recent Adobe Flash Player security exploits wasn’t enough to worry about, there’s a new threat for Windows users – this time from Apple.

As if the Adobe Flash Player security exploits weren’t enough to worry about, there’s a new threat for Windows users – this time from Apple. Security firm Trend Micro this week announced the discovery of two new critical vulnerabilities in QuickTime for Windows.

The Computer Emergency Readiness Team, which is part of the Department of Homeland Security, issued security alert (TA16-105A) on Thursday calling for all Windows users to uninstall the program.

Trend Micro says it hasn’t discovered any active attacks that target the newly found vulnerabilities (at least not yet). According to Trend Micro’s security bulletin:

However, since Apple has abandoned QuickTime for Windows and will no longer support it, the only way to protect yourself from an attack is to get rid of it. This security issue only affects Windows and not OS X systems.

To uninstall it from Windows 10, go to Settings > System > Apps & features. Scroll down to QuickTime, click it and then uninstall. 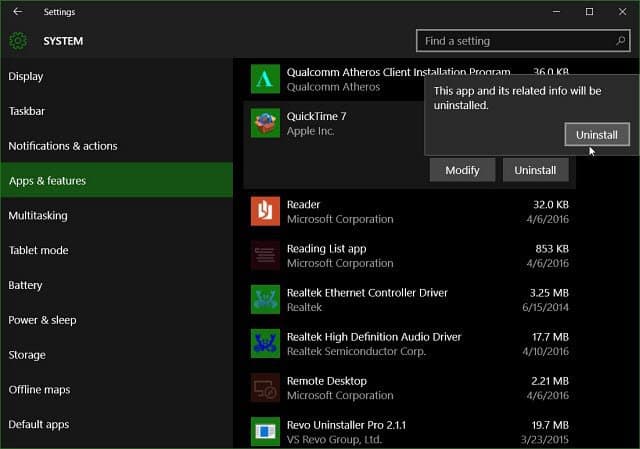 To uninstall it from Windows 7, open Control Panel and then select Programs and Features. Find QuickTime, right-click it, and hit Uninstall. Then follow the uninstall wizard on the screen. 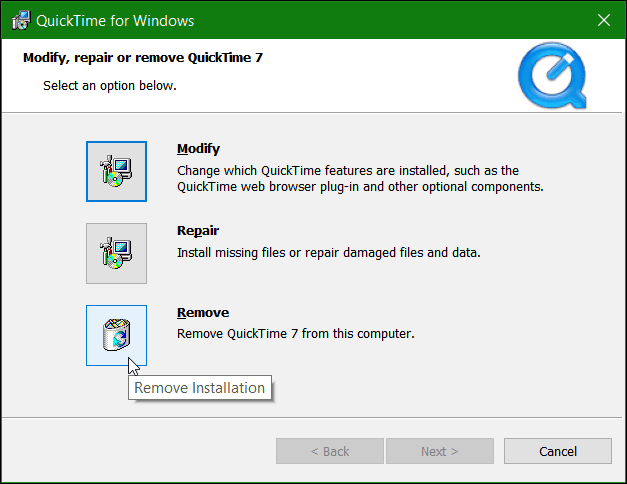 Keep in mind that Apple installs a bunch of software with iTunes, and using this method only gets rid of QuickTime, which is what you want.

It’s worth noting, though, that if you want to get rid of all traces of QuickTime that its built-in uninstaller typically misses, use a program like Revo Uninstaller to remove it.

For more details on uninstalling software thoroughly, read our article: How Do I Completely Uninstall Software on Windows?

Update 4/18/2016: Apple has been quiet about this situation, and today finally officially announced that it is no longer supporting QuickTime to the WallStreet Journal:

Apple confirmed to The Wall Street Journal that it is no longer supporting or updating the 11-year-old QuickTime 7 for Windows, and has posted instructions for uninstalling the software. Keeping it installed on your computer may pose a risk.

You can find the article here.

Apple QuickTime is long in the tooth and isn’t much anymore like it used to be. Even Apple’s own movie trailer site no longer requires it. Personally, I can’t even remember the last time I used it.

What’s your take? Do you use QuickTime on Windows or have you ever used it? Leave a comment below and let us know your thoughts on the subject.