Piriform launched a new update to its popular CCleaner desktop app. The most notable new feature is the ability to uninstall Windows 10 universal apps.

Piriform launched a new update to its popular (free for home users) CCleaner desktop application this week. The most notable new feature in this update is the ability to uninstall Windows 10 universal apps. Here’s a look at how to do it.

CCleaner has supported the ability to uninstall desktop applications for quite a while already. But this update allows you to remove universal apps. If you haven’t upgraded to Windows 10 yet, no worries, it works with Windows 8.1 apps, too.

But if you want to remove some of the Windows 10 apps you never use, you can now do that within CCleaner version 5.11. If you already have CCleaner installed, just update it by selecting Check for updates in the lower-right corner.

To remove Windows 10 apps, head to Tools > Uninstall. There you’ll see the universal apps mixed in with your desktop applications. Right-click the app you want to uninstall and select Uninstall from the context menu. Or, you can click the Uninstall button in the right column. 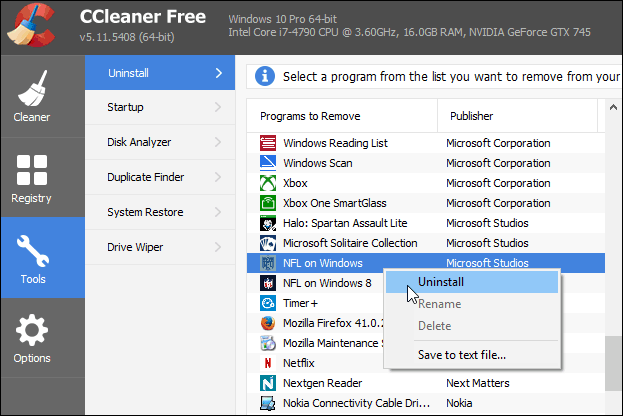 To make it easier to find a particular app you can sort by names, publisher, install date, and there’s even a search box.