Typing special characters with a Chromebook can be done using unicode. Here’s a handy reference to show you how.

I work part-time as an editor, which means I spend a lot of my time replacing hyphens with em dashes. So, when I bought my Chromebook, my life became a little different.

I’ve always typed em dashes normally to press Alt and type 0151 on the numerical keypad. The only thing is that Chromebooks don’t have numerical keypads. In fact, most laptops don’t anymore.

You get the idea. For those of you who’ve skimmed all this and are just looking for the solution, here it is:

How to Type Special Characters with a Chromebook: Unicode Input

When you press Ctrl+Shift+U in an input field on a Chromebook, you’ll get a little underlined “u” on your screen. Take a look at the example below. 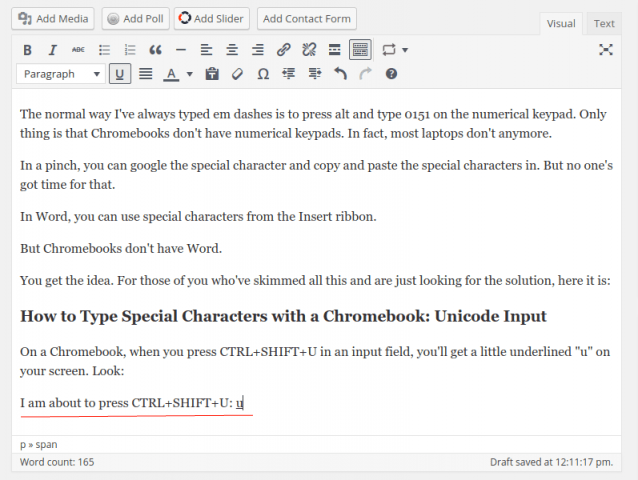 Now, type in the Unicode entry for the special character you want. An em dash is “2014.”

2014 for an em dash is easy to remember because 2014 is when St. Vincent released her self-titled album, St. Vincent. But for all other Unicode characters, you should check out this handy reference: Unicode-Table.com

Wikipedia also has a good breakdown of all the Unicode characters.

That table is massive, of course. So here’s a handy reference for the ones you’d most frequently use on your Chromebook.

Typing Subscript and Superscript in Unicode

The Unicode entries for subscript are U+208X, where X is the number you want in subscript. For example, H₂0 uses CTRL+SHIFT+U and then 2082.

Use the handy table below for your dashes and other esoteric punctuation.

If I missed one of your favorite Chromebook characters, drop it in the comments, and I’ll add it to the list.