If your computer is acting up, Windows has built-in tools like Performance Monitor to help you troubleshoot issues. Here is a detailed look at using the tool on your Windows PC.

Most PC owners often do very little to maintain their computer systems. Many people install Antivirus software and that’s the extent of it. But performance monitors offer a very valuable way for you to get some insight into why your computer might be misbehaving.

The term performance monitor (also commonly known as “perfmon”) sounds like an advanced IT tool, but it’s very accessible even for a regular computer user.

In this article, you’ll learn more about the “performance counters” that give you insights into every aspect of your computer. You’ll also learn how to graph the relevant counters so you can identify where any problems might be.

You can think of a performance counter like a sensor inside your computer that constantly measures the health of different systems and processes. A basic example of this is your computer’s processor. As you can imagine, in a healthy system the processor should be very active when loading or running applications, but inactive when you’re not doing anything.

Here’s what a standard performance monitor graph of % Processor Time looks like: 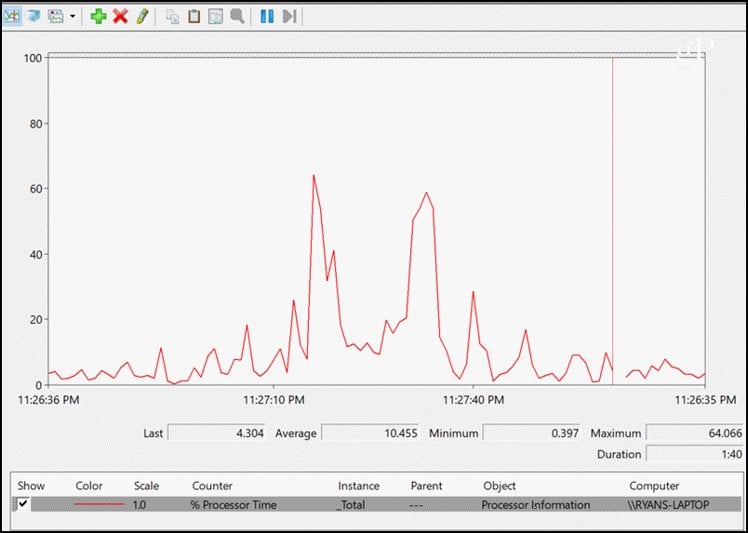 Even just this single counter can give you lots of insight into any symptoms your computer might be experiencing. For example, if the processor time never drops under 40 or 50 percent, that could be a sign that there’s some background application or service that’s bogging down your computer.

Let’s take a look at how you can create your own troubleshooting performance monitor graph, starting with monitoring the health of your computer’s hard drive.

There are two groups of performance counters when it comes to your hard drives; physical disk or logical disk.

While there’s plenty of interesting information you can learn from logical disk counters, for the purposes of troubleshooting we’re going to focus on the physical disk.

Here are the critical counters you can use to monitor the health of your physical hard drives.

To add counters to the performance monitor, just press the green plus icon at the top of the chart, find the “Physical Disk” section in the list of available counters, and then press the Add button to add the counters you want. 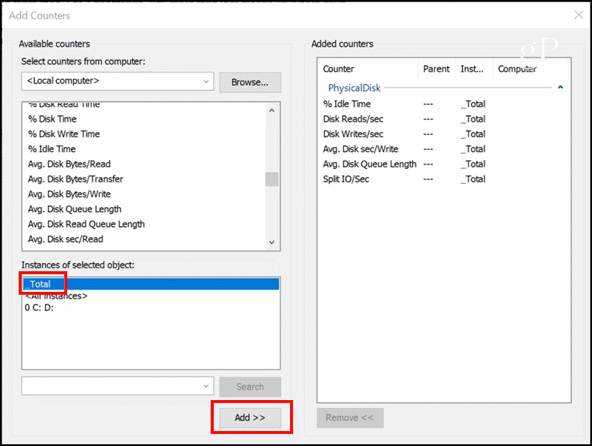 Click OK and you’re in business! Now you’ll see all of the counters you chose charting in real-time. 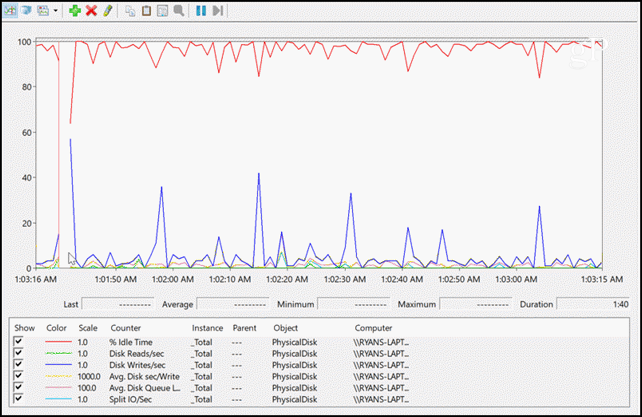 While the chart view looks pretty cool, you might be wondering how you can see if any of the values are above or under the limits that represent a problem? All you have to do is click Change Graph Type menu icon, and choose the Report option. 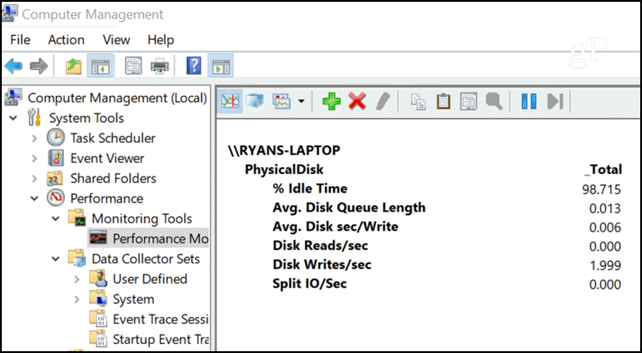 Any excessively high or low values will show up here consistently over time when you have any serious hard disk problems. We don’t cover Logical Disk counters here because these counters are reported for a logical unit (section) of the hard disk, and not as important as Physical Disk counters when troubleshooting hardware issues.

However, if you are concerned about monitoring whether your logical disk (like C: or D:) is low on space, you may want to take a look at the % Free Space or Free Megabytes counters under the Logical Disk section.

Memory is the “short term” storage area, otherwise known as random access memory (RAM), where the processor stores information that it needs to access quickly while processing different requests.

If your computer memory is healthy and working well, this information transfers very fast. The memory area also never fills up completely, because when you close applications, the OS is smart enough to “release” that area of memory for some other use. How do you know when problems are happening with your RAM? There are performance counters for that.

Adding all of these to a performance monitor provides you with a good picture of the health of your computer’s memory. 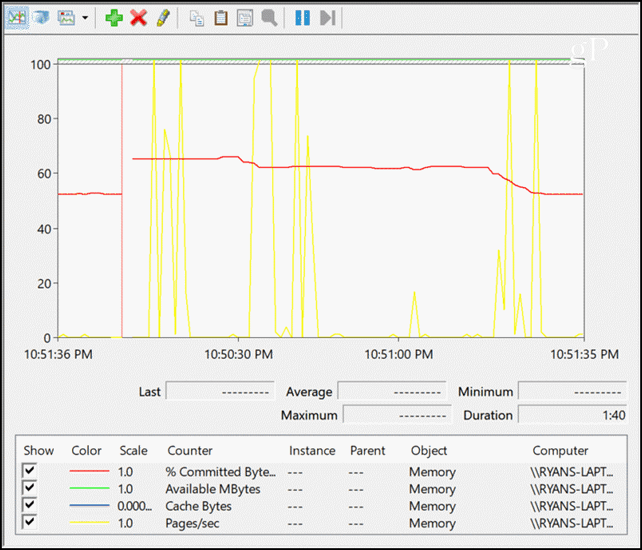 You’ll notice between 10:51:00 and 10:51:35, the % Committed Bytes dropped. This was from closing several Chrome tabs and other open applications. Each spike in Pages/sec were a direct result of actively using different applications.

It’s fascinating to see how these performance counters show you what’s going on with your system, and how clearly they can reveal to you that something is going wrong.

Another problem that can make people think their computer is slowing down is network issues. Many times people assume that just because web pages are loading slowly, it means their “computer is slow.” The reality may be that the computer is running fine, but either the local network or the Internet connection itself is the bottleneck. How can you know? Let’s go back to the performance counters.

Keep in mind when you’re adding these counters to the performance monitor, you’ll need to select the correct network card you want to monitor. 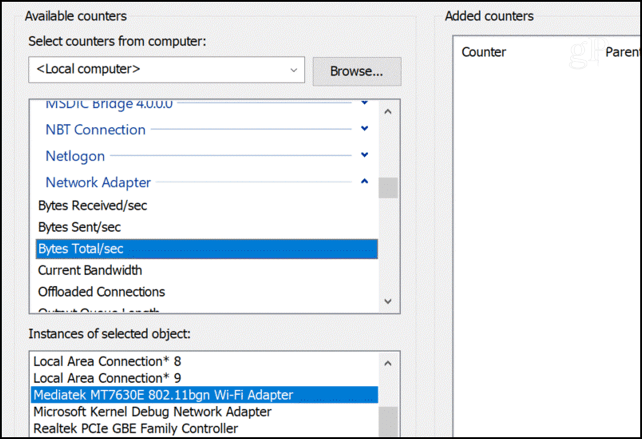 A healthy network card should look something like this (if you’re actively using the Internet). 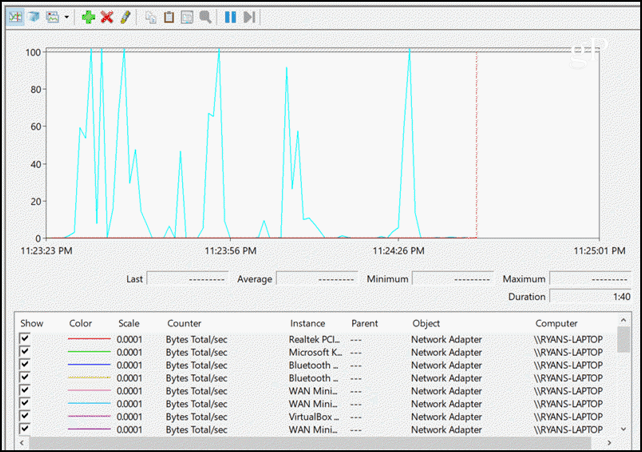 The last, and probably the most important, area of the computer that you’ll want to monitor with performance counters is the processor and individual processes.

Many computers these days actually come with multiple processors, so you’ll see those listed when you add the performance counters. You can monitor all of them at once, or individually. If you’ve reviewed performance monitors for all of the other areas of your computer and you can’t see anything that might be slowing things down, the processor or core system could very well be the culprit.

Here are the most important processor-related performance counters you should add when you’re building you perfmon chart. 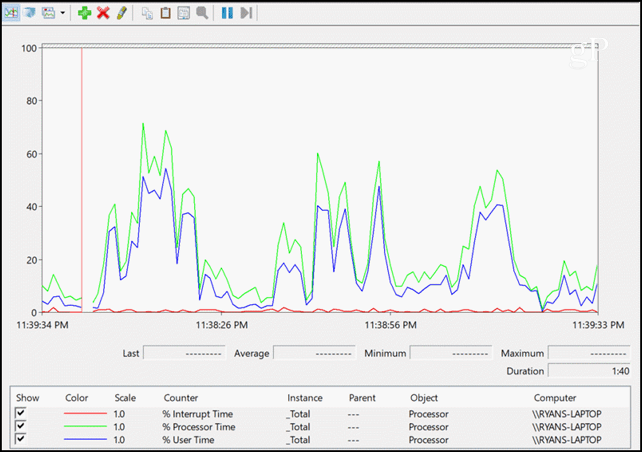 Here are the most important process-related performance counters to monitor. This can tell you if there’s an application causing performance issues. 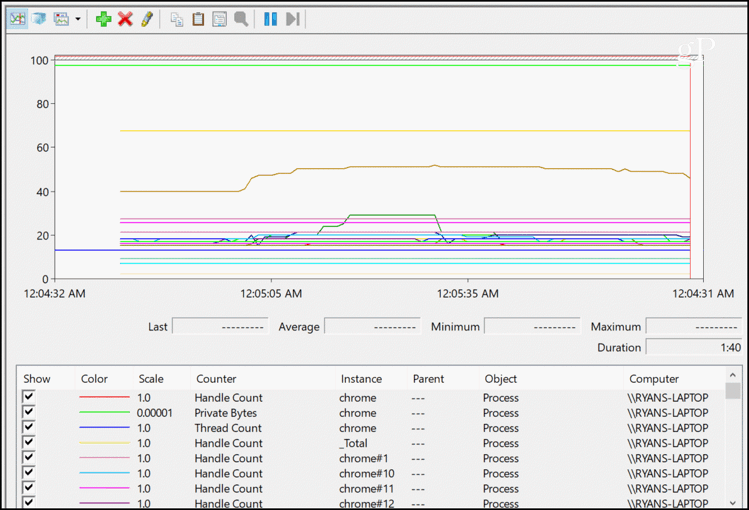 Any of these lines headed only in an upward direction would identify an application (process) problem. Many times, a quick glance at these charts tells you all you need to know to fix the problem.

So, the next time your computer starts acting like a school bus in a mud bog, launch the performance monitor and start poking around some of the counters described above. You’ll be surprised just how quickly you identify something that will lead you to an answer. Sometimes all it takes is a replacement part or uninstalling an application, and it’s like you have a brand new computer again.