Google introduced the ‘Take a Break’ feature to YouTube to help your digital wellbeing. Now, it lets you track the total time you’ve spent on the service.

Google announced it is rolling out a new “stats” feature that will help you keep track of how much time you spend watching videos. It’s part of the company’s Digital Wellbeing initiative which it introduced during the Google IO developer conference earlier this year. The idea is to add features to its apps and services that help you better balance your tech and personal lives. Like the Take a Break feature for YouTube, this will also help you manage the amount of time you spend (or waste) on the platform.

Google announced it is rolling out the feature today, so if you don’t see it now, you should soon. If you have it, the next time you launch YouTube, you should see a notification pop up. Just tap the “Show Me” button and you’ll see the “Time Watched” section. You can also get to it later by tapping your profile icon and choosing “Time Watched” from the menu.

The time is broken down into four different categories including the day, the previous day, past week, and the daily average. The stats are tallied based on the YouTube Watch History feature that tracks the videos you’ve watched on the platform. 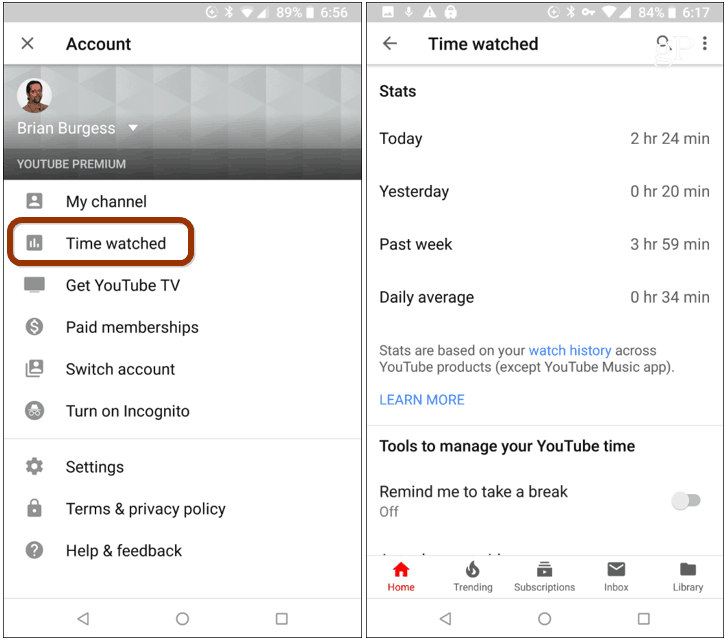 But there are a few things to keep in mind here. Anything you’ve watched while using Incognito Mode isn’t tracked. The same is true if you pause or delete videos from your history. It’s also important to know that YouTube TV viewing is included with your stats. Obviously, if that is part of your cord cutting solution, that will raise your average viewing time considerably. But Google told TechCrunch that it’s looking at a way to remove the YouTube TV viewing from the feature but doesn’t have a time frame. Also, at the time of this writing, it’s not clear if your usage of  YouTube Music is part of the stats.

The Digital Wellbeing program isn’t just for helping balance time spent for entertainment. Recently, Google introduced the Out of Office entry for Calendar that helps alert people when you’re not available to respond to requests or accept meeting invites.