Here’s a look at using the Roku screen mirroring feature and streaming content or mirror your device from an Android smartphone or tablet to the big screen.

Roku, last month, released the beta version of a new screen mirroring feature for Windows 8.1, Windows Phone, and Android devices. This version allows you to stream media content from your Android phone or tablet via the “cast” button in various apps. It also lets you “mirror” your screen which means everything you do on your phone is shown simultaneously on the big screen.

When we covered this story, we showed you how it works with Windows Phone. You can see that side of the coin in our article: Roku Adds Screen Mirroring to Windows and Android Devices. Now we’ll go ahead and take a look at using this new Roku feature to stream content or mirror your device from an Android smartphone or tablet.

Note: This new feature is in beta and only applies to the Roku 3 Model 4200 and Roku Streaming Stick HDMI Version Model 3500. You’ll need to be running Android 4.4.2 or higher, and you can see a list of all supported Android devices here.

Stream Media from Android to Roku 3 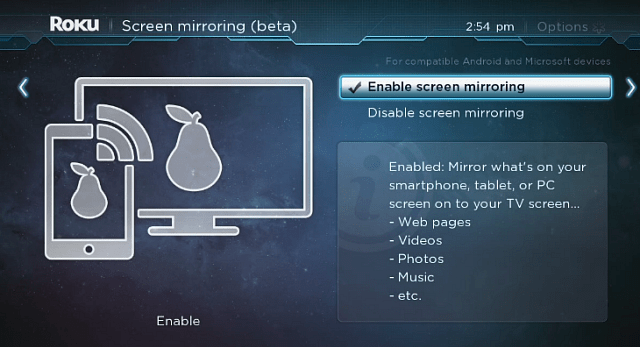 Now on your compatible Android device, you have a couple of options. You can stream videos, podcasts, and music in most apps that have the “cast” button. Just tap that, and you’ll see your Roku 3 and other compatible devices you might own, like Google Chromecast. 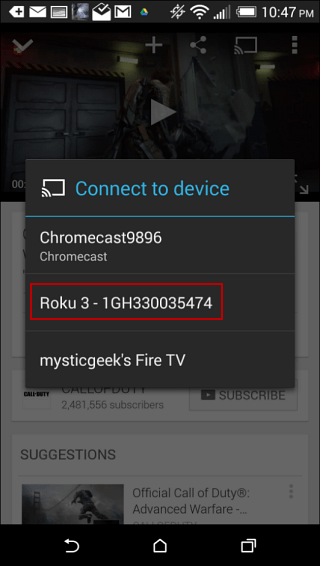 You can also mirror your phone or tablet through the Roku to your big screen. Each Android device is a bit different, so you will need to find where the “cast screen” option is.

For the HTC One (M8) go to Settings > Media output. The phone will scan for compatible devices, and when it finds your Roku, just tap it. And then you’ll see the screen below telling you it’s connecting to the Roku. Once it does, your phone’s or tablet’s screen will be up on the big display.

This feature is an excellent option if you want to show a presentation, an individual app, or display photos and videos you’ve taken without everyone having to huddle around your phone or tablet. It’s also worth noting that if your phone or tablet is capable of landscape mode, it will change on the TV as well. 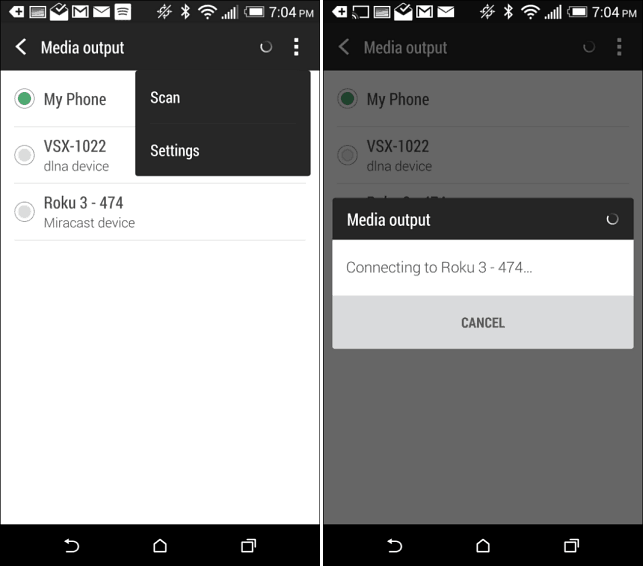 On stock Android like on a Nexus 7, you can mirror the screen by going to Settings > Display > Cast screen. Unfortunately, I’m not able to get my Nexus 7 (2012 model) to connect to anything other than a Chromecast.

I am curious if the newer model works. If you’ve tried it and got it to work, let us know in the comments below.