A few weeks back, Google Software Engineer Corey Goldfeder posted a blog about a groovy Apps Script that he had put together: Gmail Snooze. Essentially, what this does is allow you to “snooze” a conversation and have it return to your inbox within a day or two or three or four or five. This is helpful for proponents of the Inbox Zero productivity system, of which there are many in the Googleplex.  Here’s a video of Gmail Snooze in action:

Anyhow, I gave it a shot right when the blog post first came out, and was frustrated at my lack of success. The setup is fairly simple, all you have to do is copy and paste the script into the script editor (which I didn’t even know existed up until now). It’s all laid out in the Gmail Blog post. However, when I followed the steps, I kept on getting automated emails with the subject “Summary of failures” (fun fact: also the name of my forthcoming memoirs) that said: “TypeError: Cannot call method "getThreads" of null. (line 28).”  Also, when I ran setup, I didn’t get the labels made, as per the video showed.

Today, I tried it again, but this time, I made sure to save the Google spreadsheet before creating the script.

And that made all the difference. So, what you have to do is exactly what it says in the Gmail Blog post, but before you do it, create a new Google spreadsheet in Google Docs, give it a name and save it. Now everything works fine. 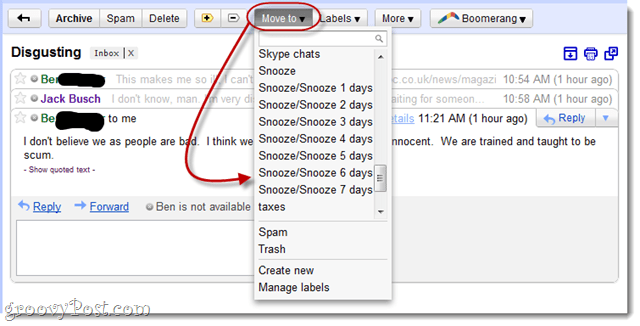 Boomerang for Gmail – Schedule, Snooze and Follow-up on Emails 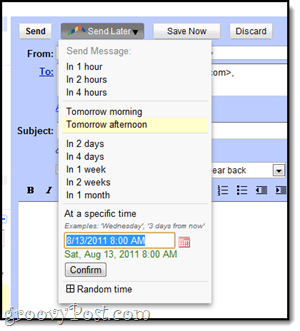 The reason I didn’t troubleshoot this earlier is because, fed up with the script, I decided to try out an easy alternative: Boomerang. Boomerang is a Google Chrome extension which does essentially the same thing as Gmail Snooze, but it’s a little bit more user-friendly. You can get Boomerang from the Google Chrome Web Store.

Overall, I like Boomerang, but I’m not crazy about how it un-snoozes things (it adds some mumbo jumbo to the thread) and it’s also not free. You do get a free trial for 30 days. Just a taste to get you hooked. Thereafter, it’s $4.99 a month. There is a free version that limits you to 10 message actions, but that’s not really going to get you far.

Boomerang does more than just snoozing Gmail messages, though. It also lets you:

The schedule emails feature is quite nice, and if you are a Gmail power user with $5/mo to spare, I say go for it. But if you’re subsisting on Ramen and not afraid to fiddle with the Apps Script Editor, try Gmail Snooze again—but this time save the spreadsheet before you create the script.

Update: Earlier, I complained about the way that Boomerang adds stuff to the thread in order to bump it up in your inbox: 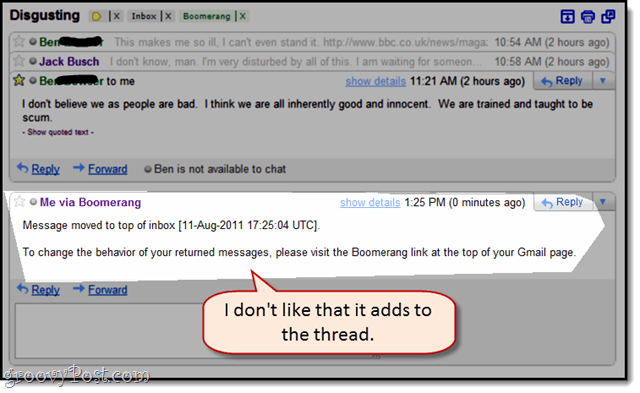 As pointed out by Matt from Baydin, the developers behind Boomerang, you can easily change the behavior of Boomerang’s returned message.  Just go to Boomerang > Manage Scheduled Messages and uncheck “At the top of your inbox.”  Thanks Matt! 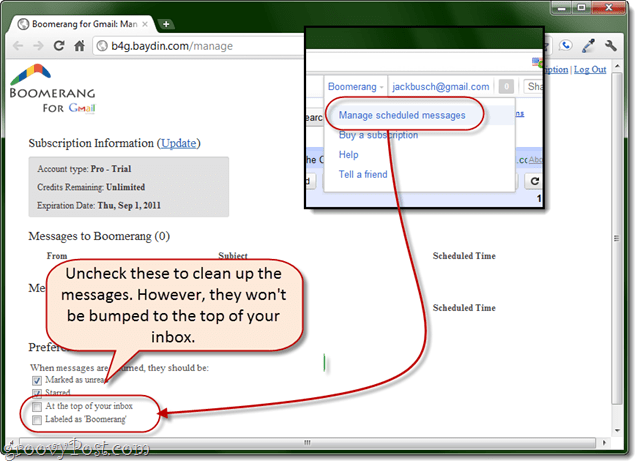