Apple just released their new MacBook Pros, and they included a port armed with a new feature called Thunderbolt.  Apple worked a deal with Intel which gives them exclusive rights to the technology for 1 year (Sorry Dell & HP).  Apple claims that it is going to bring “performance and expansion never seen on a notebook before.” They are certainly hyping up the technology, but is it as good as they say it is?  I would say so, and here is why.

Thunderbolt (previously known as Light Peak) is a new port available that allows computers to connect to external devices.  As far as speed is concerned,  Thunderbolt can transfer 10 Gigabits per second in both in and out simultaneously, giving it a 20 Gigabit total bandwidth.  The port connects to an internal expansion bus on the computer, and it uses a Mini DisplayPort connector.  Thunderbolt is powered by the same technology that PCI Express is based upon, and because of this it can easily be added to just about any current Intel chipset.  However, Intel has struck a deal with Apple, as a result Thunderbolt will be exclusive to Apple until 2012; a 1 year head-start, but I believe this is only regarding motherboards, not peripherals.

When looked comparatively to existing connections, Thunderbolt is miles ahead in terms of speed, but that is just the beginning of it.  In relative terms, you could transfer an entire Blu-Ray video in 30 seconds, and a regular DVD in only a couple of seconds – it is FAST!  And Intel expects to double its speed within the next few years. 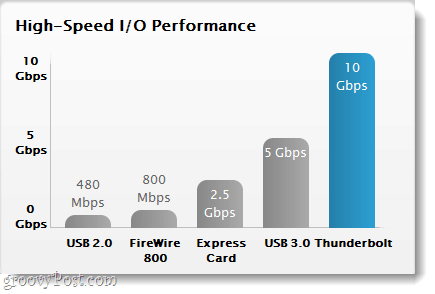 Many Devices, One Port

Thunderbolt allows you to connect up to 7 devices through one port on your computer.  Multiple device interaction is accomplished through “daisy chaining.”  What is daisy chaining you ask?  The easy way to explain it is that you can connect to a device with two Thunderbolt ports, and the second port is used to connect to yet another device.  The image below should help illustrate. 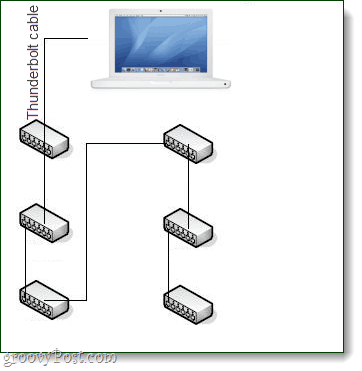 Currently due to manufacturing costs, Thunderbolt cords are manufactured out of copper and is limited to a distance of 10 feet.  In the near future, Intel already has planned an optical fiber cable version up to 330 feet long.

Thunderbolt has a lot of great things about it.  Basically they’ve taken PCI-Express and externalized it using Mini DisplayPort.  It is fast enough to run just about anything, and once they figure out how to lower the costs of the optical cords it should all but eliminate latency on internal networks that implement it.  Overall Thunderbolt is some groovy new tech, and although it sounds like it isn’t quite ready –it is a bummer only the new MacBooks will be implementing it during 2011.