Earlier this week Yahoo trimmed it’s workforce laying off roughly 600 employees.  Following the layoffs are more changes, and it seems Yahoo doesn’t know what to do with itself so they’re taking a cut-n-run approach.  The Delicious social bookmarking site will be closing in the next few months, followed by other Yahoo services.

It has been 5 years since Yahoo acquired Delicious from the developer Joshua Schachter, when I first saw news of the acquisition I was excited because I thought Yahoo would take it to new heights.  In reality, since then they haven’t done much with it, Delicious has sat around nearly in the same condition that it was in since the purchase, and now Yahoo is shutting it down.

To go along with Delicious, other services being cut include Altavista, Yahoo Bookmarks, Yahoo Buzz, and MyBlogLog.  Neither of the two latter services were as popular as delicious, and they also seemed to be an internal conflict of interest.  Yahoo Buzz was a social site that cloned Reddit, while MyBlogLog was just like a Myspace for blog sites.  Delicious on the other hand already had social media covered for Yahoo, so somewhere Yahoo developers got lost in translation and decided that they should make a slew of new services rather than update Delicious –the inevitable shutdown was the result.

According to PCWorld, Yahoo stated that several more applications and services will be shutdown or merged over the course of several months.  But, if Yahoo had simply done this earlier by merging Buzz and MyBlogLog into Delicious they could have really had something great, but they apparently aren’t planning to do that.

This news comes from a leaked source on Twitter regarding an internal slide at a company meetings.  Yahoo has already responded and confirmed that it will be shutting down services, but unlike the slide they didn’t mention that Delicious would shut down. 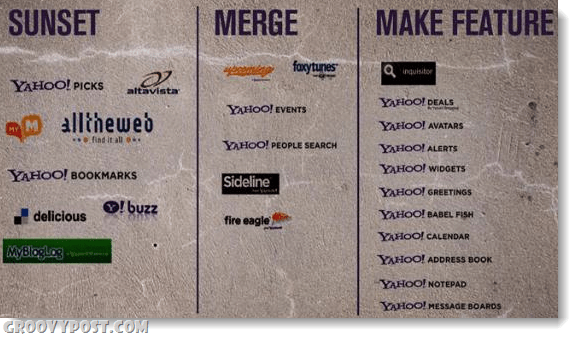 Yahoo remains within the top 5 most visited websites of the internet, but confidence in the company has been slipping over the past few years as their new services, acquisitions, and brand continually fail.  From a professional standpoint, I don’t think their new line-up of “make-features” inspires much -if any- confidence.

Update:  Yahoo no longer shutting down Delicious, but will sell to the highest bidder.

Due to the overwhelming amount of bad press Yahoo received over the shutdown of Delicious, they’ve changed their minds and released a statement saying:

Is Delicious being shut down? And should I be worried about my data?

No, we are not shutting down Delicious. While we have determined that there is not a strategic fit at Yahoo!, we believe there is a ideal home for Delicious outside of the company where it can be resourced to the level where it can be competitive.

What is Yahoo! going to do with Delicious?


– We’re actively thinking about the future of Delicious and we believe there is a home outside the company that would make more sense for the service and our users. We’re in the process of exploring a variety of options and talking to companies right now. And we’ll share our plans with you as soon as we can.