In this week’s installment of his Home Recording series, 8bitjay gets down to the fun part — making music. This week he starts by creating easy drum kicks.

The kick drum is one of the most important parts of your music, especially if you’re making electronic or dance. Even if those two couldn’t be further away from your genre, the kick drum is important because it often forms the foundation of the music. It’s what other instruments follow along to, and it’s the part that listeners typically follow when they bob along to the beat. 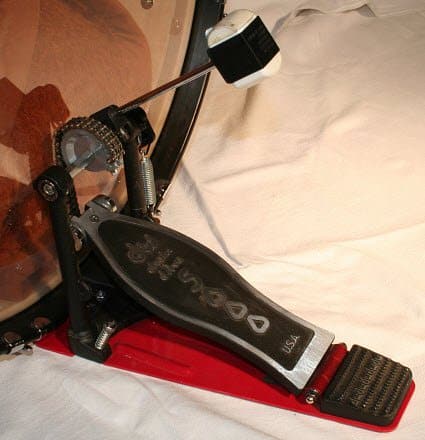 Most music sticks to a 4/4 pattern. It’s easy to construct around, and it’s really just the easiest one for the listener to follow. You can write in any time signature you want, but 4/4 is the most common. It just means there are four kicks on every bar.

For our example, we are going to use Logic Pro. It’s the DAW (digital audio workstation) I use at home. Most DAWs have similar functions. You may have to check the manual or a guide on how to load a kick sample into your DAW for programming. Each will require a slightly different process. However, once you’ve loaded the sample, the programming aspect will work pretty much the same across all DAWs.

Most pop music runs at a tempo of about 120bpm (beats per minute). Every DAW that I know of launches with a default 4/4 time signature at 120bpm. It’s something we’ve grown accustomed to hearing, and it just tends to work for most of us. The one thing I really want you to remember here is that all of this is just a foundation for your future music-making goals. You can make a song at any tempo you want. You don’t have to use 4/4. However, once you learn these very basic things, you will be able to make the kinds of patterns and music you want to make. The hardest part is gaining that initial experience to help you get started.

Let’s start with that kick pattern. First, you will want to draw in a one-bar loop as I’ve done below:

After that, you will begin drawing in your individual kick drum hits. Here, I’ve drawn a basic 4/4 kick pattern. It’s just a series of four thuds that loop. You hear it in most music: 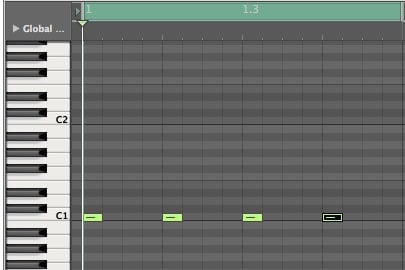 After drawing the initial kick pattern, I will copy that loop three more times. This means four bars of 4/4 kicks:

Normally, this works as a basis for your song. I like to use those kick patterns and build around them. Still, no two songs are constructed the same way. Let’s take a look at what we can do to add a bit of interest to that repetitive thud loop.

On the second bar, I may add an additional kick drum hit near the end of the bar. Then I may add a variation of that on the fourth bar as shown: 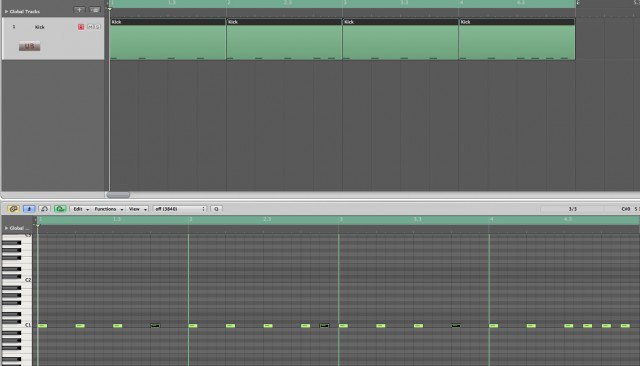 Above, you can see that I have four hits for the first bar. The second bar adds an extra kick before the third bar comes in with its four hits. Finally, the forth bar has two additional hits, making something that almost sounds like a drum roll with the kick. Sometimes this sounds cool in the context of the song. Other times, it doesn’t. The idea is to play with things until you get something you like.

It’s also cool to play with velocity in your pattern. The velocity is how hard the kick is hit. It makes it louder or quieter, adding some dynamics to your kick. You don’t want every beat to sound like the exact same hit. Sometimes, I make the first hit of each bar a bit stronger, then maybe lower the next few a little bit. If I am going to add a double-hit, I may increase the velocity of those slightly give it a bit more punch. I like to imagine a real drummer trying to play the parts, and adding a little more power to some of the hits for emphasis. Sometimes, you just have to envision it the way a real player may go about it.

Below, you can see that the first note has a higher velocity than the second. The third note has a higher  (it’s also a shorter hit. This may make a difference on sounds that ring out longer) velocity than that second note, and the fourth note is the softest of the bunch (but it has a slightly longer hit. If the kick sample rings out, you will hear a little more of that longer note.). The variations are slight, but that’s all you need to really change how things sound: 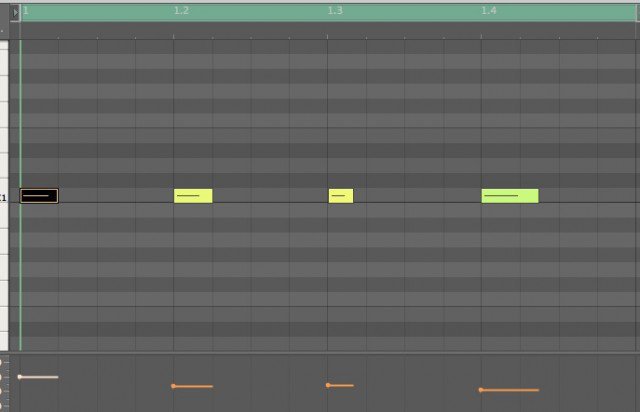 It’s also worth noting that nothing you’re doing here is committed to tape or anything. You can play around with the patterns and the sequences until you find something you like. What you start with may not sound anything like your end result. In fact, my initial kick patterns rarely do. When I work, I tend to build with a basic 4/4 loop for the sake of keeping my beat. After that’s done, I start building snares, high hats, bass parts and leads around it (all that is for another day). Once much of the song is arranged in what I call the “backbone” of the song, I start adding all the additional parts, such as more drum variations and fills, etc. This helps make the song much more interesting to the listener.

Again, no two songs are approached the same. Sometimes I do create all my kick patterns first. I once created the bass line before I made all the other parts, and I built my drums and instruments around it. No one approach is right or wrong. However, you will often find one that works best for you. This kick pattern as the anchor is the most common. It’s easy to work with, and it helps you keep the beat as you start creating and recording instruments around it.

For now, go ahead an play around with kicks and kick loops. Make stuff that sounds cool or interesting. Don’t get sloppy, but make patterns that sound cool. You’d be surprised what you can do with one instrument.

Next week, we will take a look at adding snare hits and high hats to your drums to form a more complete sounding drum pattern.

You can check out sections 1-4 below. They will teach you how to set up your home studio if you’re still working on that part: