T-Mobile One’s unlimited data plan isn’t quite as unlimited as advertised—especially when it comes to tethering. We’ll show you three ways to get what you paid for while using mobile data on your PC.

T-Mobile’s new standard all-unlimited talk, text, and data plan is called T-Mobile One. Supposedly, it’s simplified now without tiers of data caps, just one simple plan without limits. But is that really the case or is this a false embellishment?

The first thing I noticed after lucubrating through the terms and conditions was the tethering. If you’re a farmer like me and you don’t live in an area with high-speed internet access, the tethering becomes a make-it-or-break-it deal. With the new T-Mobile One, there is unlimited tethering at only 2G limacine speeds (512kbps), which stultifies any meaningful use. Getting decent speeds requires an additional $15 add-on for 4G tethering and has a data cap set at 5GB per month.

Your data still isn’t truly unlimited even if you’re just planning on using your phone or tablet—which, by the way, T-Mobile and other carriers still fail to understand that there are Windows and OS X powered tablets, not just Android and iOS. But anyhow, if you are using what T-Mobile considers a “phone or tablet” the data cap is effectively still set at 28GB because after exceeding 26GB, speeds slow way down from throttling. T-Mobile doesn’t specify how slow it’s going to be after 26GB, but from my testing with previous T-Mobile data caps, it’s looking like less than 512kbps.  With that said, the tricks I have below aren’t going to offer you truly “unlimited” tethering data either because that 28GB soft-cap will result in T-Mobile slowing you down if you go over in one billing cycle. Not everyone will experience the post-28GB throttling, but do keep in mind that on previous versions of T-Mobile’s unlimited data plan (if you’re lucky to be grandfathered in) this throttling wasn’t present.

Update: We were contacted by a T-Mobile representative who clarified that only 3% of their customer base may see throttling above 28GB on a single line.

The next thing is the HD video. The new T-Mobile One plan offers “unlimited video” data, but it’s only at 480p. True HD (720p or greater) requires an extra $25 add-on per-line. This feature was previously free and only required activation with the My T-Mobile account settings.

Now if you find T-Mobile’s fine print to be anathema, here are three different ways to work around the tethering limits.

Editor’s Note: Before you use these tricks, make sure you don’t abuse them. T-Mobile CEO John Legere has announced his intention to go after “Network Abusers” who are using as much as 2 TB of data and are circumventing T-Mobile’s throttling and data caps. Abusers get kicked off the unlimited data plan. If you only use a few extra GB, you shouldn’t raise any red flags. Just don’t go nuts. Do the data equivalent of driving 5 MPH over the speed limit. Or, if you fear the wrath of John, maybe skip this tip.

Note: If you see “error: device not found” it is usually because A) you need to update your phone USB drivers on your PC or B)  your USB cable isn’t capable of transmitting data because it is only designed to charge the phone or C) USB Debugging isn’t enabled. 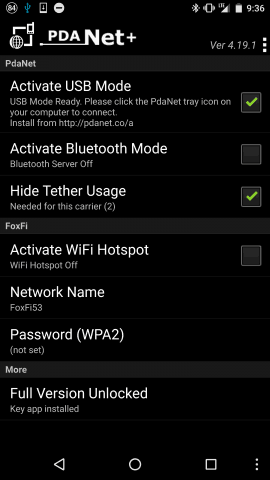 Note: If you find PdaNet isn’t working, or T-Mobile is severely throttling your connection, installing a custom Android ROM as Cyanogenmod can help. This is in part because, on many phones, T-Mobile has pre-installed network monitoring software designed to detect extracurricular data use.

While it may slow down your connection a bit, one sure way to get around any sniffing T-Mobile might be doing to detect your tether usage is to tunnel your traffic through a  VPN (Virtual Private Network). This can be done on the individual PC you want to tether, or you can tether the phone’s entire data stream. There are too many options here to list them all, but when it comes to simplicity PIA (Private Internet Access VPN) is the best and easiest to set up and will run you about $39.95 a year ($3.33 a month). PIA has a Mac, Windows, iOS, and Android client which just works.

So that covers it. For me the Dun=0 trick and PdaNet worked well enough, I didn’t have to resort to a VPN, but your mileage may vary depending on what phone you have and the total network traffic in your area. Please post any questions or issues you have below, and I’ll do my best to help out!