With thousands of hours of content already available for kids and adults alike, HBO Max is set to make a mark.

First announced in October 2018, HBO Max is finally here. The subscription video-on-demand streaming service from WarnerMedia Entertainment features over 10,000 hours of content at launch with more coming in the months ahead. Here’s a  look at how to sign up for the service and how to get started.

If you have some sort of subscription to HBO, it’s likely (but not guaranteed) you already have access to the new service.

HBO Now subscribers who are direct-billed through Apple, Google Play, Samsung, Optimum, Verizon Fios Internet, Consolidated Communications, and Liberty Cablevision of Puerto Rico have access to HBO Max right now. If you’re one of these users, you might have already noticed your HBO Now app has been replaced by HBO Max.

To get started, simply login in with your existing HBO Now email and password, then choose Access all of HBO Max.

Select cable and satellite HBO subscribers also get HBO Max for free. These include those using Apple TV Channels, AT&T TV, Comcast, Cox, DIRECTV, Hulu, Optimum, Spectrum, Verizon Fios, and Xfinity. This list is always changing, and for the latest, check out the HBO Max website at this link.

If you don’t yet have an HBO subscription or one that supports HBO Max, you can sign up for the new service online. It’s $14.99 per month, with the first seven days available for free. You can also sign up using the official HBO Max app on Google Play, the Apple App Store, and through your a Samsung smart TV. Just download, then open the HBO Max app to get started and begin your free trial.

WarnerMedia is part of one of the largest conglomerates in the world, AT&T. Therefore, it shouldn’t come as a surprise that even at launch HBO Max is available nearly everywhere where those in the United States can access streaming data.

You can access HBO Max on the following devices:

You can also stream HBO Max using Chromecast, Apple Airplay, and by using an HDMI cable and connecting your computer, phone, or tablet to your TV.

At the time of launch, HBO Max is not available through Roku or Amazon Fire devices. No doubt, these exclusions are only temporary and will be resolved once agreements between the parts are signed.

Get Started with HBO Max

After signing into HBO Max for the first time, you’ll be asked to create one or more profiles. In a family environment, you can create profiles for adults and children alike. Creating profiles is the same across all platforms; in the examples below, we’re adding profiles using the HBO Max iPhone app.

To create an adult profile: 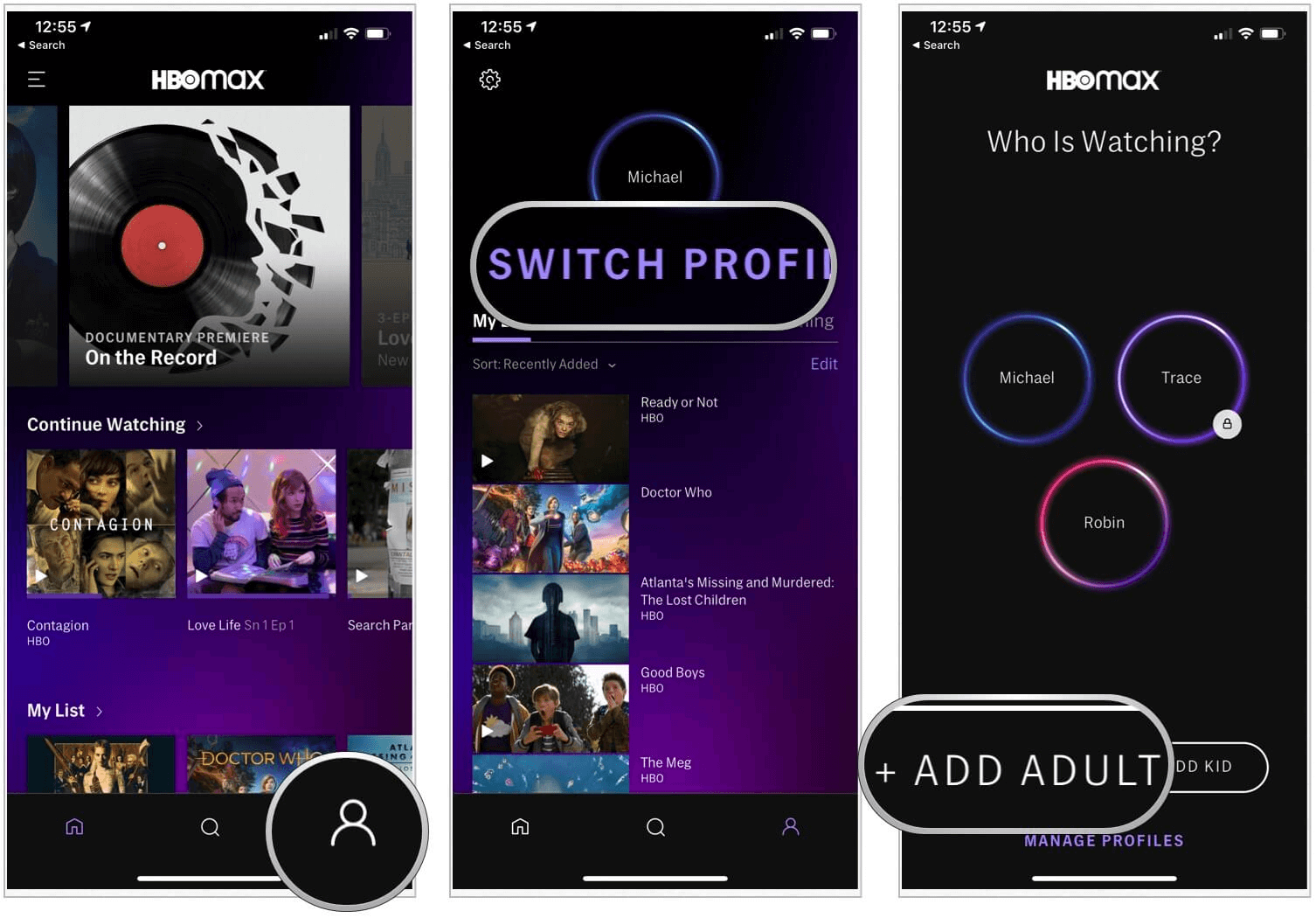 To create a kid profile: 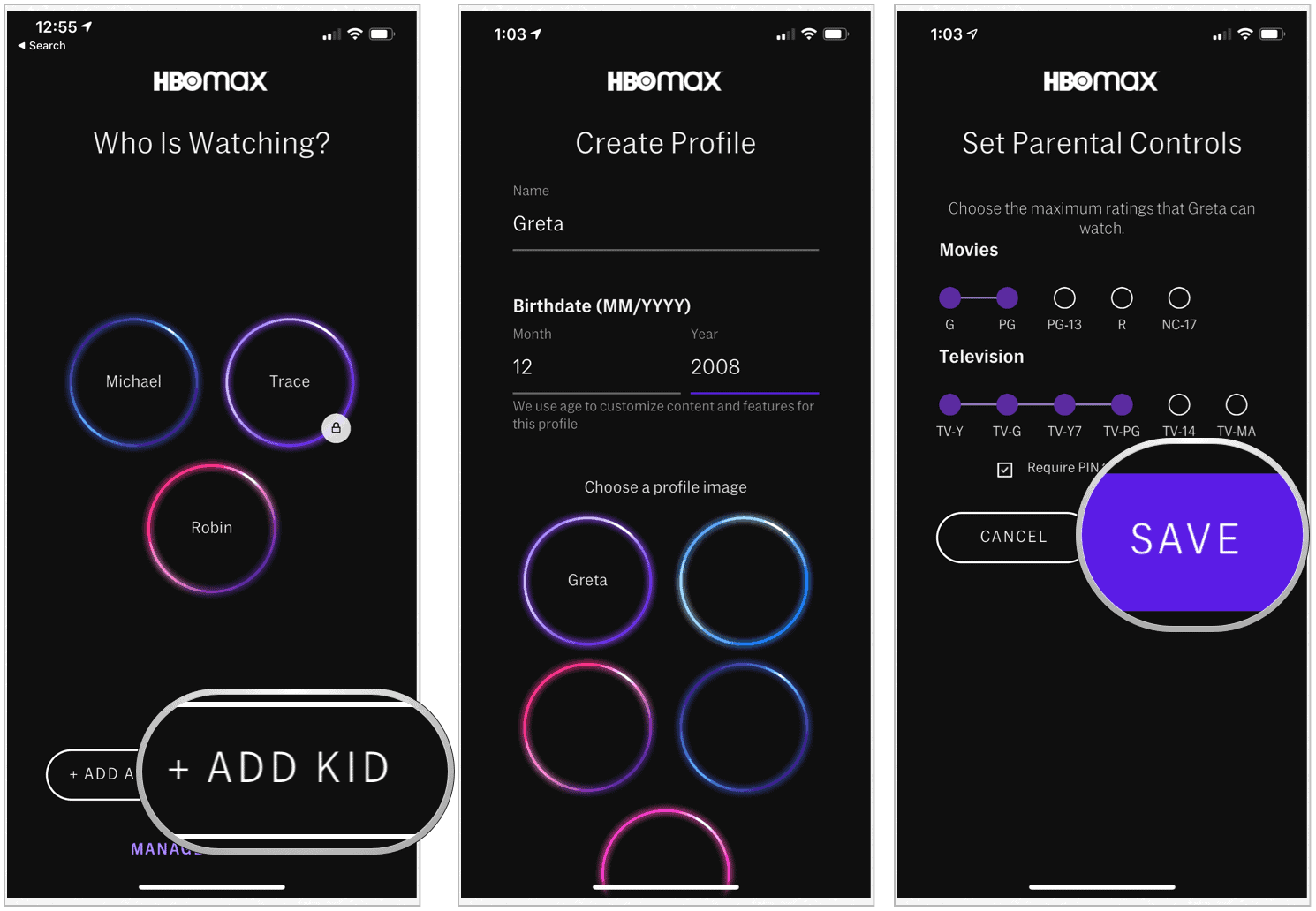 By default, kids can’t change to an adult account. They also can’t change their movies and television ratings. You can create up to five user profiles per account, each with recommendations and watchlists.

HBO Max is divided into various sections to highlight its broad content library. Beyond this, content gets organized by type (series, movies, originals, etc.) and category (action, comedy, and many more). You’ll also find nine hubs which break the content down by content provider.

Exclusive content, under the Max Originals banner, includes series, films, and specials. Unlike Netflix, HBO Max series won’t be dropped in a “binge” format. Instead, episodes will be released weekly like they are on more traditional TV channels.

The HBO hubs, many familiar, are HBO, DC, Sesame Workshop, Classics Curated by TCM, Studio Ghibli, Cartoon Network Collection, Adult Swim Collection, Crunchyroll Collection, and Looney Tunes. You’ll see links to these hubs as a row on the HBO Max home screen or at the bottom of the browse menu, depending on your device. 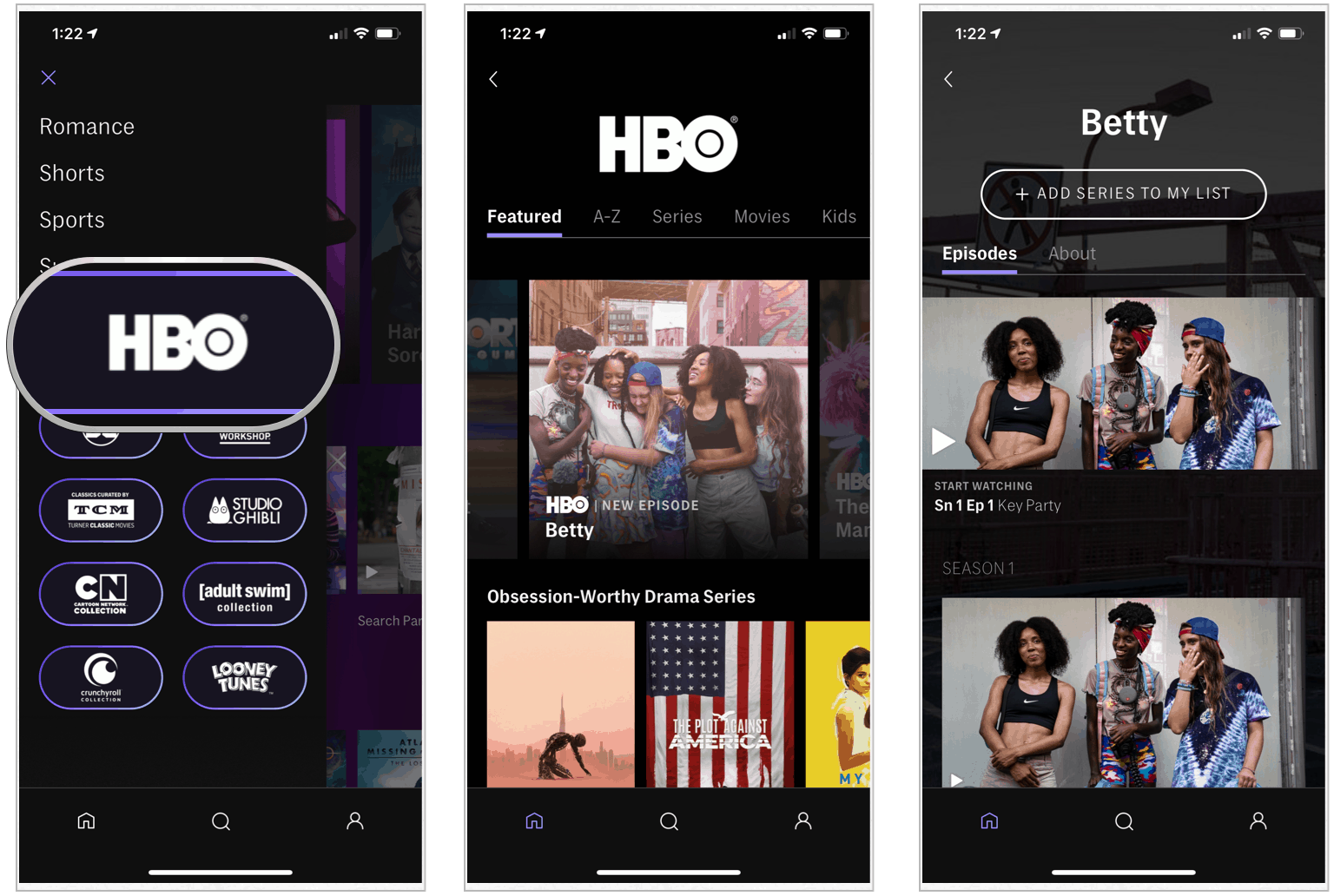 Your first introduction to HBO Max will be from the home page. Here, you’ll find links to featured content and your Continue Watching and My List. The home page also includes a listing of featured series and movies. Beyond this, a combination of algorithms and human curation decides which recommended titles show up on your home screen. For example, if much of your HBO Max viewing comes from animated content, your home page will reflect that moving forward.

HBO Max keeps track of the content you watch and uses this information to keep you up-to-date across all of your devices.  In other words, you can begin watching episode 2 of HBO’s Betty on your iPhone, then finish it later on the HBO Max app on your television. As you’re looking for new content to watch, it’s a good idea to create a wish list.

To add a movie or episode to My List:

Shows and movies will stay on My List until you remove them, or they’re no longer available through the service. You can remove content on your list at any time using the available option.

Like with other video streaming services, HBO Max allows you to download content for offline viewing on mobile devices. To do so, your device must be connected to a Wi-Fi connection unless you change the setting to include cellular as well.

To make a change: 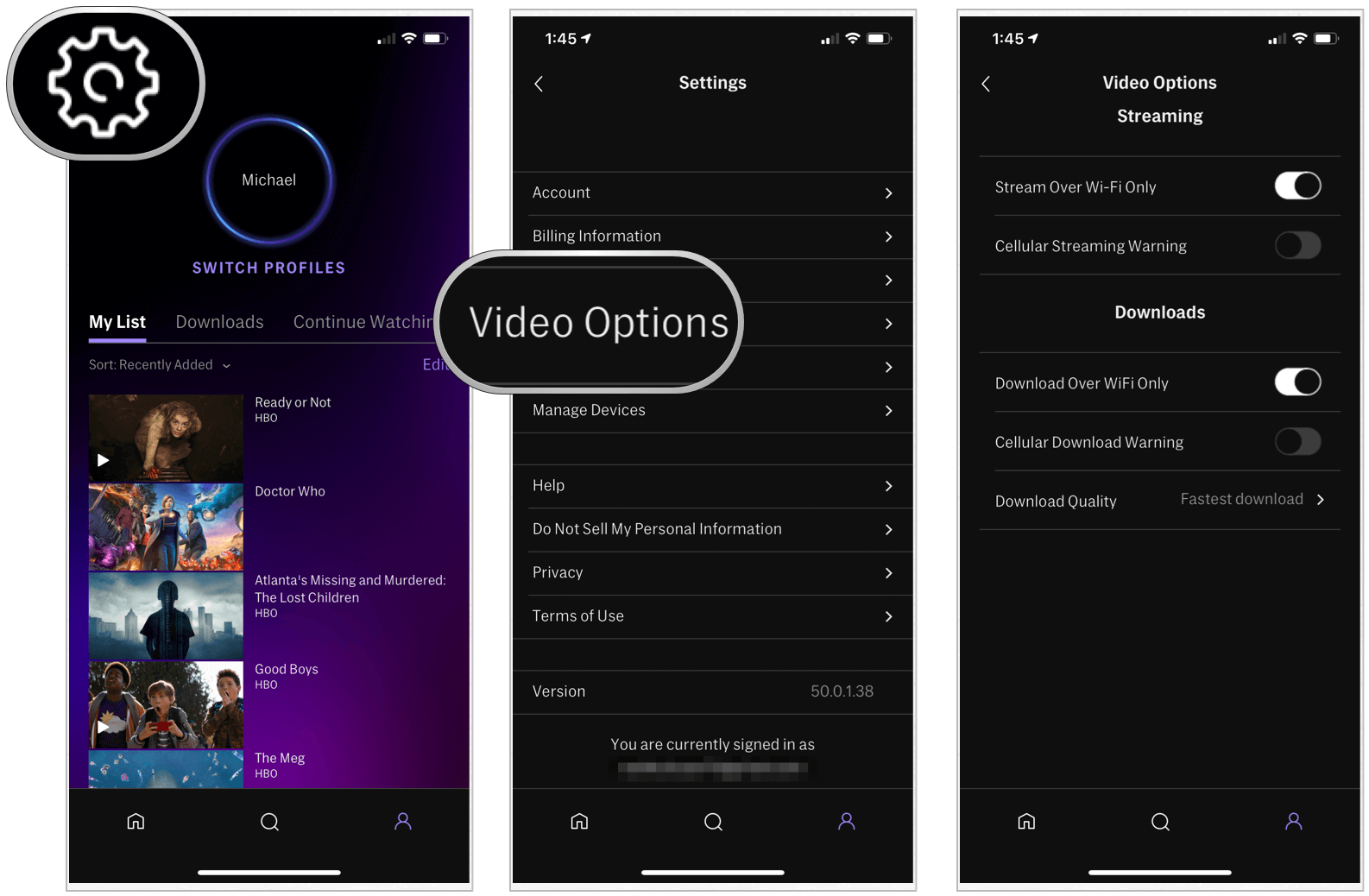 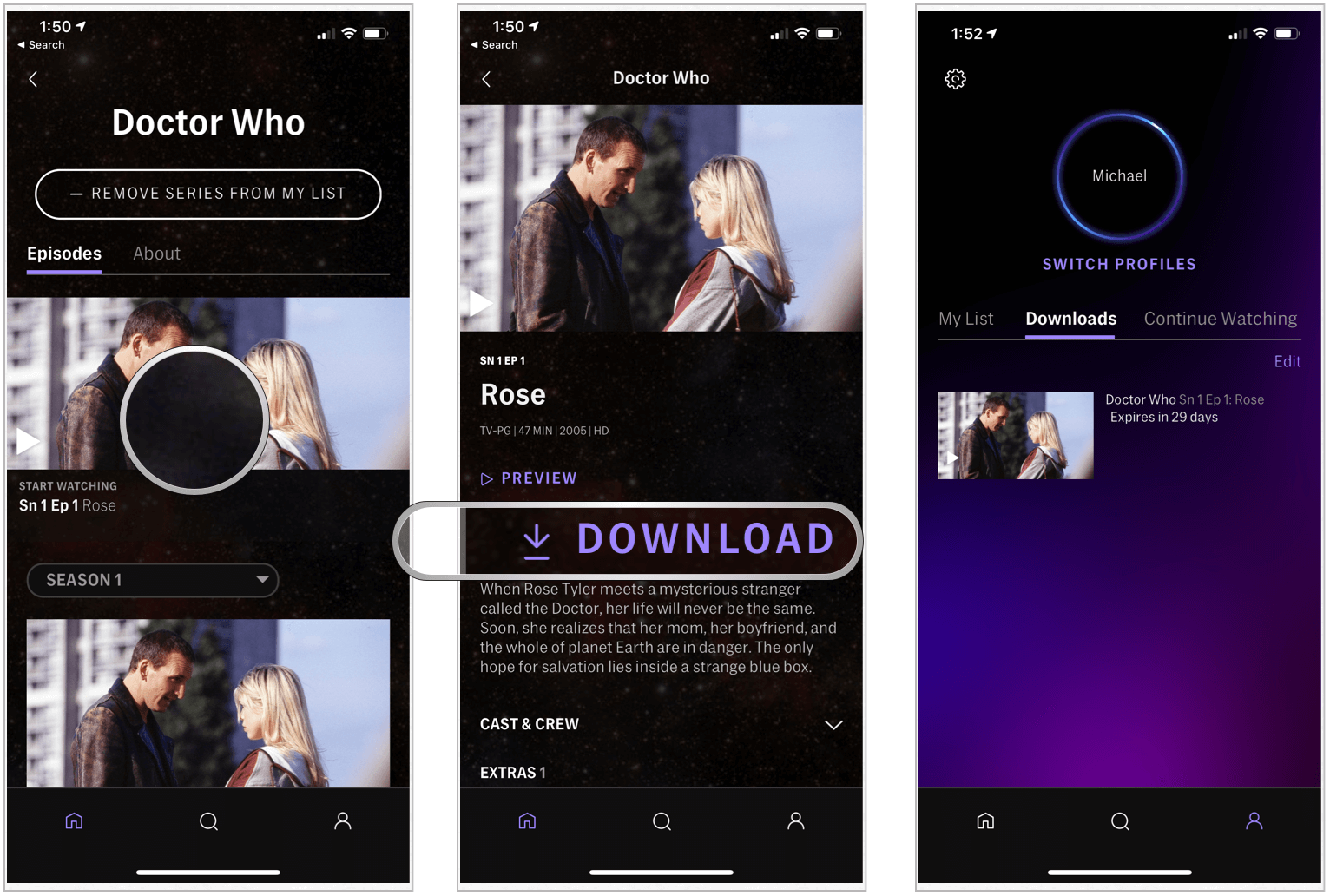 You can have up to 30 downloads available across all profiles and devices. The unwatched downloads are available for 30 days or 48 hours, depending on the content. If the content is no longer available on HBO Max, it’s automatically removed from your downloads list.

Ultimately, the best way to experience HBO Max is to get started yourself. These are early days for the service, and no doubt some users will find the occasional hiccup or have a complaint. In my limited time using the service, I’ve identified a few things worth noting.

WarnerMedia is a large company with various entertainment units, much of which are mentioned above. Despite this, don’t expect everything from the vast WarnerMedia library to show up immediately on HBO Max. In particular, its DC content is lacking, and I have found some older HBO content missing on day one. Expect most of the holes to get filled over time as licensing agreements change. Also, keep an eye on the Just Added, Last Change, and Coming Soon sections in HBO Max.

HBO Max doesn’t come with 4K content at launch, which is a shame, but not unexpected. HBO Now didn’t have 4K either. For now, content is limited to 1080p streaming. Also missing is support for HDR and Dolby Atmos.

Finally, let’s talk about the price. Compared to Disney+, HBO Max is expensive. However, it’s better to compare HBO Max to other HBO packages.

HBO Now and a single HBO subscription was also priced at $15 per month or very close to it. In other words, for most of the millions of long-time HBO customers, the arrival of HBO Max means more content without a price hike.

For newbies, it’s best to try the service free for seven days and then decide whether it’s worth the price of admission in your household. Regardless, you can cancel the service at any time.

HBO Max probably represents the arrival of the last of the big streaming video services that call the United States home. With thousands of hours of content already available for kids and adults alike, HBO Max is set to make a mark. How big an influence will it become remains to be seen.