Early this spring Google briefly announced an exciting creation was in the works, Google TV.  Since then they’ve been making some real progress and this week they just set up their new website, blog, and a sneak preview video of the service.  Today, they are releasing the first of the devices that will let your TV connect to the service.

New Site With A Groovy Logo

First on the list is their new website, google.com/tv.  The site is stylish and goes in-depth talking about all of the features and programs of the new service.  Aside from that, Google has paired up with some big names in television broadcasting such as TNT, TBS, Cartoon Network, NBC, CNN, NBA, and HBO to offer on-demand shows.  Wow, that was a lot of acronyms.

There are really way too many features to talk about them all but the first one that really stood out to me was something quite innovative.  Google is launching an App for both iPhone and Android that will turn your smartphone into a Google TV remote control.  While it’s not really an invention, it’s the best thing brought into the world since sliced bread, or even Bacconaise.  No more losing the remote in the couch cushions, it’s on your phone! 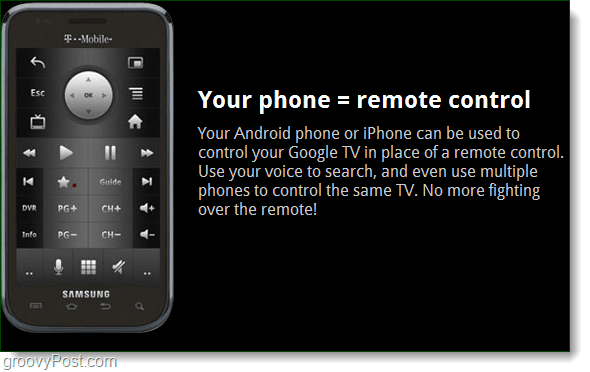 If you want to follow Google TV news, Google has launched their new Google TV Blog on blogspot.  I expect it will show up on theGoogleOS Google News aggregator soon enough.  The blog only has one post so far, but you can subscribe to its RSS to stay up to date with all of their team announcements.

To go with the launch of the site and blog, they’ve also released a new video outlining how Android Apps will work with Google TV.  Here’s the sneak peek:

This all sounds really groovy, but what does it take to get all of this?  Or in other words…

What Do I Need To Use Google TV?

Don’t worry, you won’t need to buy a new TV.  But, if you are in the market for one Samsung has developed a line of “smart TVs” that have built-in hardware capable of supporting the Google TV platform.  Don’t expect those things to be cheap!

Most people will opt to get the Logitech Revue box, designed specifically for Google TV.  The box will connect to your TV via an HDMI port and only requires power and an internet connection to function.  We believe at this time it will work over WiFi.  The rumors on pricing say that it is going to cost a small chunk of change at around $200-$300.

The devices haven’t gone on sale yet, the Logitech revue box is scheduled to launch today (10/6/2010) at 3pm EST.  Samsung’s InternetTV series is scheduled for launch on October 12, 2010.

Is This The End Of Cable TV Subscriptions?

Not quite yet, to access the normal “cable television” channels you will still need a cable/satellite connection hooked up to your Google TV box.  But it is a start, with just an internet connection you will still have access to Hulu, YouTube, and all other online broadcasting.  Google has also said that the service is free AND will be ad-free for the first year, though I’m really curious to see how they will implement ads after that year is up. Now that Google TV is on the market, cable television connections’ days are certainly numbered.

What do you think about Google TV?  Do you watch Television or do you stream all of your shows and movies from the internet?  Let us know in the comments below.