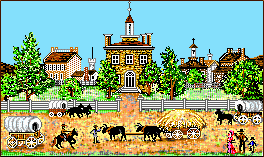 In elementary school we had a computer lab, but despite the public school system’s best attempts at teaching us programming, it was always more fun to play the Oregon Trail.  The best part was that since the game taught us some good ole fashioned American history, our teachers thought it was a totally groovy win-win scenario.  The new Digg designers were no exception to this, and they’ve brought the nostalgic Ox cart from the trail right to the front of Digg.

Was it inspiration from Twitters trendy fail whale?  Apparently Twitters success despite its many, many, many technical difficulties has led to a new hip error 404 page.  Remember when we talked about the new and upcoming Digg?  It’s live, and here is the new fail ox which accompanies the new design. 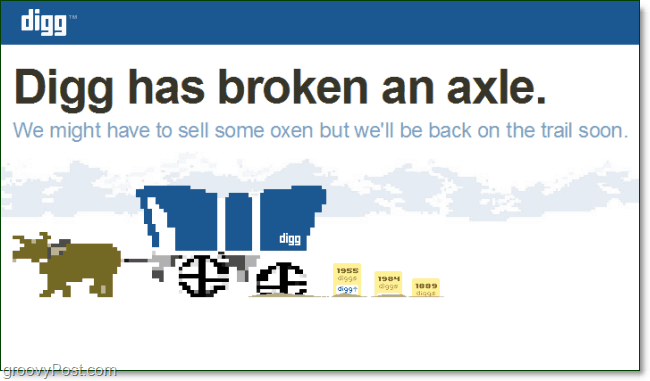 Unfortunately, the Ox-cart isn’t the only thing that is failing around Digg these days.  The new Digg dubbed “V4” or “version 4” has some serious bugs, and the Digg user-base is taking up some big issues with it.

Currently one of the most popular submissions on Digg is a screenshot of a user comment, titled Dear Kevin Rose 2.  As of the time of writing this the submission has over 1,480 Diggs, however it has yet to reach the front page.  Why?  Perhaps Digg is censoring it from reaching the front. Regardless, the user who commented accurately outlined nearly every problem with the new Digg and it’s quite apparent that many people agree.

Digg is currently in a an all-out riot.  Many users have pledged to switch to the rival site Reddit.com, while others are continuously protesting the new changes.  Digg founder, Kevin Rose, has made a blog post on his personal site in response to the uprising but it doesn’t appear even he can calm people down.  At this point it is hard to say what Digg will look like in the future, or even the next few days…

Back to the trail

To go along with Digg’s Oregon Trail theme grooveDexter whipped up a quick screenshot of the game, Digg v4 launch edition.  Enjoy! 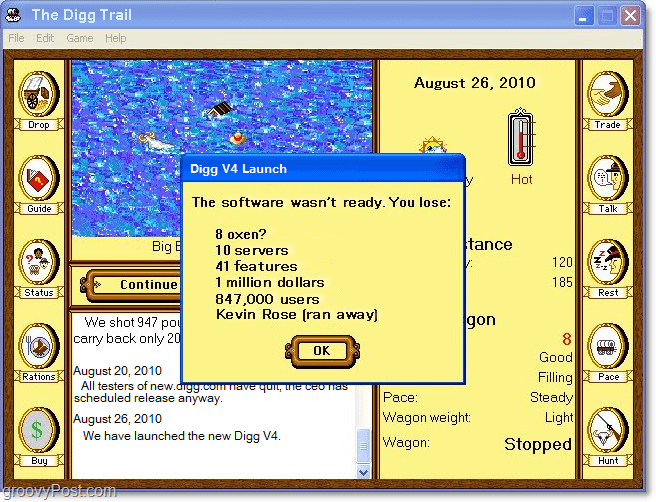 Here is the excerpt from the now infamous post by Jordan117 on things wrong with the new Digg.

How does the new Digg suck? Let me count the ways:
The Upcoming section is gone, requiring “following” of sites and users to see un-promoted content.
Mainstream media outlets and power users have been given even more power over the front page than regular users, which is the opposite of what needed to happen.
The default homepage is now this “My News” garbage, and cannot be changed.
All your favorites have been deleted.
Comments from you and your friends automatically pre-empt the main discussion.
The yellow/green highlighting of your and your friends’ comments is gone.
You can’t view all comments at once. If there are hundreds, you can’t view all of them, period.
The comment box is three lines high, not resizable, and types out light blue text on white.
Links to comments point the wrong way, and use longer, more confusing URLs.
Timestamps have been removed from the main page and all search results.
The bury button is gone.
The report button is gone.
Historical submissions, like the Obama victory thread, the original iPhone announcement, the HD-DVD key scandal, etc., have had their digg counts reset and their comment sections mangled.
The color scheme has changed, junking the site’s characteristic blue/yellow/green navigation bar for almost pure white.
The iconic thumbs up/down have been replaced with generic arrows.
Browsing a user’s comment history, including your own, is frustratingly hard.
All usernames are now lower-case (except for mine, and only because I contacted support about it).
The RSS feeds no longer work.
All third-party tools that used the old Digg API are now broken.
They are filtering the anti-new Digg posts
Feel free to add your own and repost.