Wait! Just because the plug for that universal adapter fits into your laptop or phone doesn’t mean it’s safe to use. Read this guide on finding the right charger or power adapter.

The other weekend, I sat down and sorted through all my random electronics junk. As part of that process, I took all my power supplies and adapters and threw them into a box. It ended up being a pretty big box. I’m willing to bet that any given household has a dozen or more different types of cell phone chargers, AC/DC adapters, power bricks, power cables, and charger plugs. 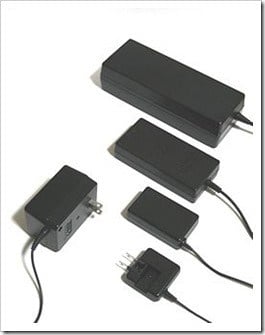 Having so many chargers can be pretty frustrating. It’s easy to get them separated from the phone or laptop or tablet, or router. And once that happens, it can be complicated to figure out which goes with which. The default solution is to try random plugs until you find one that fits into your device. However, this is a big gamble. If you grab an incompatible power adapter, your best case scenario is that it works, albeit not the way the manufacturer intended. The second worst-case scenario is that you fry the gadget you are trying to power up. The worst-case scenario is that you burn down your house.

In this article, I’m going to walk you through the process of digging through your junk drawer and finding the right power adapter for your device. Then, I’ll tell you why it’s so important to do so.

Each AC/DC power adapter is specifically designed to accept a certain AC input (usually the standard output from a 120 V AC outlet in your home) and convert it to a particular DC output. Likewise, each electronic device is specifically designed to accept a certain DC input. The key is to match the DC output of the adapter to the DC input of your device. Determining the outputs and inputs of your adapters and devices is the hard part.

The most important details for you and your delicate electronics are the voltage and the current. Voltage is measured in volts (V), and current is measured in amps (A).  (You’ve probably also heard about resistance (Ω), but this doesn’t usually show up on power adapters.) 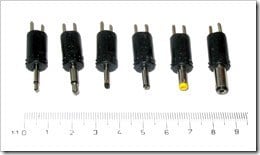 To understand what these three terms mean, it helps to think of electricity as water flowing through a pipe. In this analogy, the voltage would be the water pressure. Current, as the term implies, refers to the flow rate. And resistance relates to the size of the pipe. Tweaking any of these three variables increases or decreases the amount of electrical power sent to your device. It’s important because too little power means your device won’t charge or operate correctly. Too much power generates excess heat, which is the bane of sensitive electronics.

The other important term to know is polarity. There is a positive pole (+) and a negative pole (-). For an adapter to work, the positive plug must mate with a negative receptacle or vice versa. By nature, direct current is a one-way street, and things won’t work if you try to go up the downspout.

If you multiply the voltage by the current, you get the wattage. But the number of watts alone won’t tell you if the adapter is right for your device. 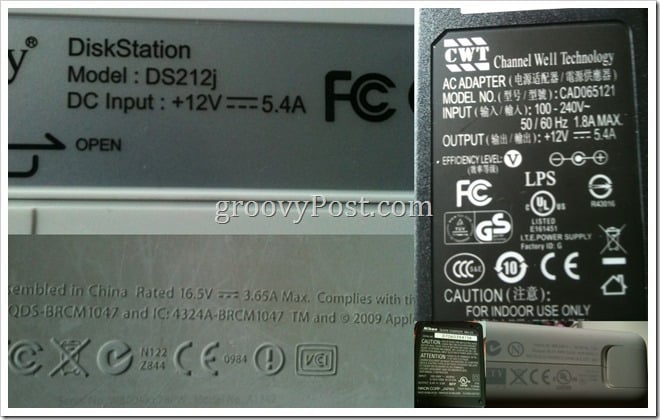 If the manufacturer was smart enough (or compelled by law) to include the DC output on the label, you are in luck. Look at the “brick” part of the adapter for the word OUTPUT. Here, you’ll see the volts followed by the direct current symbol and then the current.

To check the polarity, look for a + or – sign next to the voltage. Or, look for a diagram showing the polarity. It will usually consist of three circles, with a plus or minus on either side and a solid circle or C in the middle. If the + sign is on the right, then the adapter has positive polarity:

If there is a – sign on the right, then it has negative polarity:

Next, you want to look at your device for the DC input. You’ll usually see at least the voltage near the DC plug receptacle. But you also want to make sure the current matches, too.

You might find both the voltage and the current elsewhere on the device, on the bottom or inside a battery compartment cover, or in the manual. Again, look for the polarity by either noting a + or – symbol or the polarity diagram.

Fudging It: What Happens if You Use the Wrong Adapter? 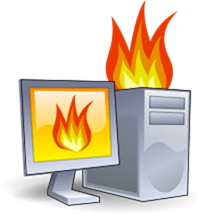 Ideally, you’ll have the same voltage, current, and polarity on your adapter and device.

But what if you accidentally (or purposefully) use the wrong adapter? In some cases, the plug won’t fit. But there are many instances where an incompatible power adapter will plug into your device. Here’s what you can expect in each scenario:

You would expect to see all of the above based on a simple understanding of polarity, voltage, and current. What these outlooks don’t take into account is the various protections and versatility of adapters and devices. Manufacturers may also build a bit of a cushion into their ratings. For example, your laptop may be rated for an 8A draw, but in reality, it only draws around 5A. Conversely, an adapter may be rated at 5A, but can withstand currents up to 8A. Also, some adapters and devices will have voltage and current switching or detecting features that will adjust the output/draw depending on what’s needed. And, as mentioned above, many devices will automatically shut down before it causes damage.

That being said, I don’t recommend fudging the margin under the assumption that you can do the equivalent of driving 5 MPH over the speed limit with your electronic devices. The margin is there for a reason, and the more complicated the device, the more potential for something to go wrong.

Have any cautionary tales about using the wrong AC/DC adapter? Warn us in the comments! 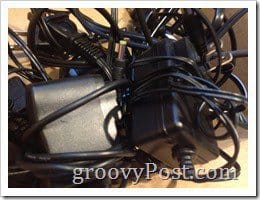 P.S. Wall adapters that give you a USB port for charging aren’t nearly as tricky. Standard USB devices have a 5 V dc voltage and a current up to .5 A or 500 mA for charging only. This is what allows them to play nice with the USB ports on your computer. Most USB wall adapters will be 5 V adapters and have a current rating well over .5 A. The iPhone USB wall adapter I’m holding in my hand right now is 5 V / 1 A. You also don’t have to worry about polarity with USB. A USB plug is a USB plug, and all you usually have to worry about is a form factor (e.g., micro, mini, or standard). Furthermore, USB devices are smart enough to shut things down if something isn’t right. Hence, the oft-encountered “Charging is not supported with this accessory” message.