If you aren’t a fan of using WiFi to send video to your HDTV from Android devices, you can get quality connections with HDMI-Out, and cables are cheap.

One of the things I like about the Kindle Fire HD is its HDMI out port. Plenty of other Android tablets and phones also have this. However, unlike the HDMI port you typically find on a television or computer monitor, the HDMI out on these mobile devices is a lot smaller. It’s known as HDMI-mini, and to use it, all we have to do is get a cable that fits.

HDMI Out Cables are Cheap and Easy

When it comes to using the HDMI-out on your Android device, there are two options. The first is to pick up an HDMI-mini cable with one end that will fit into the television while the other will fit into the mobile device. The second option is to use a standard HDMI cable and use an adapter so that one end will fit. Cables usually run sub $10 (depending on length), and the adapters are often less than $5.

Plus, these cables are ready to support the new 4K resolution standard.

Once you have the cable, plug it into the HDMI out slot on the device and plug the other end into the television. The picture should show up on both, and you can still use the Android to control what’s being displayed. In the Kindle Fire HD case, this is great because it includes Amazon’s Prime Instant Video streaming. Still, you can just as easily use Netflix, Google Play, Hulu, or other streaming services that work on anything running Android. 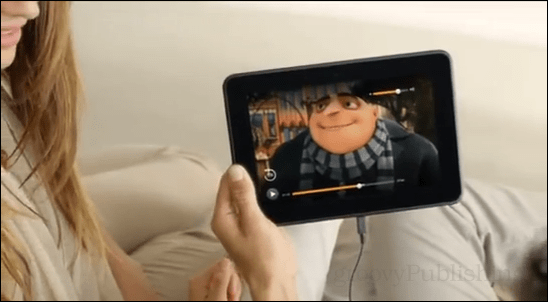 That’s all there is to it, really. If you have an Android tablet lying around, why not plug it into an HDMI cord and use it for streaming media? Just be sure to check your device specifications to see if it can output video in 1080p because otherwise, your picture quality will be subpar.