Inking has been a feature in Office as far back as version 2002 but rarely used. Now with more tablet-type devices like Surface, it’s worth checking out.

Inking has been a part of the Microsoft Office as far back as version 2002. In Microsoft Word, inking is fast, smooth, and powerful. Here’s how to get started with this handy feature.

Many years ago, I scanned my signature for use in digital documents, but I always wanted to be able to sign a document on the fly. The capability existed for many years; I just never saw the value of owning a tablet to enter my signature. In late 2015 I became the owner of a Microsoft Surface Pro; little did I know how much I would underestimate the Surface Pen as part of the user experience.

To enable inking, hover the Surface Pen or similar stylus anywhere in the tab region of a document. The inking context tab will open and provide various tools you can use to accomplish various tasks.

The Pens group provides a collection of colors, styles, and functions to choose from. 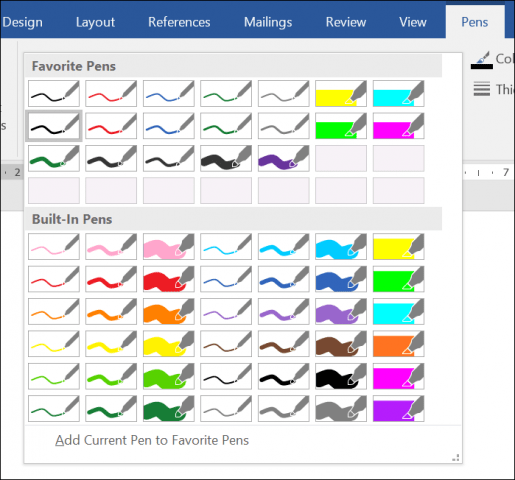 After selecting a color and size, just starting writing anywhere in the document as you normally would on a physical sheet of paper. 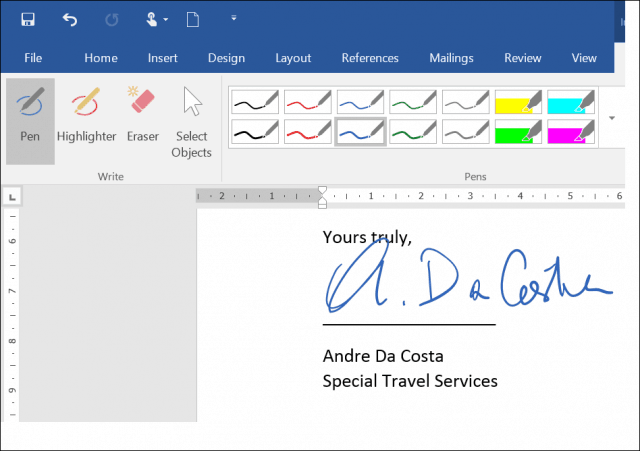 If you want to erase a mistake, activate the Eraser, then rub out any markings in the document. 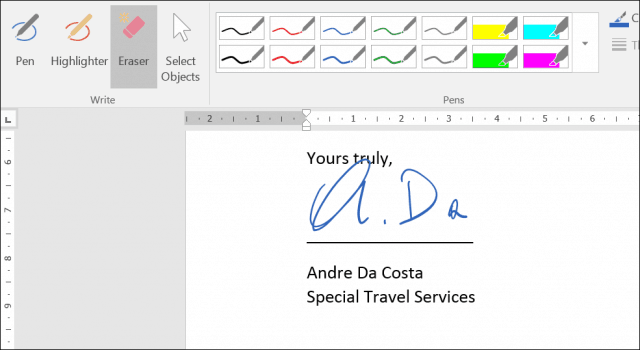 The Surface Pen supports the selection of objects, too. After selecting one, you can use it to resize and modify items in your document. 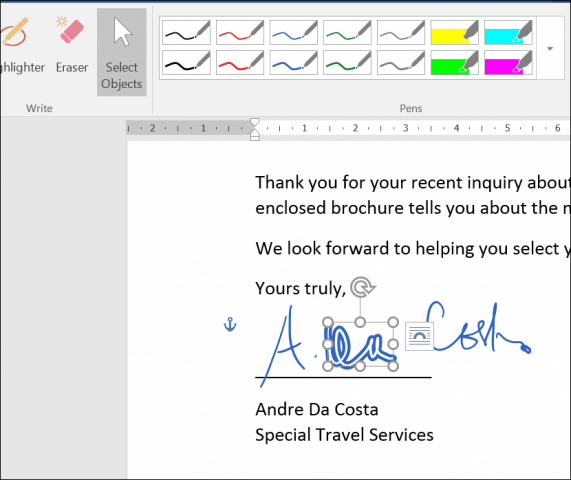 Inking in Word also supports entering mathematical formulas. If you prefer writing instead of typing, you can activate the touch keyboard and enter text using the pen. If you annotate documents a lot, the inking tools in Word make it easy to highlight text. When you are done using Ink, select the Stop Inking button on the Ribbon.

Word 2016 and the Surface Pro Pen provide a powerful experience when preparing documents. When combined with capabilities such as saving as PDF, there is less of a need to print and sign documents anymore. If you consider a Surface Pro or any convertible tablet device running Windows 10, this is a key feature that will make your daily workflow easier.

What’s your take? Do you have a Surface or other touchscreen device and used the inking feature? Let us know in the comment section below.