The Clear Web, sometimes called Clearnet or Surface Web, is the publicly accessible internet. Here’s how it differs from the dark and deep web.

The internet takes many forms, including the Clear, Dark, and Deep Web. The Clear Web, which you’ll learn more about here, is the most popular of the three. It’s also the one you probably use each day. Here’s a look.

A Review: Dark and Deep Web

As previously noted, the Deep Web can include webmail, online banking, social media pages and profiles, web forums, and anything else that is private from the public. It can also feature anything behind a paywall, like an online newspaper or magazine. Accessing deep web content requires entering a password or another type of security access. These can include fingerprints, retina scans, or other requirements.

Think of the deep web content as anything hidden behind the HTTP forms found across the web. These can include webmail, online banking, social media pages and profiles, web forums, and anything private from the public. It can also feature anything behind a paywall, such as an online newspaper or magazine.

Like other web content, the information found on the deep web is accessible through a web address. However, accessing this content usually requires entering a password or another type of security access, such as a fingerprint or retina scan, depending on the requirements.

Besides the invisible web or deep web, you might also hear the term hidden web to describe the same information.

The kind of information you can find on the dark web isn’t for the faint of heart. It can include illegal activities such as media exchange for pedophiles and terrorists; the selling and buying drugs; and software exploits also highlight the dark web. Content here typically falls in one of a handful of categories, none of them good. On the bad side of the Dark Web, you’ll find computer exploits, illegal file sharing, and the selling of illicit goods and services,

The Dark Web isn’t all wicked. However, the degree to which some of its better uses are good largely depends on where you’re located. These uses include protecting political dissidents, providing an off-the-grid forum for whistleblowers and news leakers, and opportunities for users to circumvent network censorship and bypass governmental firewalls. Parts of the dark web can also provide privacy for citizens in countries where targeted and mass surveillance is plentiful.

To access the Dark Web, you need to use networks like Tor (called “The Onion Routing” project) and I2P (“Invisible Internet Project”). The former typically includes content identified by the “.onion” domain, although you can’t access these pages through a commercial browser like Microsoft Edge or Google Chrome. Tor provides anonymous access to the internet, while I2P offers anonymous hosting of websites. Together, they have created a faceless system with multiple layers of encryption provided by intermediate servers spread throughout the world. These servers make it impossible for websites to track geolocation and the IP of their users. The combination means users can ultimately talk, blog, and share files confidentially.

What About the Clear Web? 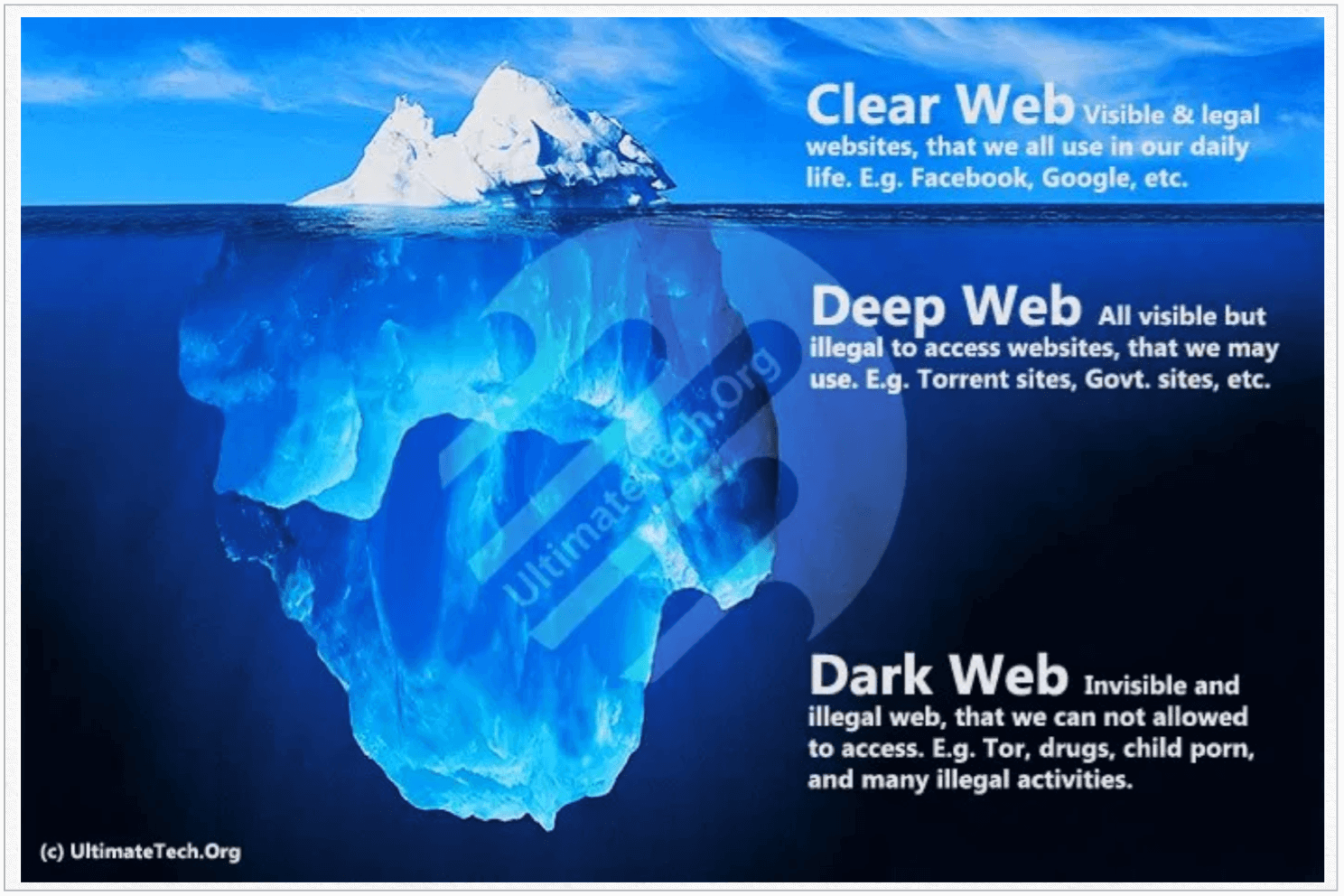 The Clear Web, sometimes called Clearnet or Surface Web, is the publicly accessible internet. You’re reading this article on the Clear Web, which is composed of web pages and databases, all indexed by traditional search engines (Bing, Google, and Yahoo). The Clearnet is primarily made up of hyperlinks that will take you to other Clearnet pages or provide access to the Deep Web via some authentication.

For example, your bank’s website includes information that’s easily accessible to anyone with an internet connection. From the main website, customers and visitors can access information on credit cards, banking and investment accounts, loans, and much more. To access your banking information, however, requires logging into your account. Once you do, you’ve entered a part of the Deep Web.

According to WhoIsHostingThis, the Clear Web makes up just four percent of the total web. Because it’s public, the Clear Web is always being monitored by the government and indexed by search engines. By contrast, the Deep Web is 500 times the size of the Clear Web.

The web is made up of different areas, including the Clear, Dark, and Deep Web. Though the Clear Web consists of some of the most popular websites globally, it’s also the smallest part of the web. Like an iceberg (as shown above), the Deep Web is the biggest part of the overall web, for which the Dark Web is a small part.