Microsoft and Amazon form partnership in the battle of digital assistants. Learn more about the new collaborative opportunities for Alexa and Cortana.

The artificial intelligence race just got interesting—two of the technology industry’s well-known digital assistants, Cortana and Amazon’s Alexa have formed an unexpected friendship and partnership. Both are based in Washington state, so we shouldn’t be surprised. But what does this new partnership hope to achieve?

Both Microsoft and Amazon are expected to deliver integration between their respective digital assistants Cortana and Alexa later this year. Alexa will be available within Cortana on Windows 10, allowing users to call up and make requests, set reminders, calendar management powered by Office 365 and of course tap in Amazon’s extensive collection of items.

In return, Cortana will be available on Amazon’s own Alexa branded devices such as the Echo, Dot, and Show. Some of the immediate benefits include accessing books, creating shopping lists and the ability to order items. Here is what Microsoft had to say about today’s announcement:

Available later this year, this collaboration will allow you to access Alexa via Cortana on Windows 10 PCs, followed by Android and iOS in the future. Conversely, you’ll be able to access Cortana on Alexa-enabled devices like the Amazon Echo, Echo Dot and Echo Show.

As our CEO, Satya Nadella, said in today’s Amazon press release, the collaboration between Microsoft and Amazon reflects our belief that when people and technology work together, everybody wins:

“Ensuring Cortana is available for our customers everywhere and across any device is a key priority for us. Bringing Cortana’s knowledge, Office 365 integration, commitments and reminders to Alexa is a great step toward that goal.” Source 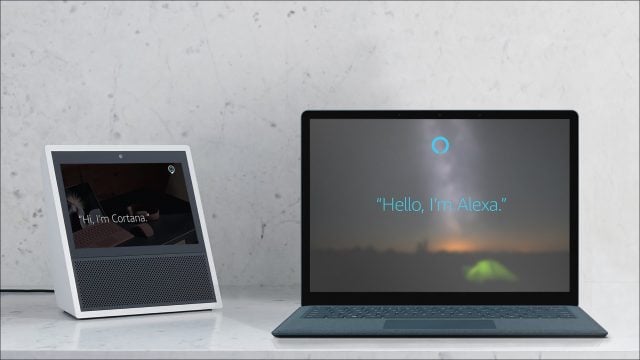 So how will this work exactly? It’s really simple, just launch either assistant then say ‘Hey Cortana, open Alexa’. This will then open a world of new opportunities to your preferred assistant. For one, you no longer have to choose between a Cortana speaker or an Alexa device. And you may even be able to look forward to Skype on an Echo or Kindle and Audible books on a Cortana device.

It’s interesting to note, support is not limited to just Windows 10 and Amazon Alexa devices. If you currently use an Android or iOS device, you will be able to access these services, too.

Taking into consideration that Apple does not permit third party digital assistants to be commanded by voice; you will likely need to use Siri to open either Cortana or Alexa first before you can send commands. This certainly will put some heat on Apple’s own digital assistant, Siri; Apple is developing a dedicated device called HomePod for winter 2017. Google, with its Google Home smart speaker, remains a leader in the pack, but this will certainly give Cortana a leg up in a crowded field.