Your USB technology is continuing to evolve. Coming soon is USB4 which is based on the Thunderbolt 3 protocol specification. Here’s what you need to know.

Technology standards evolve with time. When it comes to USB, change is in the air with the introduction to USB4, released in August by the USB Promoter Group. Here’s what this means for you.

The Universal Serial Bus (USB) is an industry standard that establishes specifications for cables and connectors. It establishes protocols for connection, communication, and power supply between computers and peripherals and computers with other computers. USB4, as its name suggests, is the fourth generation of USB specifications, following USB 1.x, USB 2.0, and USB 3.x. And yes, it’s written as USB4, not USB 4 or USB 4.x.

USB4 is based on the Thunderbolt 3 protocol specification, which provides three main benefits over previous USB versions. This includes:

What About the Connectors?

USB4 uses USB Type-C connectors, not the older USB Type-A variety. However, you can still connect older devices with USB Type-A or Type-B connectors to newer devices that use USB4 using a dongle. The use of the USB Type-C shouldn’t come as a surprise since USB Power Delivery only works with Type-C. 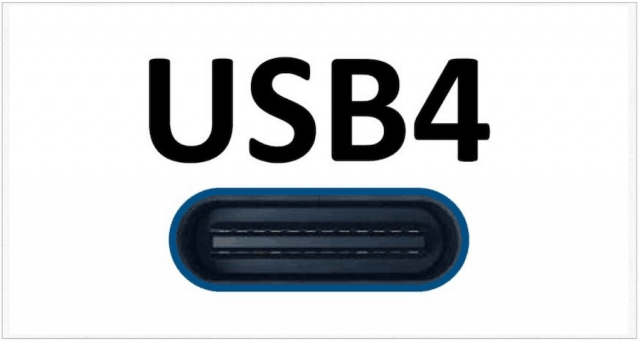 Although dongles can connect new and old connectors, the speed and power will drop down to the lowest common denominator. For example, a USB4 device can’t transfer at 40 Gbps when you hook it to a USB 3.x or USB 2.0 port. Instead, you’ll see the speed and other capabilities drop to the weakest part of the connection.

USB4 architecture is based on the Thunderbolt protocol specification. Developed by Intel (with the assistance of Apple), Thunderbolt is a hardware interface announced in 2011. The first two versions of Thunderbolt used the same connector as Mini DisplayPort, or MDP, Thunderbolt 3 using the USB-C connector.

According to Pocket-lint, there are currently over 400 PCs on the market that use Thunderbolt 3 and an additional 450 peripherals that support it. Up until this point, however, there has been great confusion on whether a device’s USB-C Port was also a Thunderbolt port or a standard USB 3.x port.

In March, however, Intel announced it would make Thunderbolt 3 available to everyone. Intel’s decision means device makers are now able to make Thunderbolt devices without paying royalties in strictly financial terms. Because of this, there’s going to be an eventual convergence between the Thunderbolt and USB protocols, thereby increasing compatibility among USB Type-C connector-based products.

Releasing the Thunderbolt protocol specification is a significant milestone for making today’s simplest and most versatile port available to everyone. This, in combination with the integration of Thunderbolt 3 into upcoming Intel processors is a win-win for the industry and consumers.

What does this mean? As Pocket-lint rightfully concludes, “Thunderbolt will basically underpin USB 4.0, so all USB 4.0 devices and ports will be automatically compatible with Thunderbolt devices for super-fast data transfer as well as device charging and display across a single cable as now.”

Better resource allocation for video is perhaps the strongest point to consider when it comes to USB4. Under the new protocol, video only takes the necessary resources while leaving the rest for data management. In this case, both data and video can share a maximum speed of 40 Gbps. The USB 3.2 Gen 2×2 standard is only 20 Gbps.

When Will USB4 Arrive?

New devices using USB4 should arrive in stores in late 2020 or early 2021. It usually takes around 18 months when a new standard is released before it begins getting implemented. The biggest names in tech helped create the standard, especially those behind the so-called USB Promoter Group. These include Intel, Apple, HP, Microsoft, and many others. The standard, at last count, is supported by over 50 companies.

It will be interesting to see where USB4 goes from here. The powers to be, at least on the surface, look committed to using one central standard moving forward. Brad Saunders, USB Promoter Group Chairman, concludes:

The primary goal of USB is to deliver the best user experience combining data, display and power delivery over a user-friendly and robust cable and connector solution. The USB4 solution specifically tailors bus operation to further enhance this experience by optimizing the blend of data and display over a single connection and enabling the further doubling of performance.