Rakuten offers cashback bonuses from over 2,500 retailers, including big companies like Amazon, Macy’s, Nike, and more.

Shopping is always better when you can score a discount. With a free Rakuten account, you can also earn cashback on products you were probably already going to buy. Here’s a look at the Rakuten Cash Back program and why it’s a great thing to use when shopping both online and in stores.

Rakuten is Japan’s largest e-commerce retailer. In 2010, it entered the U.S. market by purchasing Buy.com. Three years later, Buy.com became Rakuten.com. It was Rakuten’s 2014 purchase of Ebates.com that increasingly put the Rakuten name on the map.

Ebates, founded in 1998 in Menlo Park, California, was a cash-back and shopping rewards company that relied on affiliate links to make money. Rakuten purchased it for $1 billion. It wasn’t until early 2019 that Ebates became Rakuten Rewards in the United States. In Canada, the service is still called Ebates.

Signing Up for Rakuten Rewards 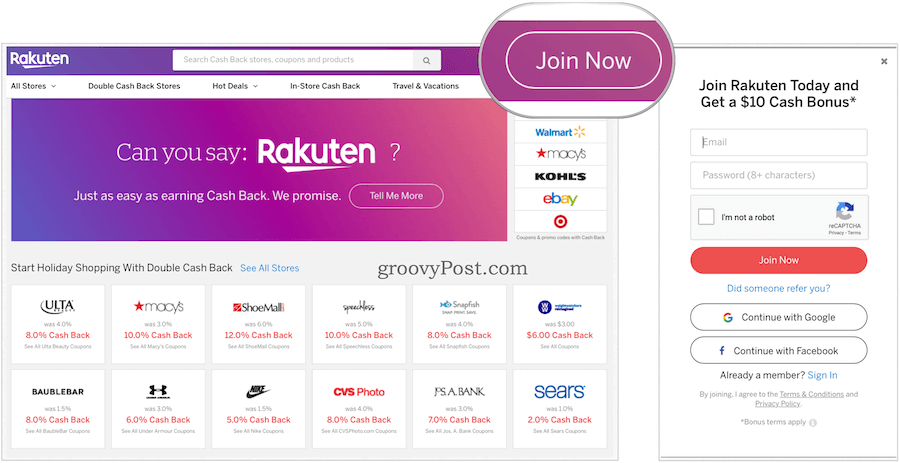 Where to Use It

Rakuten Rewards lets you earn cashback at over 2,500 of the biggest stores and specialty boutiques, both online and in-store. Collected rewards are added automatically to your Rakuten Rewards account within a day of making a purchase. Four times per year, Rakuten sends you those rewards through a check, PayPal, or Bitcoin.

There are various ways to find cashback opportunities, including:

Activating Rakuten Rewards is a straightforward process. In general, it requires adding one more step to your buying process, regardless of where you use it.

Through the Rakuten Marketplace

If you’re sitting at home and shopping online, the best way to find and use Rakuten Rewards is through the official website. The website is organized by Double Cash Back Stores, Hot Deals, In-Store Cash Back, Travel & Vacations, and Refer & Earn. Every Rakuten Reward is assigned a percentage rate. These rates frequently change, especially during the holiday shopping season. Naturally, the higher the percentage rate, the more cashback you’ll receive. 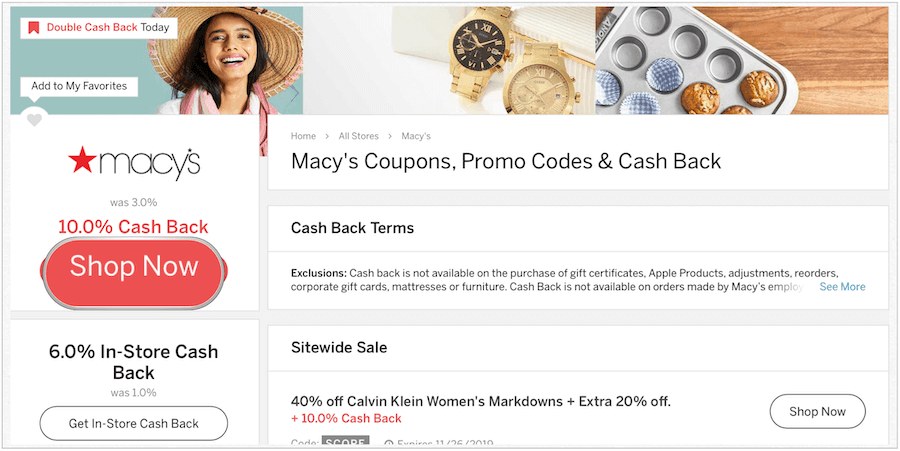 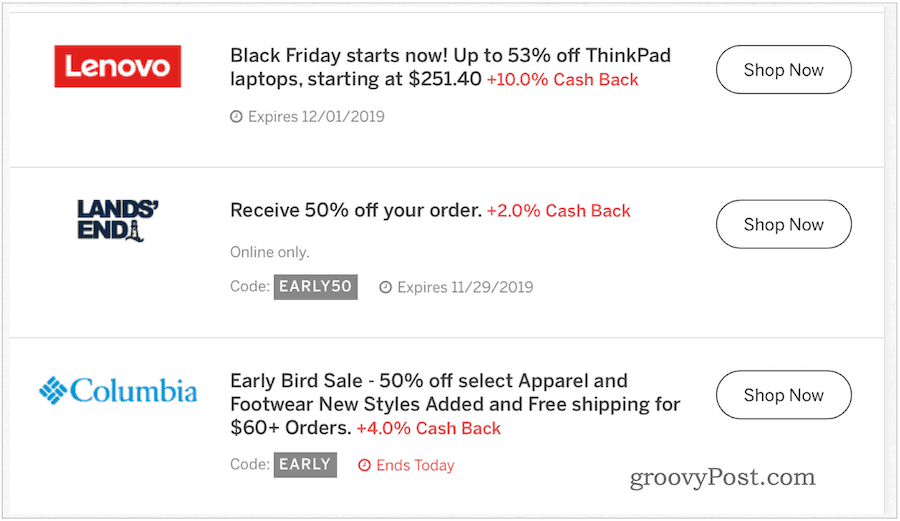 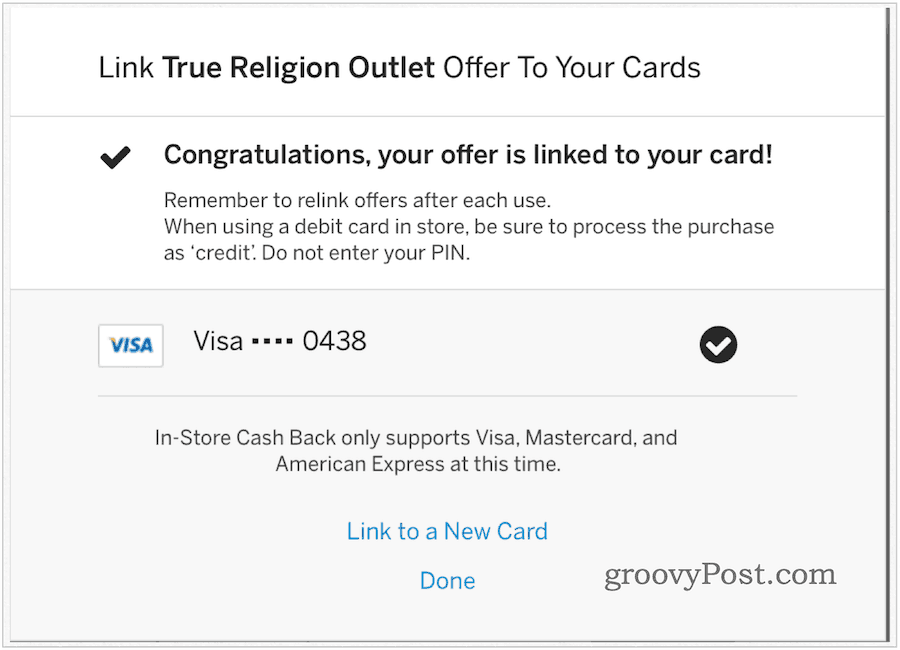 The Rakuten app for Android and iOS looks a lot like the online Rakuten Marketplace. However, it’s much less organized and relies heavily on its search functionality. On the home page, you’ll find the best deals organized by Favorites & recently visited, and Shop by category. There’s also the familiar Double Cash Back stores section. You can also find in-store deals, which you can use directly from the app in your favorite retail stores.

For mobile users, Rakuten offers a special Extra Cash Back section. From here, you’ll find that some of the bonuses from the Rakuten Marketplace are increased. In the following example, Macy’s regular 10 percent cashback bonus is now 11 percent through the app only. 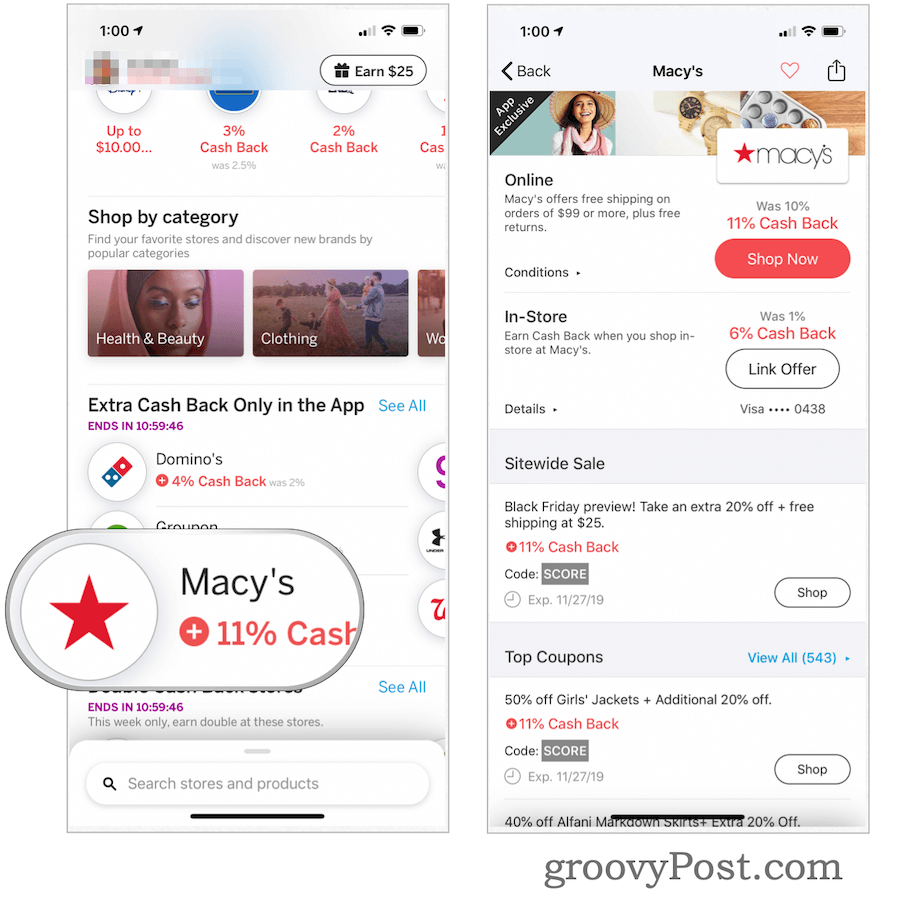 First, when visiting a retail site with ties to Rakuten, you’ll see an Activate button at the top right. Click on it, then receive a cashback on whatever purchases you make from that website. Second, the plugin installs a Rakuten Cash Back button on your web browser’s toolbar. Click on it to find current cashback deals without visiting the Rakuten Marketplace.

You can find and install the Rakuten Cash Back plugin for Chrome, Safari, and Firefox from the Rakuten website. 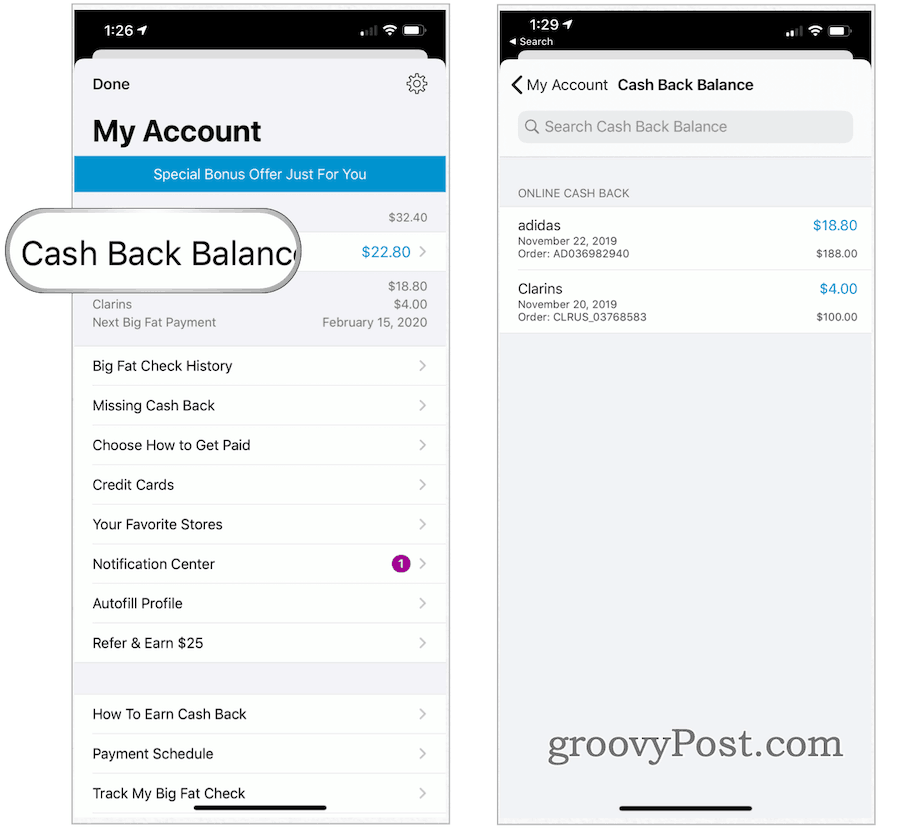 Rakuten offers cashback bonuses from over 2,500 retailers, including big companies like Amazon, Macy’s, Nike, and more. Available through multiple platforms, Rakuten Rewards are simple to score and redeem. All you have to do to get started is sign up and start shopping!