One of my favorite web app companies that have been deserving of some groovy mention is Zoho (my, what took me so long?!!).  When Google unveiled it’s new Google Apps Marketplace Tuesday night, it was exciting to see that Zoho had some of their products on the list.  So with all the news, I figured it’s finally time to give Zoho a groovy mention while at the same time reviewing the latest news over at Google with the launch of the Google Apps Marketplace.  Here’s the scoop!

As you already know, a lot of companies out there have “Gone Google” for their online email and other App Services.  The total amount of current Google Apps users is somewhere around 25 million, so it’s a pretty big piece of pie.  What Google has done with this is introduced an online store similar to the Android or Apple Apps Store.  But instead of selling music and fart apps, this store is designed for direct sales to Businesses, something that can be difficult for most web app developers.  Guess who seized this opportunity?  Yup, Zoho.  Many thought Zoho was going to be a strong competitor to Google with its online apps suite, so it’s no surprise only a few of their services will be made available on the Google platform but still, it’s nice to see Google’s willingness to allow in a few competitors to enhance their offering.

Zoho is a web app development company that offers online productivity, collaboration, and business apps.  Their core apps are natural online contenders to many of the programs found on both Google Apps and the more traditional business productivity software giant, Microsoft.  After a Microsoft VP had made the jab that they were a “fake office” Zoho took it literally and launched http://fakeoffice.org/ where you can see the exact comparison between its apps and Microsoft Office.  Many of the Zoho online apps are free for personal use or limited small businesses. However, they also offer competitive pricing for larger businesses as well boasting ~ 2 million active users.  See the pricing list here: (http://www.zoho.com/pricing.html).

When you visit Zoho for the first time, you can sign up with them using an email address, but it’s much easier to just use an already existing Google, Google Apps (For Businesses), Yahoo, or Facebook account. 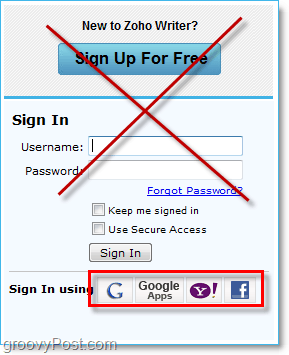 Zoho offers each user their own customized dashboard or online desktop, which allows you to overview all of your relevant and pending information from one place.  From here you can also open up nearly any Zoho personal application and get started immediately. 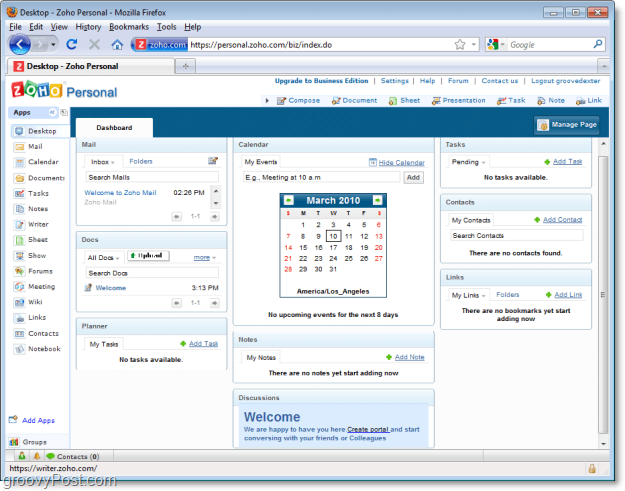 The real useful part of Zoho comes primarily in the online office web apps.  These online web apps pack a lot more features than Google Docs or any other online competitor.  While Microsoft Office may have a few more features offline, the advantage of Zoho is that you get to work “in the cloud” with all of your data stored securely (up to 1GB for free) and accessible from anywhere with an Internet connection.  Speaking of which, Zoho has a very nice privacy policy and terms of use where you maintain your rights and privacy to everything you do on their site.  It is free without the catch, unlike many of Google’s free apps.

Zoho Writer works just like Microsoft Word, and Zoho Mail works a lot like Gmail though I still think Gmail has more features (for now.) Zoho show works like Powerpoint, and I believe that you get a general idea. 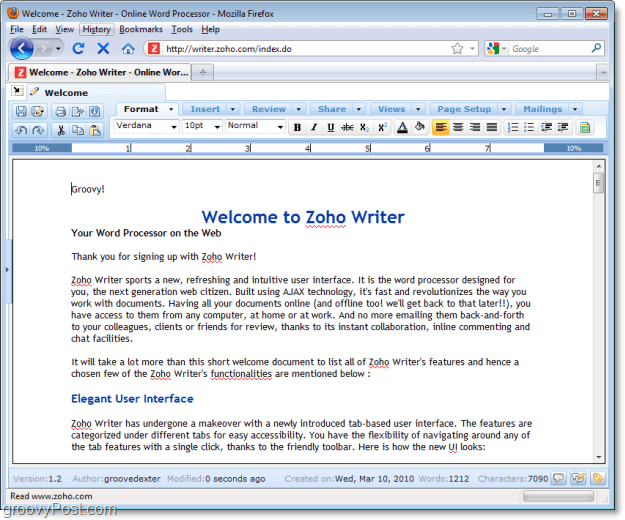 Another groovy thing about Zoho is the ability to switch seamlessly between web apps within the same browser.  Using their “switch to” function you have instant access to nearly all of their apps no matter what app you’re currently using. 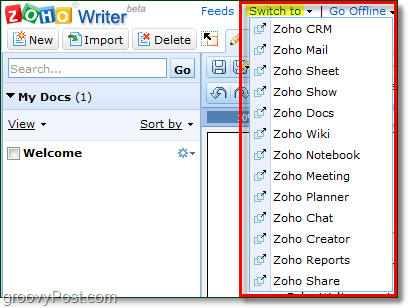 If you’re a small business owner, Zoho has some very useful tools from CRM (customer relation management) to HR, Recruiting, Project Management and even invoicing.  And yes, all of them are free as long as you only need access for a limited number of people.  The Project management app is one of my favorites. And then there’s the Zoho Marketplace which allows you to use other Zoho apps created by other Zoho users using the free Zoho Creator.  Many of these applications are also free including an excellent IT Asset Management System and Customer Support Ticketing System.

Any catch or downside?

Aside from the fact, that Zoho gives away the first taste for free, then hooks you into upgrading to a paid version, no.  The majority of the software is free as I mentioned earlier. And the login is fully integrated using your existing Google, Yahoo! or Facebook account.  This integration makes it very easy to get up and running in a matter of minutes.

If you only use the free apps, they do warn you that they may erase your account if you’re inactive for 120 days. But, they do warn you in advance. I left a test account laying around for longer than 120 days, and today when I logged in, my data was still available.  Seriously, if you don’t use something for six months you probably won’t mind losing it anyway, right?

All in all, a great day for all you groovyReaders.  1 – Google continues to flex its muscle which should continue to drive down costs over at Microsoft. 2 – You just learned a TON about a new groovy service called Zoho AND 3 – All it cost was 10 minutes to read this groovy article from your favorite groovy blog!  Yeah, a good day indeed!

Have you used Zoho before?  Would love to hear any comments, questions, or general feedback below in the comments!