Now you can get a Google Voice account while you can before they’re available to the general public.

Good news to all the readers who want a Google Voice account. Starting 8/13/09, Google announced they would be adding the option for existing Google Voice users to send invites to the service. They also said they will be increasing the number of invitations being sent out for those who have signed up for an invite (just in case you don’t know anyone with a Google Voice account.) 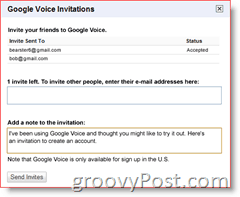 For the first stage of the program, all existing Google Voice users will have three invites each via a link under the Google Voice Inbox. Google said this would slowly increase. Apparently, it’s going to work the same way as Gmail accounts a few years back.

Similar to the best email addresses on Gmail, the best phone #s I’m sure will go fast so now is the time to start sending out emails to friends/family to secure your invite to the service. Granted, I don’t think these will be as hot as a Google Wave account. However, I think, in the end, they will become more useful.

Between groovyDexter and I, we should have 6 Invites (at least.)  If you want one, drop your email address in the comments field below along with a groovy story.