Running into a speed trap is a common reason to end up getting a speeding ticket. One of the best ways to avoid them is by using a radar speed trap alert app on your phone.

You’re driving along, and the next thing you know, you see flashing blue lights in the rearview mirror. Maybe you didn’t realize that the speed limit just changed while you were traveling down a country road. Or, maybe you just started daydreaming and let your speed waver slightly above the speed limit for too long.

Whatever the reason, coming across an unexpected speed trap is the way most people have to pay for a speeding ticket. A great way to avoid them is by using a police speed trap alert app on your phone.

Note: While the links and screenshots for these apps are for Android, most are available for iPhone, too. Just check the app store to download the one that works best for you.

In almost every state in the United States, you’re not allowed to drive while using your phone. For this reason, you must have your phone securely mounted in a smartphone car mount. And that you don’t tap or otherwise use your phone while you’re driving.

Review the apps below, and once you choose one, there are some steps you should follow to use them safely.

The following police speed trap alert apps give you notifications for everything from squad cars parked just after a speed limit change sign to fixed or mounted speed cameras that are cropping up all around the country.

Review these apps, and then choose the one that suits your needs the best.

By far, the best app for getting alerts about police speed traps is Google Maps. Unfortunately, this feature was only recently added, met with some disapproval by most law enforcement agencies.

It’s a community-powered feature. Meaning that a passenger in your car can tap the up arrow at the bottom of the Google Maps display and then tap Add a report. 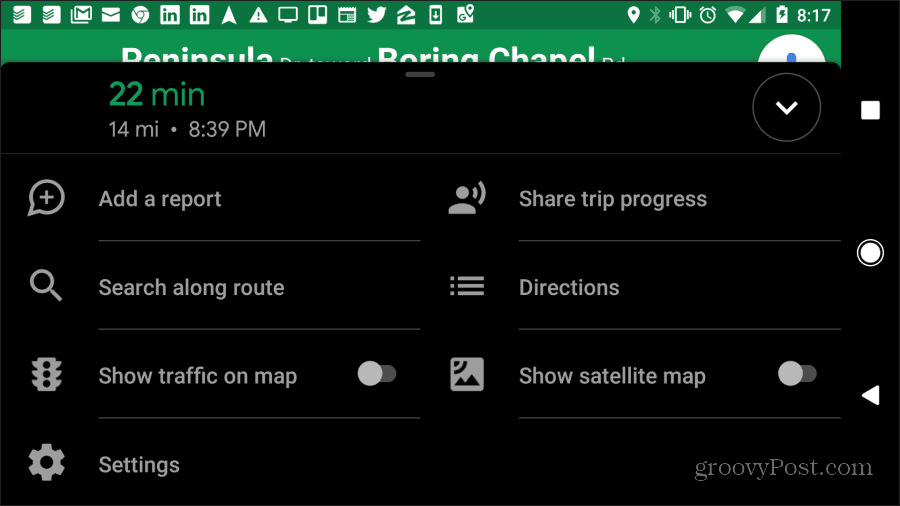 There are a variety of reports you can issue, including crashes and slow down. But this new feature added Speed trap to this screen.

By tapping Speed trap, you’ll add your current location as a speed trap alert hotspot for other drivers coming up behind you. 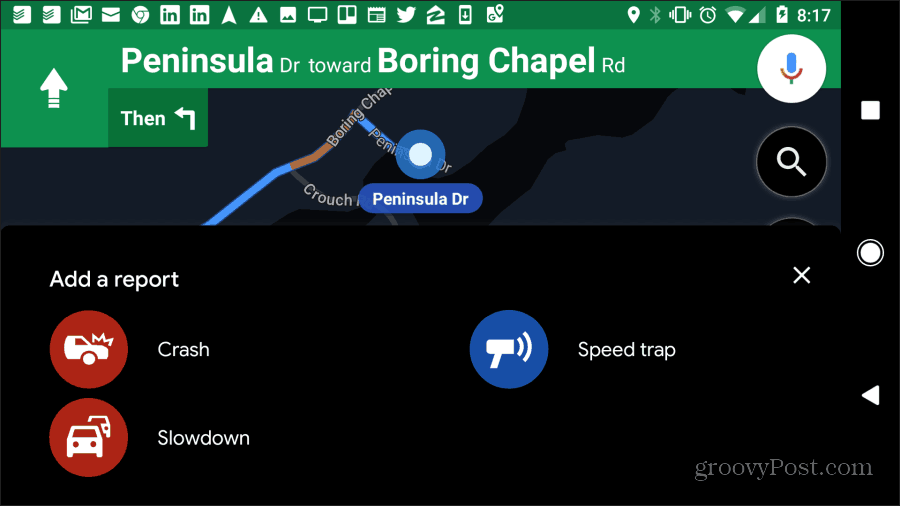 For years, drivers have flashed their headlines at cars coming in the opposite direction to warn them of an upcoming speed trap. This new technology is just the next generation of that approach.

After a period of time, vehicles behind you who also use Google Maps will see an alert asking them if the speed trap in that location is still there. Until someone notifies Google Maps that the police officer has left the location, the speed trap icon and the real-time alert will remain for all users in the area.

Another popular app used by many drivers is Police Detector. This app will provide you with both location icons and a warning for both police in the area and a fixed radar detector unit in the area. 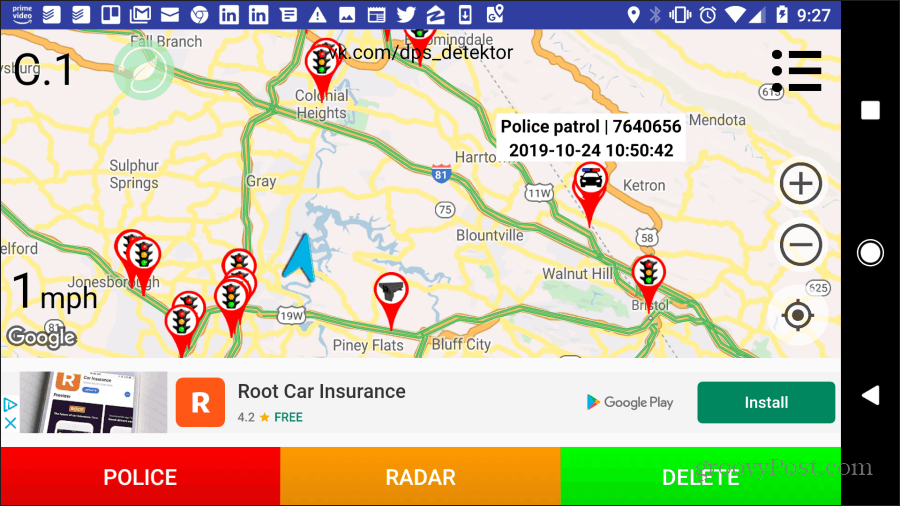 This app is also community-based. As a user, all you need to do to report either a police unit or stationary speed detection device is tap either the Police or Radar buttons. This immediately places the appropriate icon on the map for other drivers to see.

This app has a significant user base, so you’ll likely see plenty of icons and alerts in your area. It’s a great app to use if you want to avoid areas that carry the highest risk of receiving a speeding ticket.

One downside is that you have to tolerate an ad banner at the bottom of the app during use.

Another useful app if you live in an area with a high number of fixed-speed camera detectors is the Radarbot Speed Camera Detector app. In addition to being a navigation app, Radarbot also alerts you to various issues that may slow down your travel. 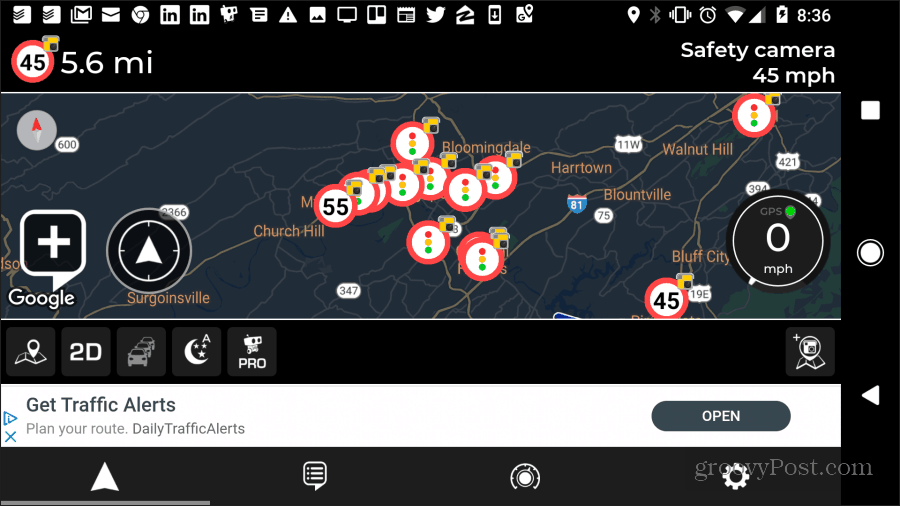 If you tap the + icon at the lower left of the map, you can quickly tap one of six icons to report traffic issues like: 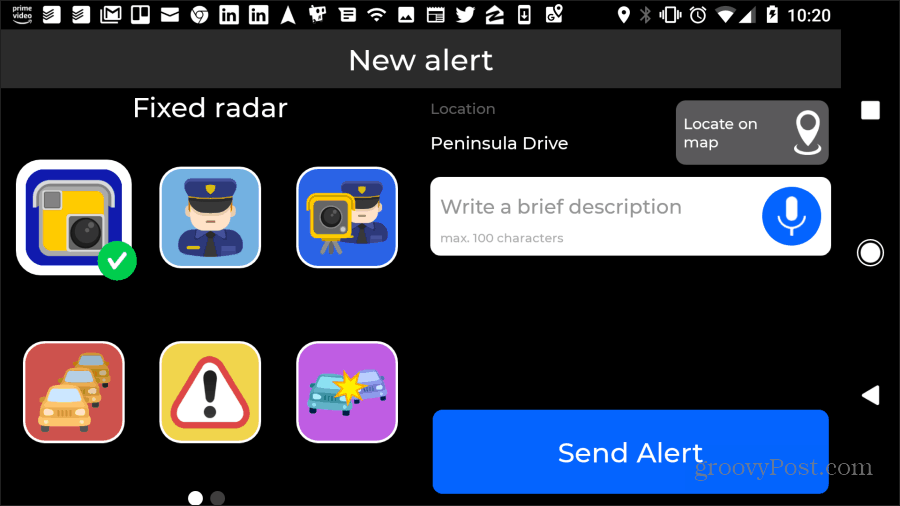 Your passenger can also take the time to write out some alert text to let other drivers know what danger exists on the road in that area.

If you’re more concerned with speed cameras than speed traps, a good app to go with is Speed Cameras and Radars.

Like other apps listed here, there are quick-tap icons on the screen for reporting. In addition, there are icons for traffic light cameras, fixed cameras, or mobile cameras. You’ll receive alerts whenever you’re approaching any of these. 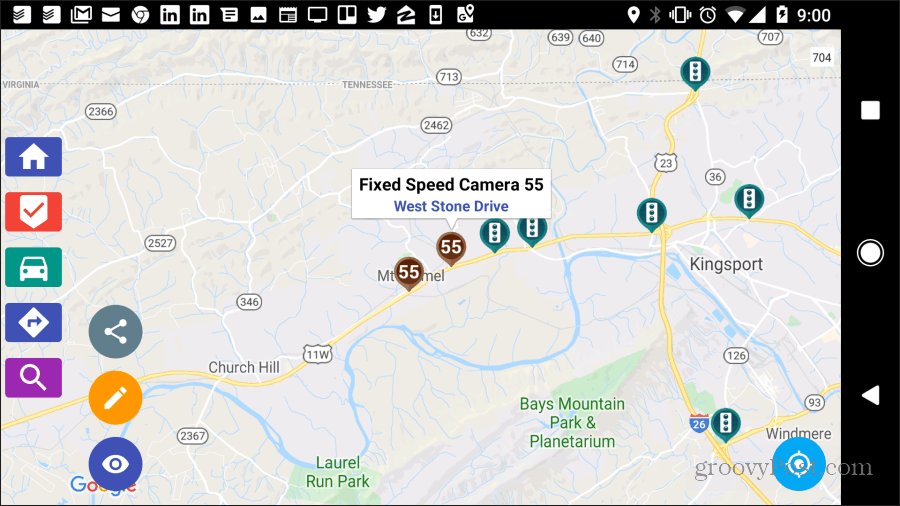 Filing a report involves opening the menu and scrolling down to the social section, where you’ll see Report speed camera. 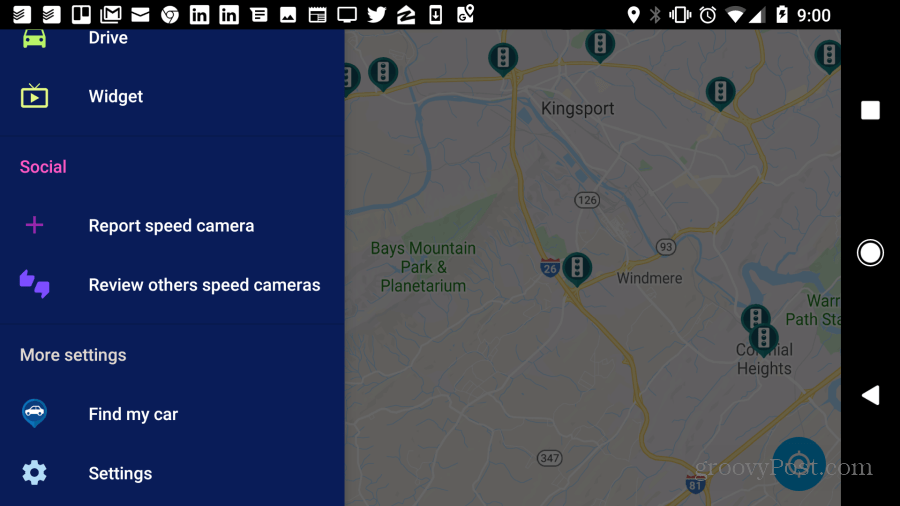 Your report will show up to all other drivers. Keep in mind that this app includes full-page ads, so only use them if they don’t bother you.

The Sygic Navigation app is one of those navigation apps you’ll probably wonder why you never tried before.

It has most of the same features as other popular navigation apps like Google Maps and Waze. It will also alert you to the distance you are from the nearest speed camera from your location. 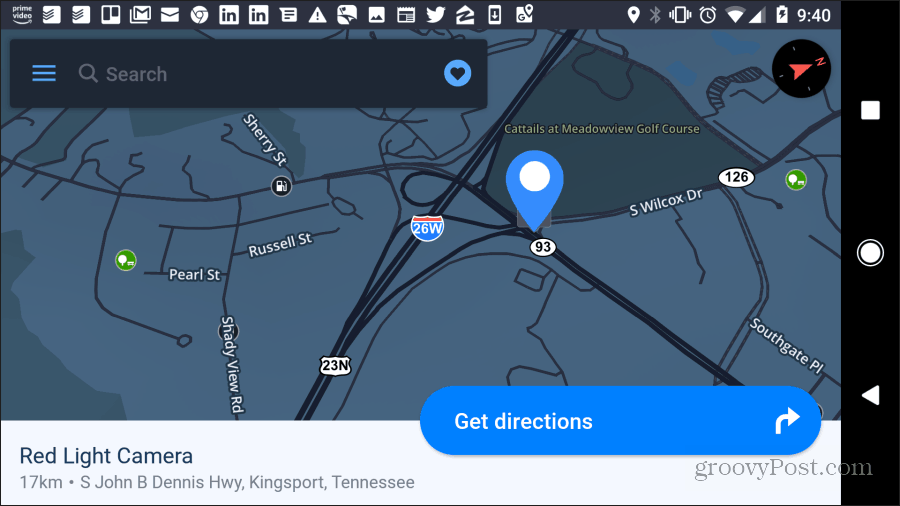 However, it has the added benefit of alerting you if you are exceeding the speed limit. In driving mode, you’ll see your current speed at the lower right corner of the screen. 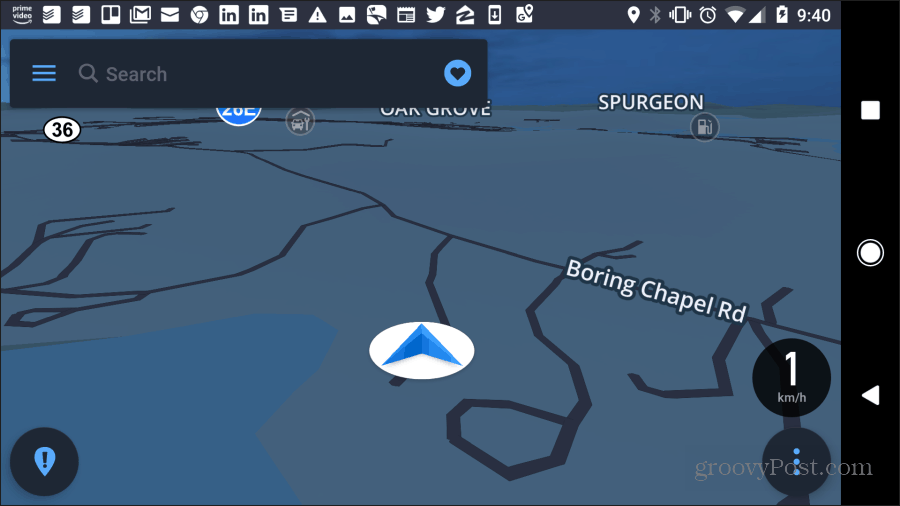 Should you exceed the speed limit for the road you’re traveling on, you’ll see an indicator next to this speed alert. If you feel like the easiest way to avoid speed traps is to not in the first place, Sygic can help.

Last but certainly not least is the Waze navigation app. Waze is, by far, one of the most popular GPS driving navigation apps, second only to Google Maps.

This is largely due to the social aspect of the app, and one of those social features is the ability to file alerts that other Waze users can see. You can get to the reports area from the main navigation display by tapping the screen and then tapping the icon that pops up that features three vertical blue lines.

This brings up a menu where you can modify the display, including a Reports feature. 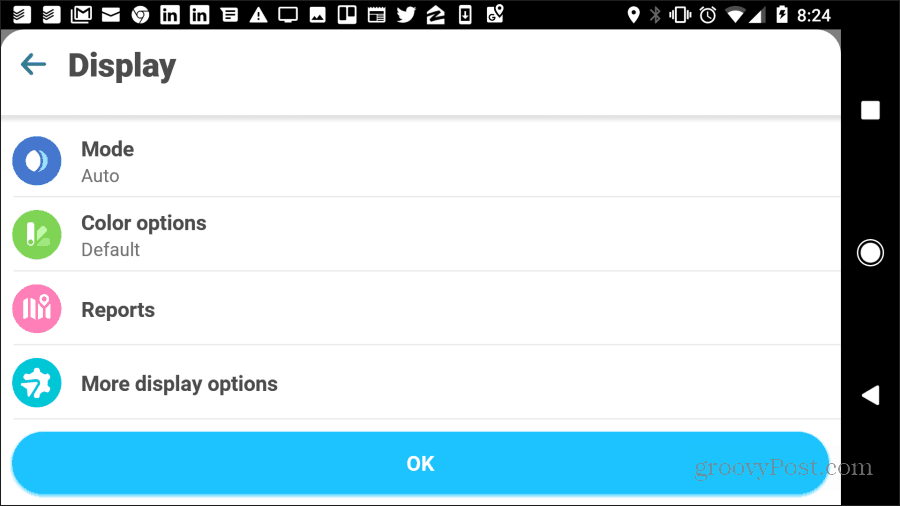 In the Reports menu, you can tell Waze what issues you want to be alerted on. Make sure at least Speed cams and Police are both turned on. 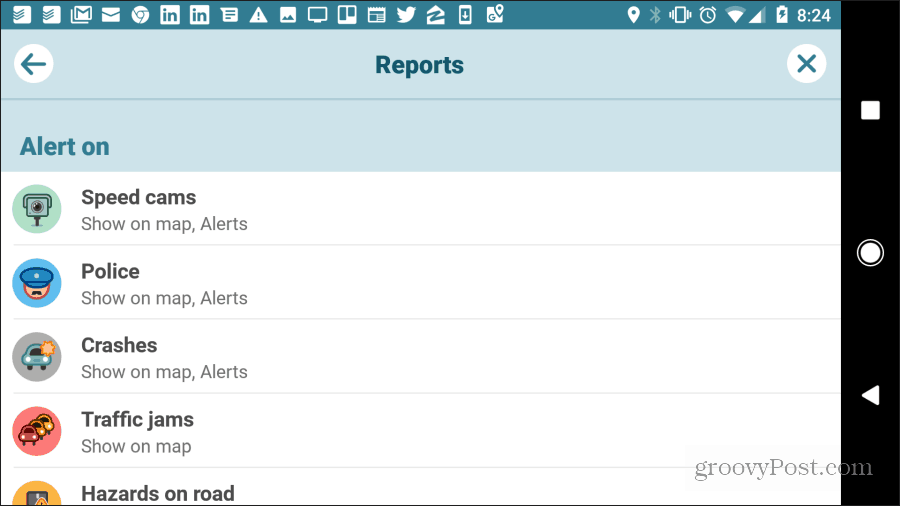 You can also issue your own reports by tapping the small orange comment logo at the lower right. The nice thing about Waze is that there are no annoying ads. And there’s a massive user base to interact with.

Many people will say that if you don’t want a speeding ticket, then don’t speed. Still, people who never speed may absent-mindedly drift over the speed limit. Or, you may be traveling in a new area and not aware of a sudden speed change.

Using police speed trap alerts is not a license to break the law. None of these apps will update fast enough to protect you if you’re speeding excessively. But if you’re taking a drive and don’t want a speeding ticket, these apps can help.